I decided to change our Autumn sensory box a little this week. I took out all of the VERY dried up leaves and added some corn to the tray. I just bought a bag of uncooked popcorn from the supermarket and poured it in. It made a really nice base for the tray and gave it a real Harvesty feel! 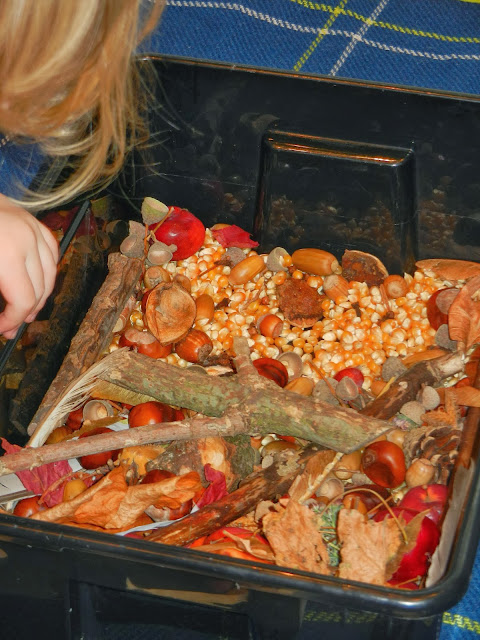 I also offered out the sorting trays to see  if the children would re create the sorting activity from last week or if they would use them in a different way.
Little “I” started to add items to the boxes and used her previous knowledge and experience to start sorting the items in the tray. 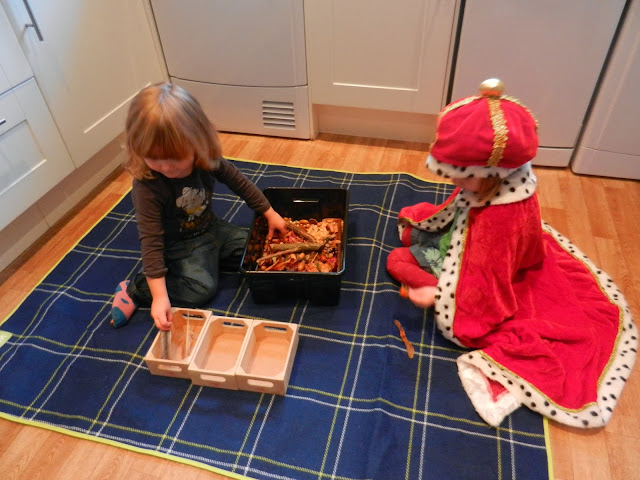 Little “X” came in and asked “What are you doing?”
“Looking at our Treasures!” was little “I”‘s response. 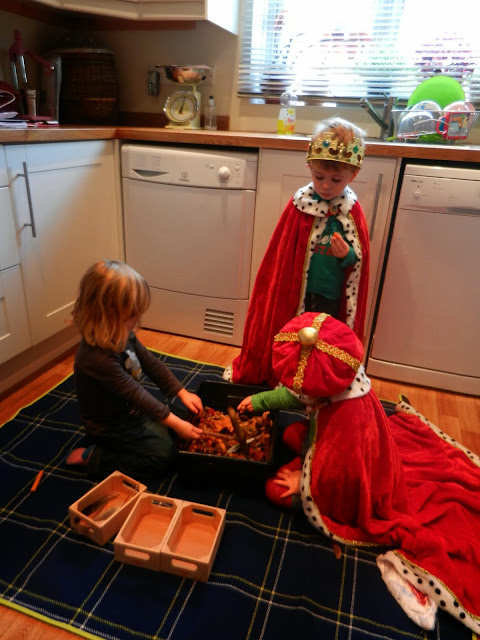 He ran off and came back with 3 magnifying glasses. He handed them out to each of the girls and kept one for himself. I told him that was a really lovely thing to do, very thoughtful and the girls thanked him. He smiled with pride and then sat down and held the magnifying glass over the tray. The girls both held theirs up to their faces. 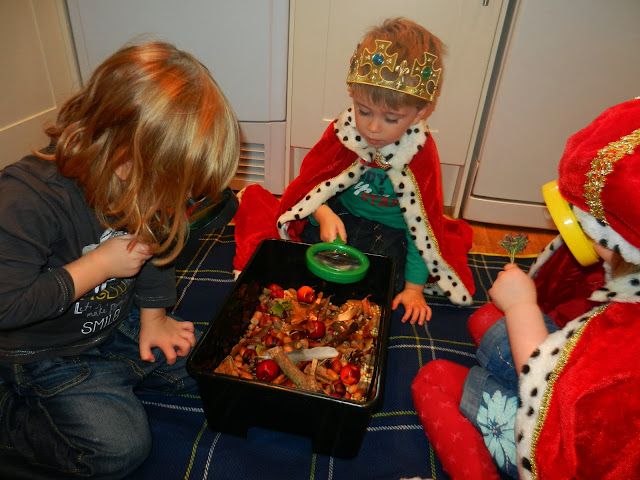 He told me that things were bigger. The girls were laughing and looking at each other through the magnifying glasses and that made them laugh even more.
I asked the girls how things looked if they held them like Little “X”. 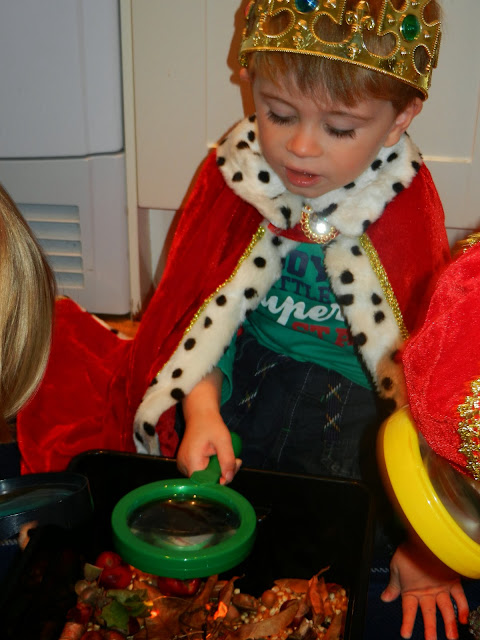 Little “I” gathered up some corn in the palm of her hand and carefully held the glass just above. I watched her move the glass up and down to alter the level of magnification and to make the image clearer. 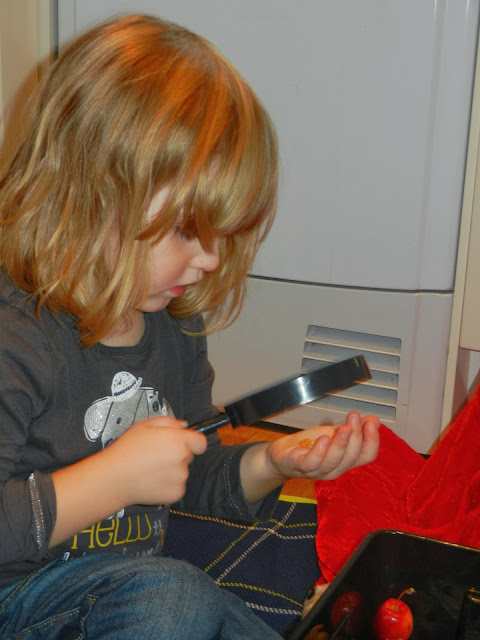 Little “R” put her flower over the top of the magnifying glass. I asked her if the flower looked different. She had been listening to the others say that things looked bigger so her reply was the same.
“It makes it bigger!”
I asked her again if she thought it looked bigger and she looked a little confused. She looked at me and said “No”
I smiled back at her and gently moved her hand with the flower in, under the magnifying glass and  slowly moved it up and down.
She suddenly looked excited. “It’s bigger Pip!” 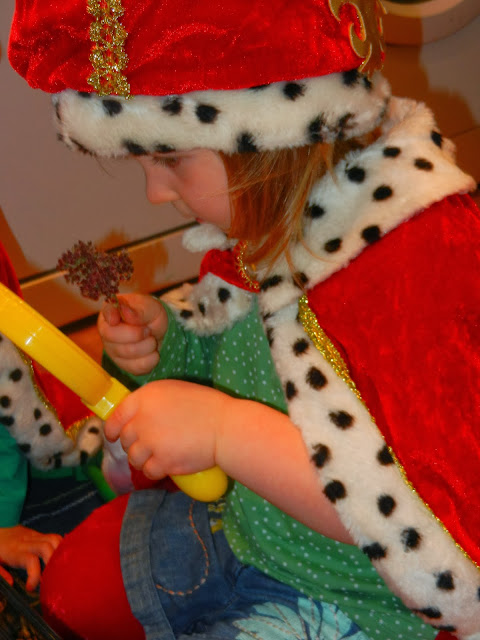 I explained that the magnifying glasses make things look bigger than they are so that we can see all the little details in things. I pointed out all of the little flower buds on her flower. She could even count some of them now that they were bigger and easier to see. 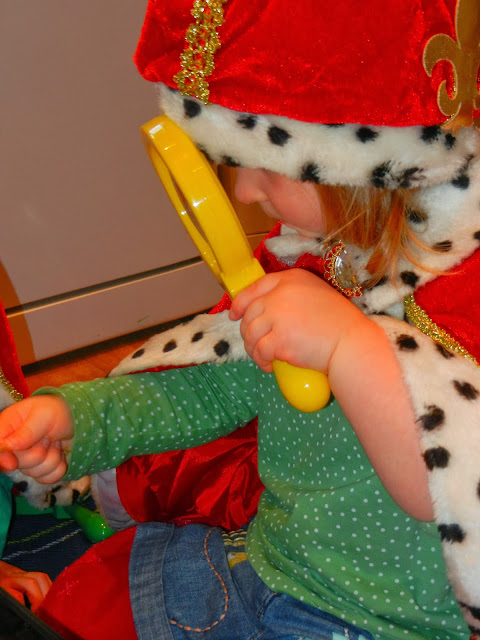 CHARACTERISTICS OF EFFECTIVE LEARNING:I offered this activity thinking that the children would revisit a previous activity. That they would further strengthen their sorting skills. This did happen for a few minutes but very soon the children lead this off in their own direction and once again took control of their learning. I really love it when children do this! They are much more engaged and motivated when they are leading their play experiences. They become so involved and immersed. Little “R” knew that she was meant to be seeing what the other children could see but when asked again she stopped and thought critically about it all. The truth was, she could not see what the others could see. Her flower looked just the same. Until I placed it under the glass and then she really could see what her friends were seeing! The flower became bigger!
Little “I” worked with what she already knew when faced with the sensory box and sorting boxes and used that knowledge to start sorting the items and grouping them.
Little “X” had worked out that there were 3 children playing and so he needed 3 magnifying glasses. I would love to know if he counted them in his mind or if he named the magnifying glasses as he selected them so that he knew how many he needed. I find these little mysteries quite exciting.

SCRAP SESSION AT OUR TODDLER GROUP!