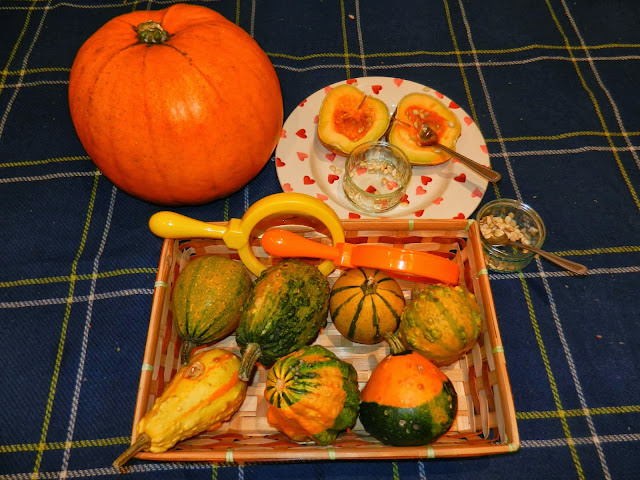 Over the next week we are building up to our Halloween week of fun which starts next Monday. The children always have a great week carving pumpkins, mixing potions, dressing up and cooking Halloween treats.
I introduced the Pumpkins and Gourds this morning and set them up as an invitation to play. I like to see how the children approach the new items and how they choose to use them.
Little “L” started the morning by using the large Pumpkin as a seat. Every now and then she would slide off and then giggle while she climbed back on again.
After a while she told me that she was going to sleep on the Pumpkin and made a bed next to it using the dolls cushions and blankets.

Once we had picked up Little “R” from Pre-school and had a spot of lunch, the girls came back over to the Pumpkins and Gourds and started to turn a Gourd over in her hand. feeling the bumps on its surface and talking about the yellow and the green of its skin.

She asked me to cut it open so that she could see what was inside. It was rather tricky to cut but once we had managed it we got to explore the soft pale flesh and the seeds hiding within!

Little “L” and “R” spent some time taking the seeds out from the centre of the Gourd. Little “L” used the magnifying glass to look at them more closely. I had to remind her that the seed needed to be held under the glass so that it would look bigger. 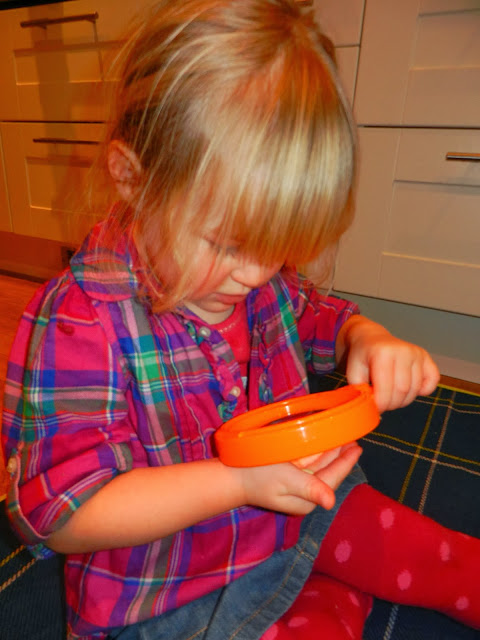 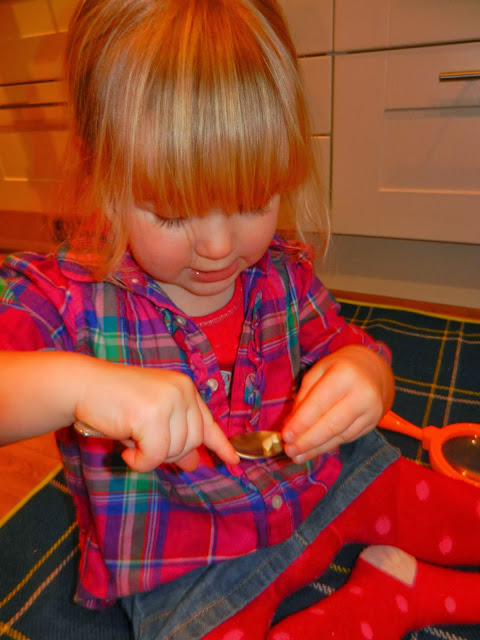 The girls used tea spoons to dig out the seeds and then used their fingers to separate the seeds from the stringy middle that held them in. 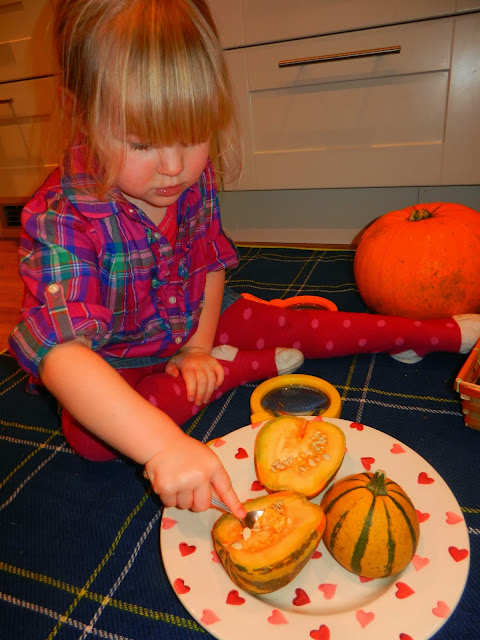 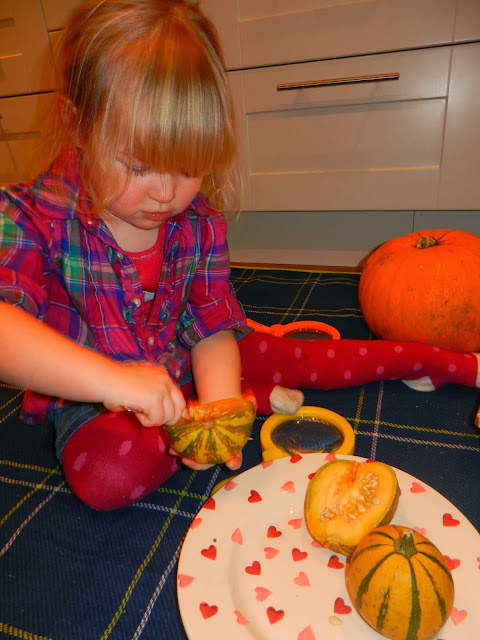 Little “L” and I had a conversation about the open Gourds.

“What’s inside the Gourd?” I asked
“Seeds”
“That’s right, what do you think we could do with the seeds?”
“We tan’t eat them, we will get a tummy ache” Little “L” replied
“Why do you think the Gourd has seeds in it L?”
Little “L” was very quiet and looked thoughtful. So I asked another question
“What happens when we put seed in the ground?”
“The Tows (cows) eat them!!”
I smilled, that was not an answer I had been thinking of!
Little “R” was listening carefully and answered this one
“They grow a Tree!”
“That’s very close, the seeds grow in to Gourd plants. If we plant this seed it will grow in to another Gourd plant and grow Gourds like this one!” I explained

Little “L” put 2 magnifying glasses over her bowl.
“They getting bigger now” 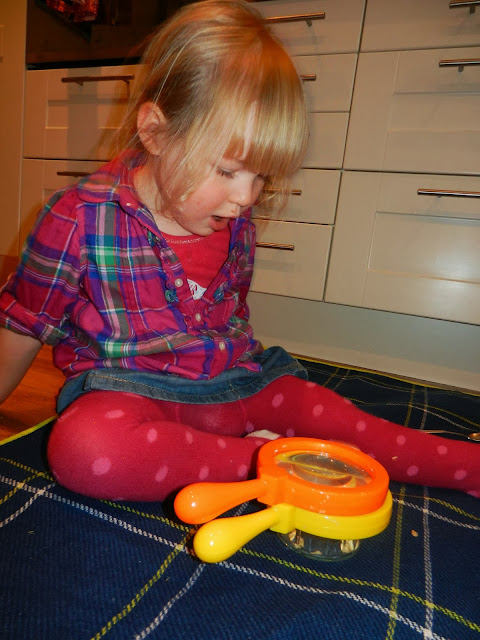 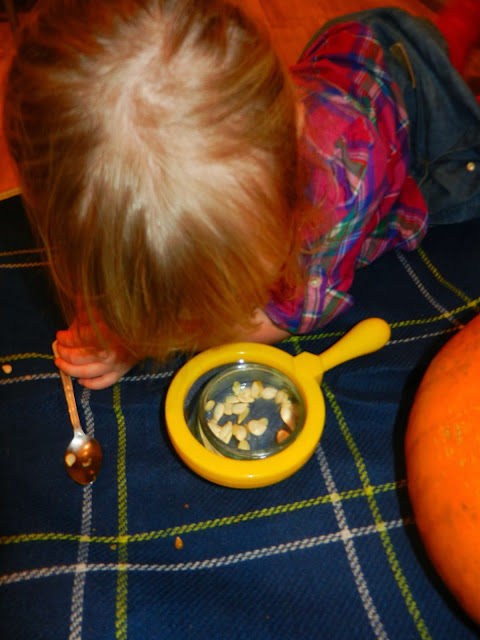 She took the glasses off again and then looked a bit sad.
” My seed not getting bigger”
“No. we would need to plant them in the mud for them to grow. Like we did in the spring when we planted all our vegetables.”

Meanwhile Little “R” was very carefully spooning out her seeds and telling me she had lots in her bowl! 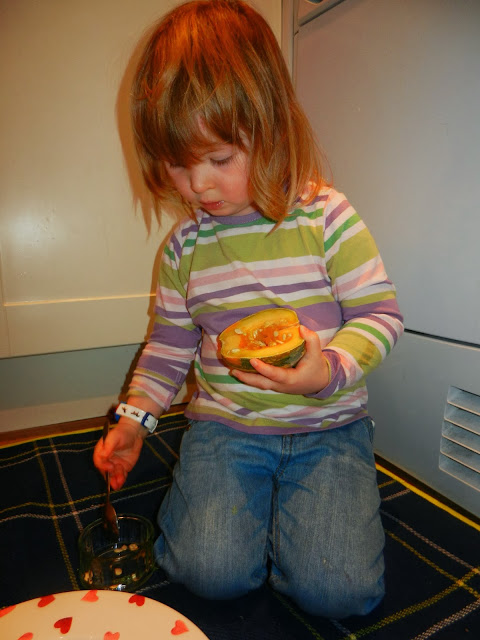 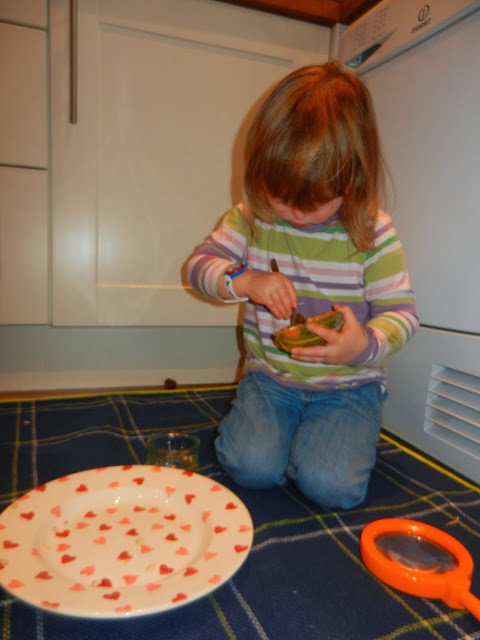 Little “L” had replaced the magnifying glass over her jar and was willing them to grow. Every time they had the glass over them, they looked bigger. But when she removed it they looked as small as they did to start with. It was very frustrating for her. 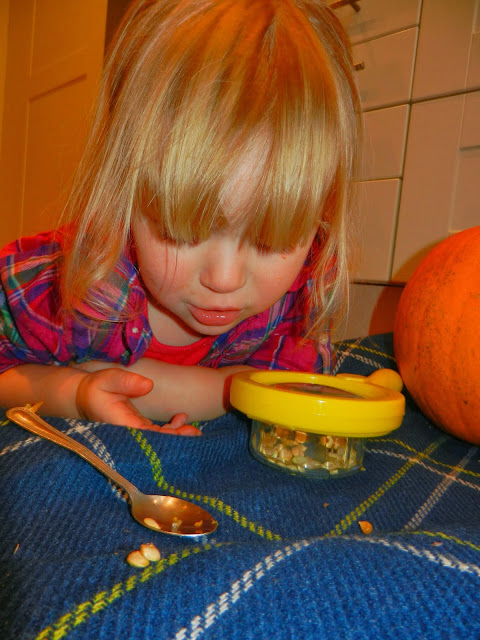 After a while we moved on to looking at the whole Gourds again.
Little “L” thought it would be good to make one of them a baby!
“Look Pip, Its my baby! I’m giving it a tuddle!” 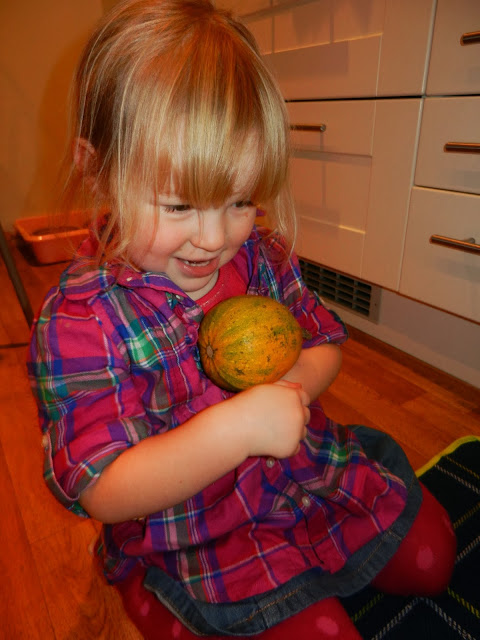 We lined them up and counted them. 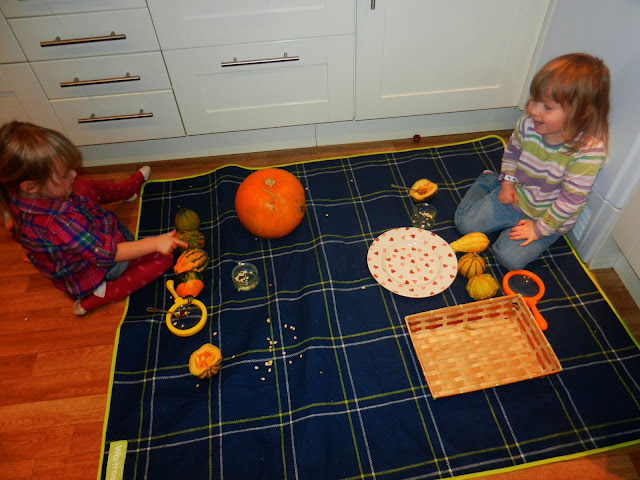 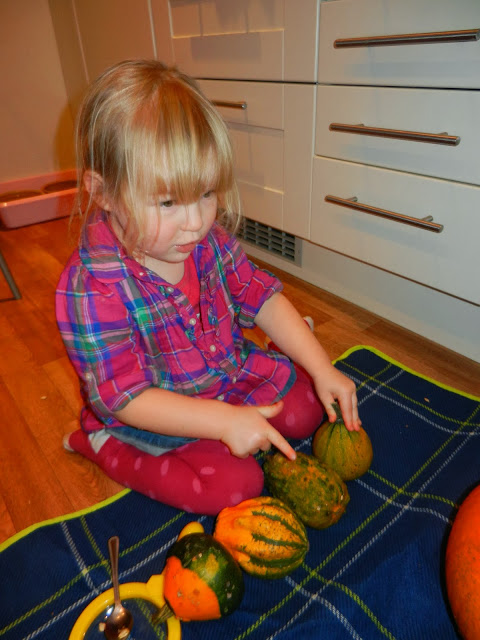 We gave them names as well. Little “R” said one was her, one was mummy and one was daddy! 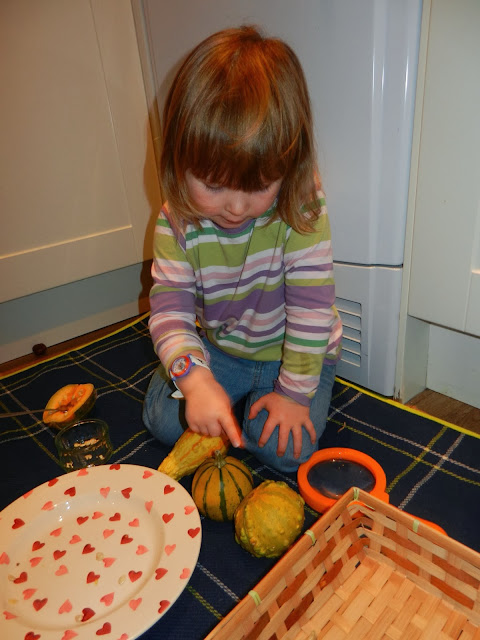 CHARACTERISTICS OF EFFECTIVE LEARNING:This activity has provided the children with a hands on experience of Pumpkins and Gourds. They have been able to hold them, talk about the smooth skin on some and the bumpy skin of others. Describing colour and weight. By cutting them open we have revisited our knowledge and past learning about seeds and how plants grow. Reinforcing this concept in their minds. We have many books that show how Pumpkins grow and how they can be used but there is nothing better than exploring the real thing. Using all our senses to learn about them. When we cut open this Pumpkin, we will use it to make a Pumpkin pie. The children will be able to taste it and smell it and will have the pleasure of preparing it. Mathematical concepts like grouping items that are similar to look at, or similar sizes or shapes are encouraged and counting opportunities are plentiful. How many Gourds do we have. How many are yellow? can you find me 10 seeds?
The children were engaged and interested. Motivated to learn by feeling free to touch and explore them. Not only were they finding out and exploring but they were making links to how they have used Pumpkins in the past or how they have seen them in books. They had their own ideas which they shared with each other, taking turns to listen and join in. Turning their Gourds in to babies and family members!
Little “L” worked through a confusion over why her seeds would not grow and why they sometimes looked bigger under the magnifying glass but were small again when she tried to take them out. She had to challenge her own understanding and thoughts on this and think critically about what was happening.