Little “T” is a real music boy! He asks for “Row your boat” by sitting on your lap and rocking back and forth, he responds with pleasure and excitement every time we have a singing session and on this particular day he self selected the instruments from the shelf and spent over half an hour exploring them. 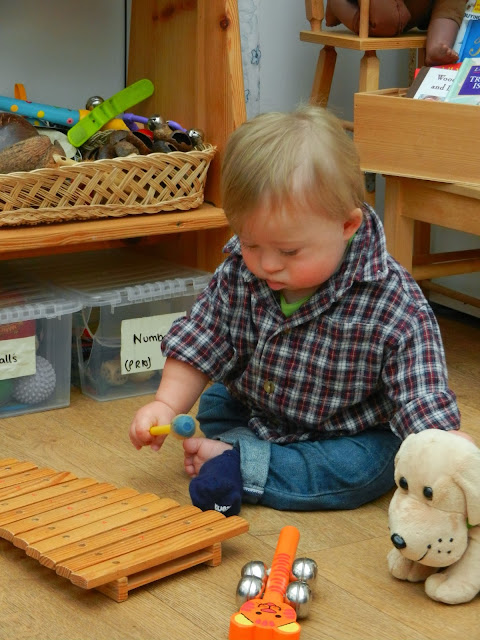 I love these pictures! I did of course make sure he didn’t push this too far in to his mouth but he was getting such pleasure from exploring the beater with his mouth and then making a noise around the side of the stick while it was in his mouth. 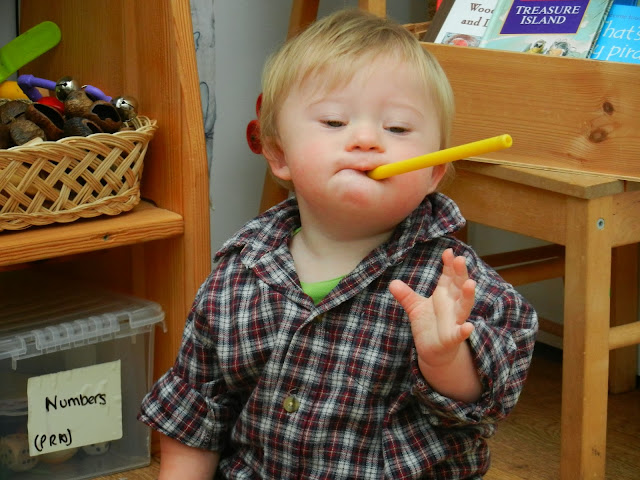 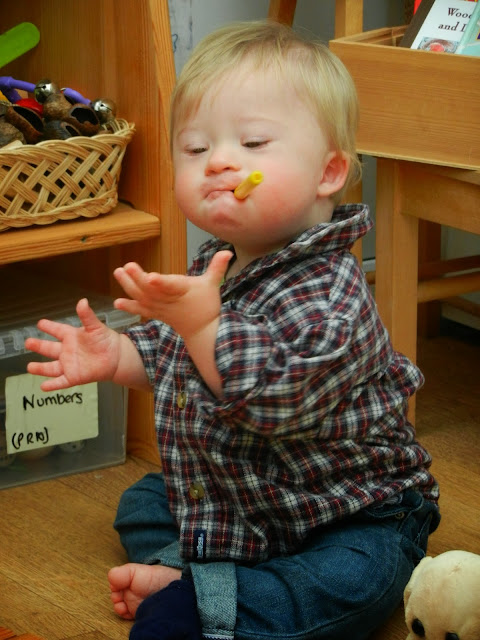 It was interesting to watch him try to grasp the stick with his hand while it was in his mouth. Every time he moved his head to try and see the stick, it of course moved the stick as well… this made it tricky for his hands to grasp at the stick end.
It did encourage some good mid-line cross over which is important in itself. Children need to learn to do this so that they can judge speeds and distances as they get older and it is shown that children who do not have this skill have many problems with reading and writing. Little “T” is just starting to move his body in to a crawling position and has managed a couple of coordinated shuffles of his hands and knees to move forwards slightly. Crawling really is the most important milestone for this to develop and it is the first time a child uses their eyes and hands to cross the bodies mid-line. Children should not be rushed through the crawling stage as it is doing some very important jobs when it comes to brain development. 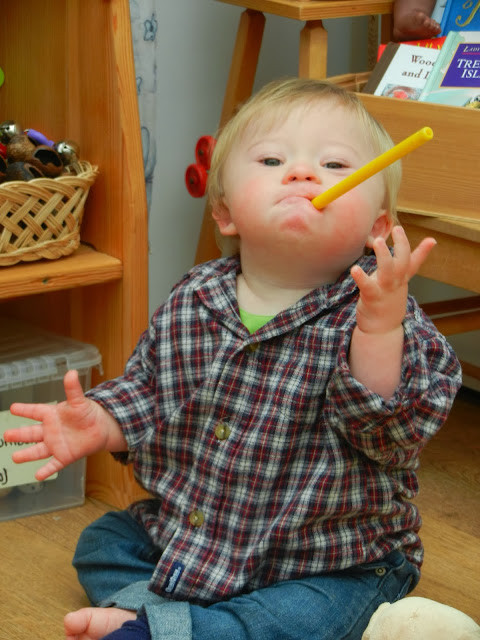 I watched as Little “T” used the beater to make noise as he rolled it along the Xylophone. Again he rotated the trunk of his body to make the beater reach the far end of the Xylophone, more mid-line crossover 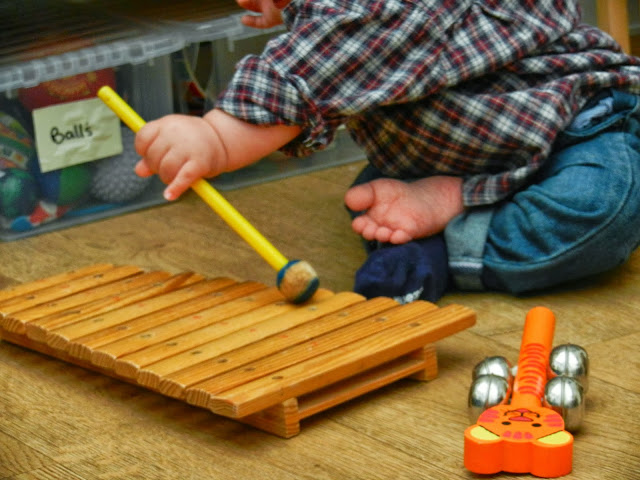 One by one he reached in to the basket on the shelf and pulled out different instruments. Each time he explored it first with his hands. Looking at it as he handled it. Then he would bang it against something and explore the sound it made and he would also bring it to his mouth to taste it. 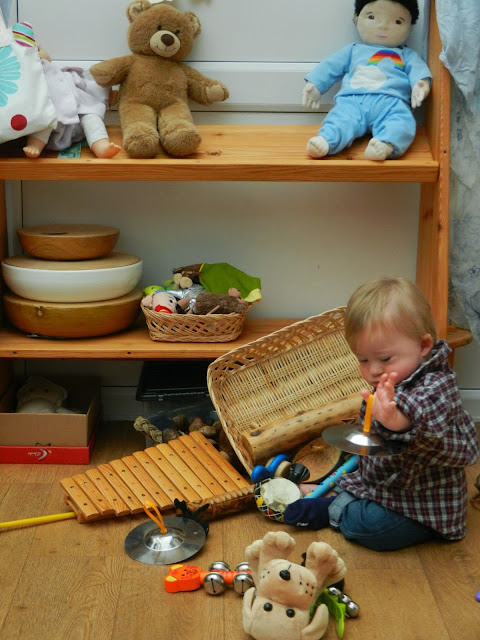 Bit by bit the shelf was emptied of its contents. Every now and then we sang a little rhyme while he made a noise with the instruments. He smiled and made sounds, interacting the whole time with me and the instruments. He listened carefully to the sounds I made and watched my face with intense concentration. Taking a moment to form his mouth in to the same shape and then reproducing the sound for himself. We spent a long time practising this language and speech development. Taking turns and responding to the sound made. I changed my sound and he would copy the new sound each time. 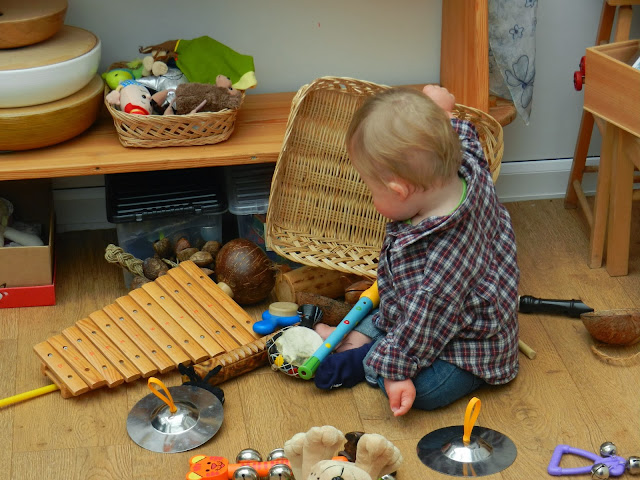 After about half an hour he moved on to the basket of finger puppets. We use these as song prompts. The children can choose a puppet and we sing a song linked to it. This is especially helpful for children who have
not yet learnt to talk or for children who have speech delay. The understanding is there much sooner than the ability to voice it and so by offering the puppets, children can select their favourite songs during our music sessions. Every puppet Little “T” selected, I sang the the song connected to it, to him. 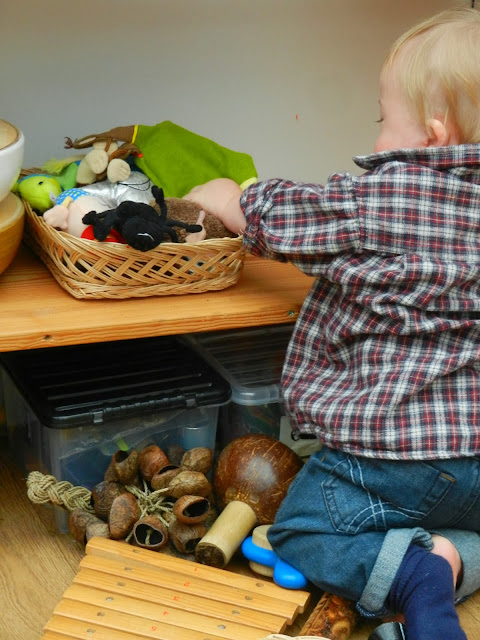 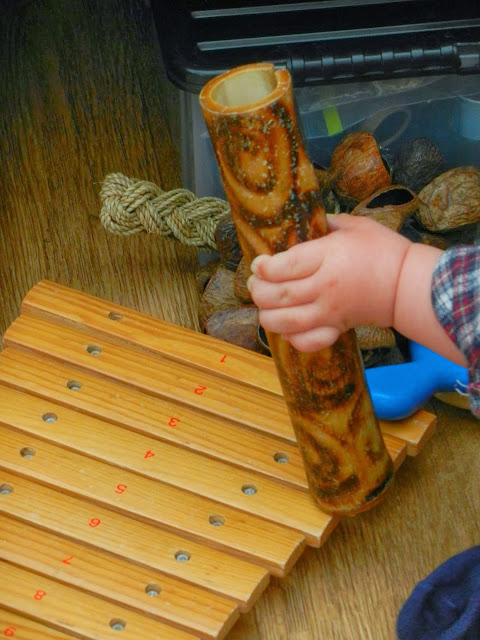 Once both baskets were empty he found the shelf itself interesting. It was just the right hight for him to lean on and to pull himself up. 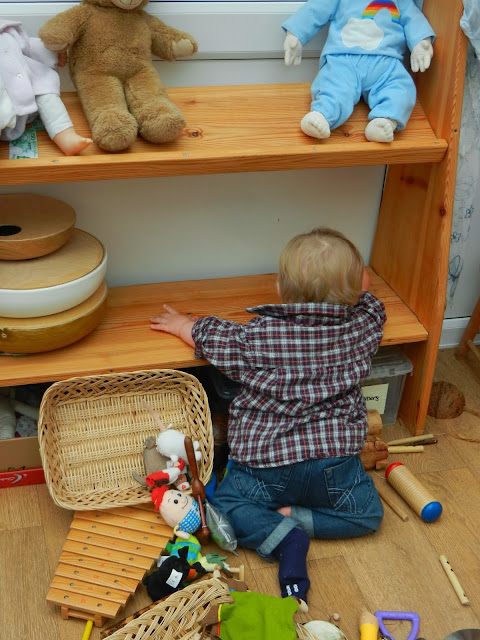 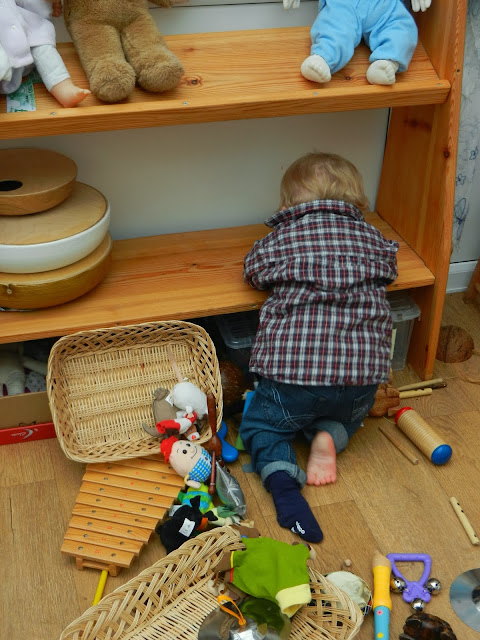 CHARACTERISTICS OF EFFECTIVE LEARNING:
During this play session, Little “T” had self selected what he wanted to do. He had moved himself in to a position by the shelf and had chosen to look at the instruments. This meant that he was motivated and engaged on this activity. He was following his own interests. As he selected the instruments he was finding out about them and exploring them. He Made sounds with them, held them in his hands, manipulated them, passed them from one hand to the next, using his mouth to explore the taste and textures of the instrument. Experiencing the cold metal on his mouth or the warmth of wooden ones. The whole time he had his ideas of what he wanted to do and achieve and was content in his learning experience.
We spent valuable time sharing face to face time. learning the basic skills of conversation by taking turns and repeating sounds back and forth to each other. Listening and copying. Non verbal communication was shared as Little “T” held up the puppets to hear another song. In time he will associate each puppet with a song and this will make it easier for him to chose the ones he would like us to sing.
There was a lot of physical development taking place here. Fine motor skills as he explored each instrument and again when he formed specific shapes with his mouth to make the same sounds as I was making. Larger Gross motor development as he pulled himself to standing and then balanced himself, then lowered himself back down again. This is still a very new achievement and is very much in the emerging stage. He still needed my help to stay balanced and to reposition his legs for him as they started to slide out from under him before sitting again.