Nearly 2 weeks ago I posted about a mud sensory tray that I had set up in the garden. Unfortunately the weather has been so rubbish since then, we have not really enjoyed it as much as I had hoped. We have had a couple of chances to have a little explore though.
We set the scene for this sensory tray by reading Jaspers Bean stalk and planting our own Bean plants in jars to watch the Bean brake open and the roots and shoot come out.. We had a conversation about what plants need to grow. Water, sunlight and soil to grow in.
The tray itself just has compost from the local garden centre in. I would have liked to have some top soil but I did not have access to any extra  soil so decided compost was probably the next best thing.
I lay out watering cans, digging and raking tools, plant pots, a couple of jars of beans, buckets and some spinning windmill decorations that the children cleverly utilised as flowers for their pots.
I lay all the items out and just stood back. Watching how the children approached this. Little “R” and “L” got stuck in right away. They filled buckets and  pots with soil. Using the spades to transfer it. They experimented with the rakes but very quickly worked out that these were not great for the task and went back to the spades.  While this was going on, Little “X” stood back and just watched. He picked up the dinosaur watering can and hovered around the edge of the play. Every now and then he would step in a bit closer and comment on what the girls were doing.
” R dig it” 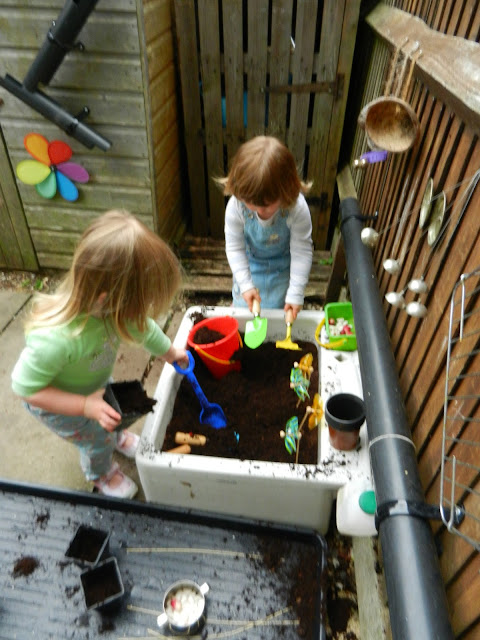 Before long little “R” noticed the Beans in the tray and told me she was growing a beanstalk. She was very focused on using a bucket while Little “L” had started to fill plant pots and was laying them out on the floor next to her. They both placed Beans in their pots and then proceeded to cove them up with more soil. 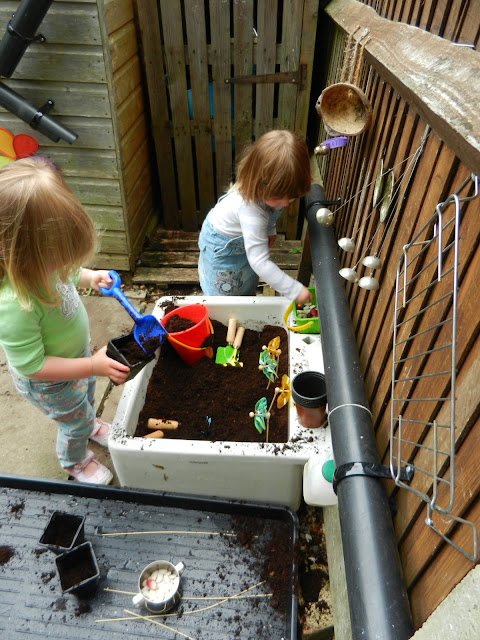 Little “R” started to use the rake to pull soil on to the spade. This was interesting as I have been showing her how to use a knife to push the food on to the fork at meal times and she was drawing on this knowledge and transferring it to other areas. 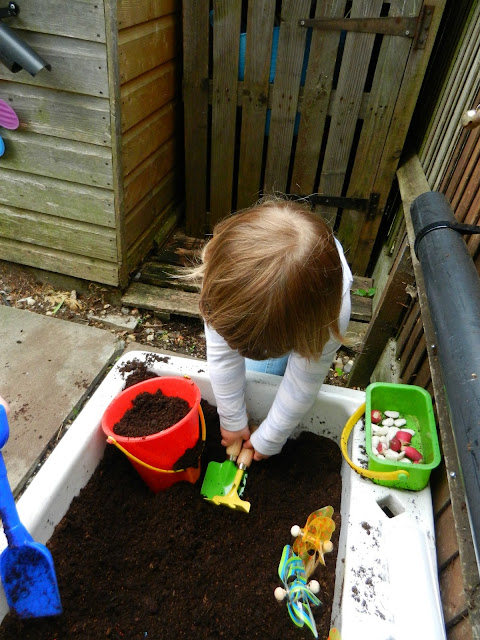 Little “L” seemed to have the planting process very much secured in her understanding. She had a clear task to complete and didn’t seem to need to think about the stages as she set about planting her bean. 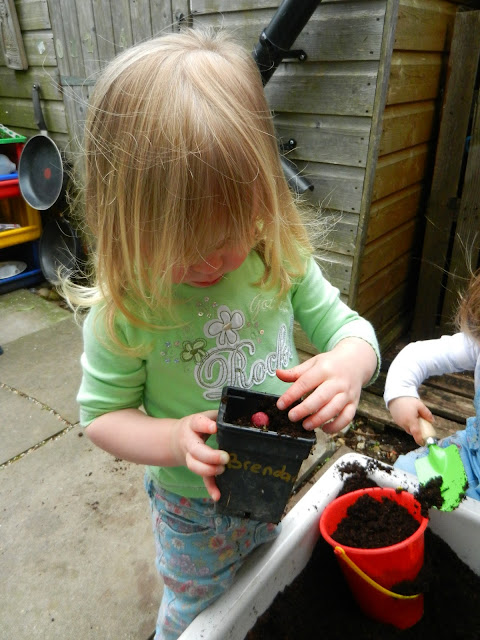 She really surprised me by picking up one of the mini windmills and adding it to her pot, telling me it had grown and was a flower! This caught the attention of the other children and both wanted to look at her new flower and then try it out for themselves. 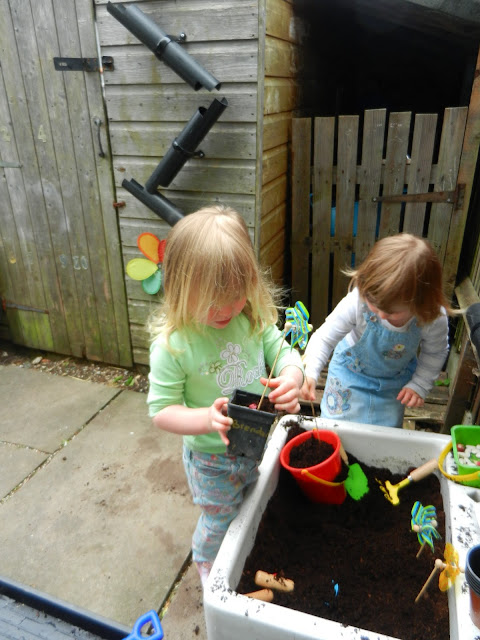 She then emptied out her pot and started the whole process again.
Little “X” came closer and started to dig in the soil, picking it up with his hands, looking at Beans and talking to the girls about what they were doing. 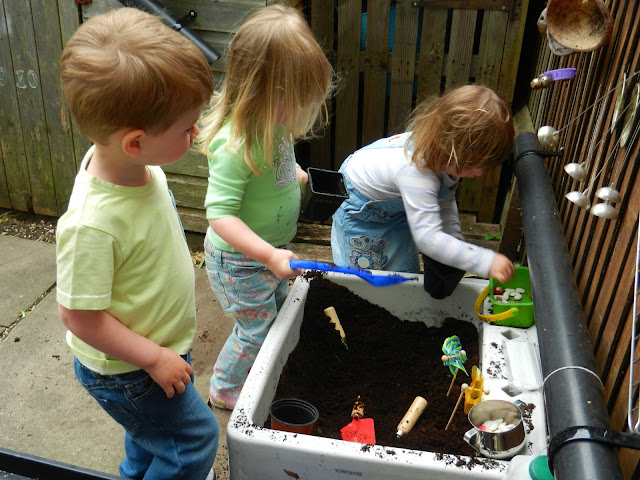 He now felt confident enough, after standing back and watching, to try it out for himself. He filled a bucket and added a Bean. He chatted the whole time about everything he was doing.  It is wonderful to hear his language develop and he seems to be interacting with the other children much more as a result of this. Little “X” is Bilingual and was much more confident in speaking Spanish than English, but in the last month or so his English has really taken a leap and I love listening to him sharing his thoughts. 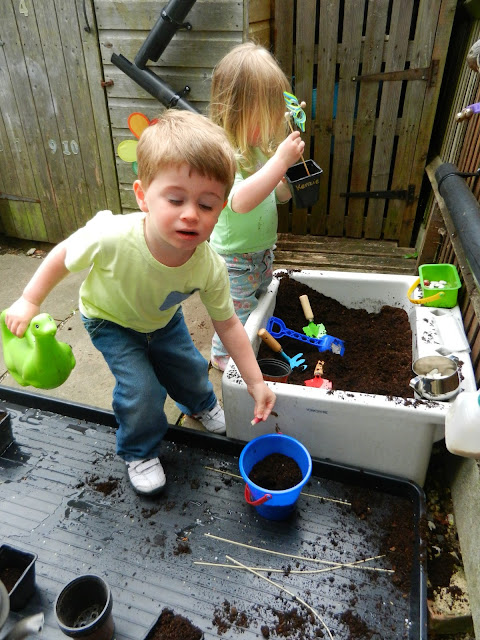 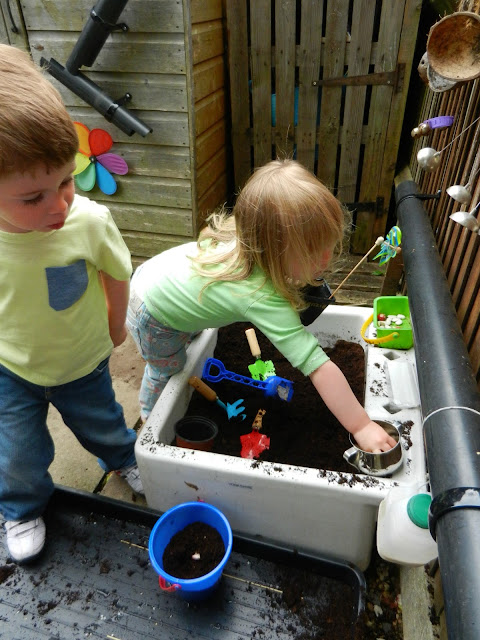 He was very pleased to show everyone he had planted a Bean and was not too keen on covering it up.
Little “R” was getting brave now and balancing soil on her spade and carefully walking to her bucket, which she had placed a little bit further away. She walked slowly and carefully saying that she was not going to drop it, before pouring it in to her bucket. 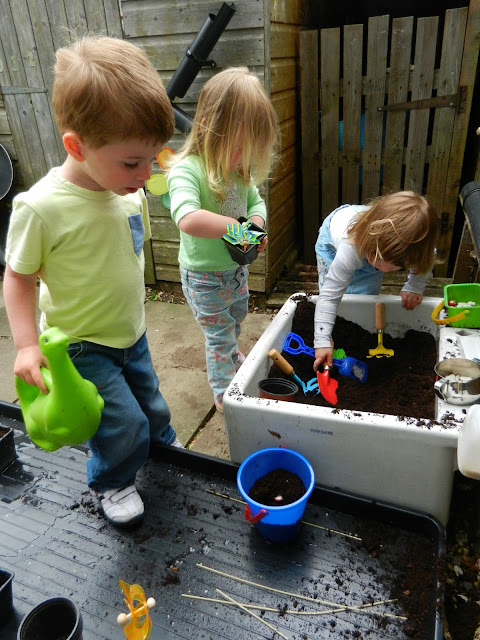 She took a windmill with her to plant as a flower just like Little “L” had a few minutes earlier. 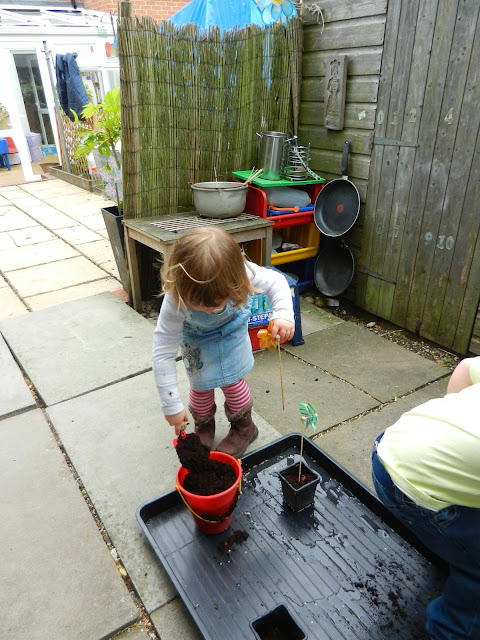 Little “X” watered his Bean…… the only child to remember this part of the story! 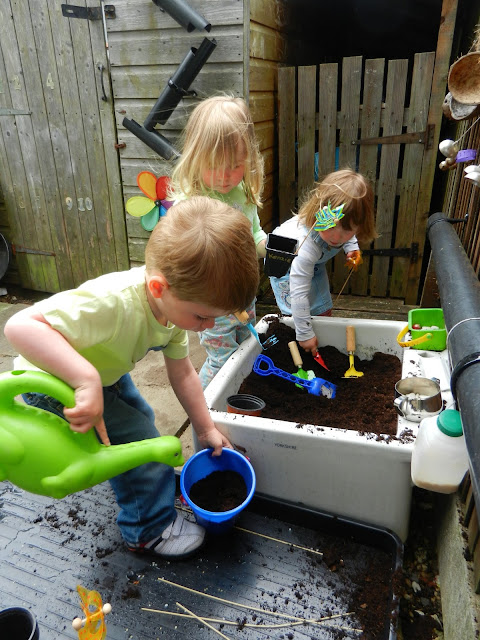 Little “R” decided to add other bits to her plants and picked some mint leaves from the herb box. I have planted herbs near the mud pie kitchen so that there are lots of plants that children can pick and add to their creations and potions. I chose herbs as I wanted something that would stimulate the senses. They can taste these and smell them which makes them even more appealing.  We all had a sniff! 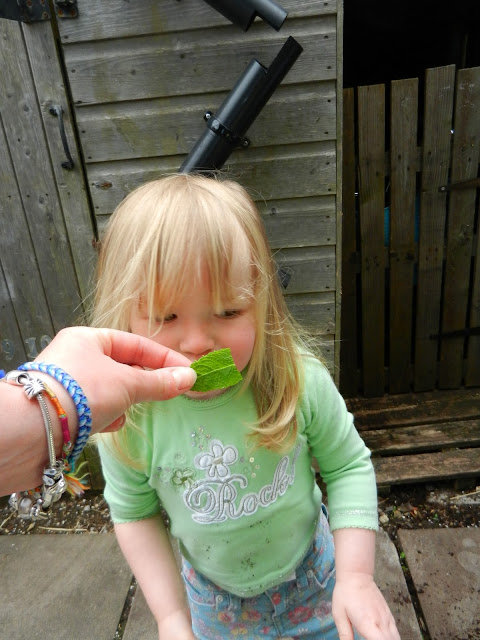 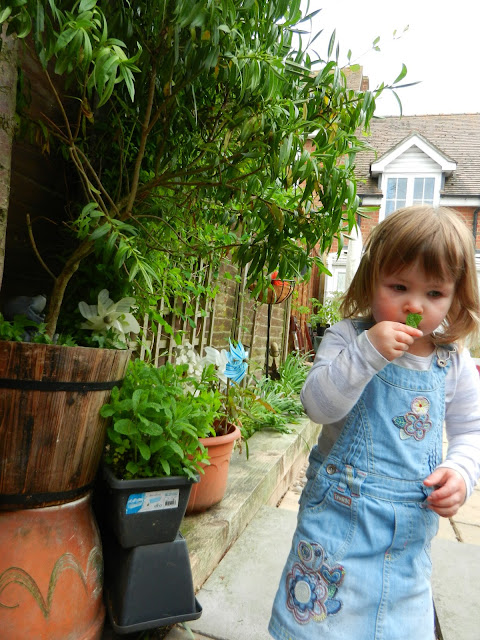 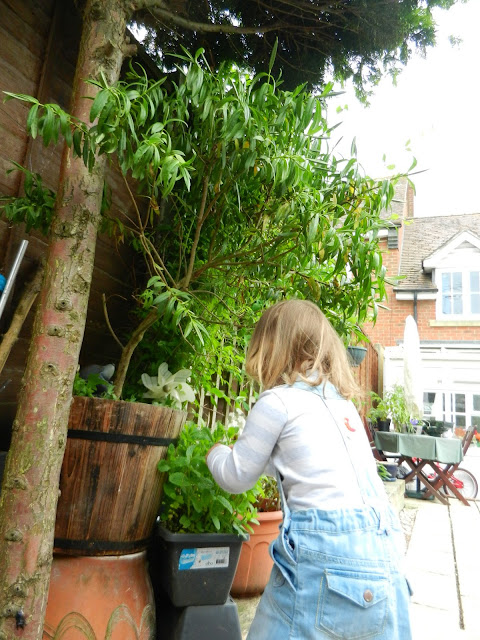 Little “X” decided to improve his chances of growing something by adding all the Beans to his pot! 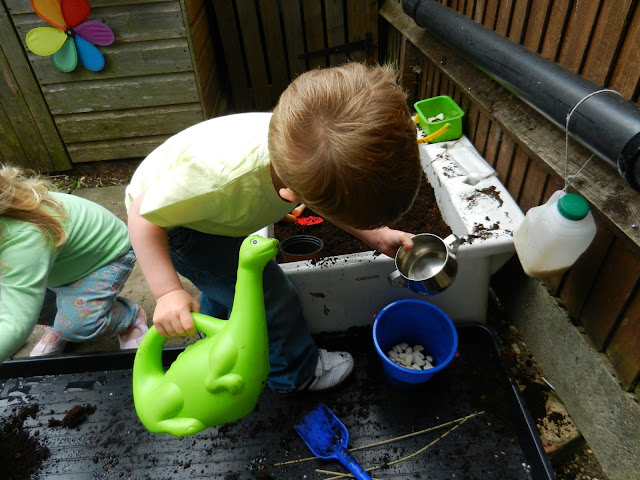 After a good 45 minutes of play we suddenly realised our hands were dirty! 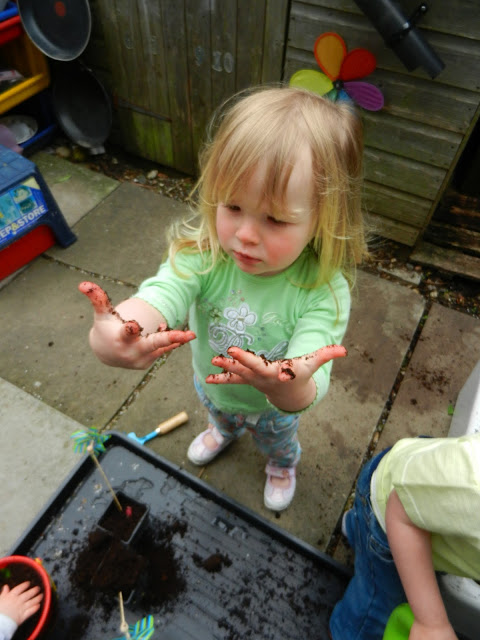 Before we all went in for lunch, Little “X” was fully involved in the play and helping the others with their planting. They were all chatting together and swapping ideas. 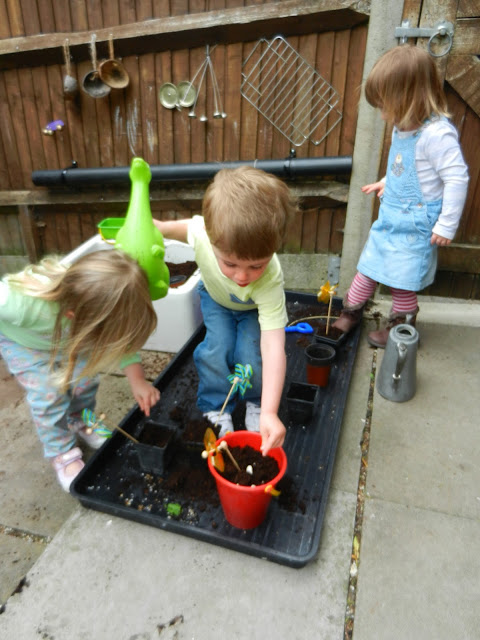 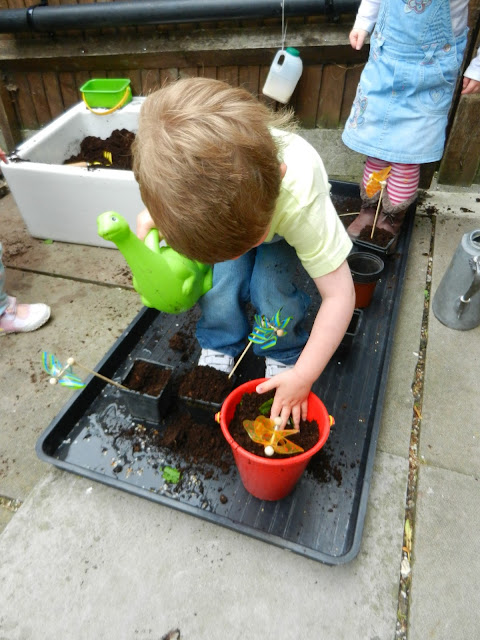 CHARACTERISTICS OF EFFECTIVE LEARNING:
Each of the children showed great involvement in this activity. Even little “X” who initially stood back and watched, very soon became engaged in the play and willing to give it a go. They all used knowledge from the story we had read and the initial “Beans in a jar” activity, and transferred it to this one. Remembering what they had learnt and reinforcing it by practising  the process over and over again in a more hands on way.
Each child wanted to share what they were doing, showing the others the Bean in the pot or the windmill growing! Sharing their achievements and ideas. They worked things out for themselves and used items to represent other items. Making links with past play or learning and bringing that to the current activity.