I don’t watch much tv or many movies. We do tend to watch the Marvel movies though.
I have found the last few to be very much focused on the action and lots of slow mo or sped up fight scenes which have left me feeling a bit motion sick at the cinema and end up looking quite blurred.

One movie seems to stand out though and that is the new “Spiderman Homecoming”. I watched it twice and enjoyed it just as much the second time round.
The Spiderman character seems more true to his comic book version and the humour is endless. He is less intense than the past Peter Parker’s and seems to have really had fun with the role. The writers have done a great job of portraying his relationship with Tony Stark and as two Characters that seem to have a lot of humour written in to their scripts, they bounce off each other brilliantly! Add Mr Happy to the mix and it is just perfect! 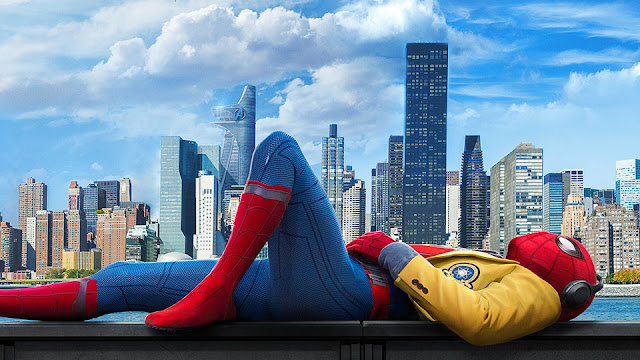 It felt more likely that the Character was a young lad and not a man pretending to be a lad. His best mate and him working together to beat the bad guys while still building their Lego Deathstar!

Many scenes stick in my mind as my personal most enjoyable moments. The first is when the “Training wheels” protocol has been disabled from his suit and he has no idea how to control his webs. The narrative between him and his suits on-board AI, Karen,  during this scene had me giggling all the way through! Before you know it he is talking life and love with Karen while looked in a Damage control warehouse for the night. A lovely nod to the Tony Stark and Jarvis scenes in Ironman.

The other scene is earlier in the film when you see a montage of “The friendly neighbourhood Spiderman” helping out the residents of Queens. Nothing grand and heroic that you would expect from the superheros we have been seeing on our screens.  Depicting him showing a lost traveler directions and saving cats from trees! It is a really lighthearted take on heroism!

Later on his interrogation skills show just how bad he is at this “superhero” stuff and reminds you how old his character is meant to be. His Enhanced Interrogation mode leaves him fumbling and his suspect seems to guide him through the correct way to extract information!

This movie is up there with Ant man  if you ask me! Entertaining from start to finish and no motion sickness and matrix style slow mo’s!