Little “E” has not shown very much interest in writing his name or making any marks that represent writing until the past week or so. Mummy would like him to be able to write his name when he starts school in September and he can now sound out the letters of his name phonetically and makes marks on the paper as he says them.

I have used chalks on the pavement with him, paintbrushes and water in the garden, sticks in the bark chips at the park, all big physical and playful ways to help him learn to write his name but he has not been very keen. He just keeps telling me he “likes Dinosaurs!”

So I tried to find some Dinosaur themed writing activities to do with him. I am not really one for work sheets, but I thought it was something I hadn’t tried with him yet, so why not give it a go, the old fashioned way!

And what do you know? He traced over his name and all the other letters……. and enjoyed it! 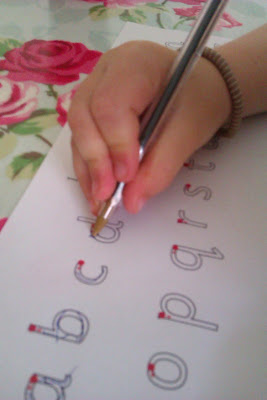 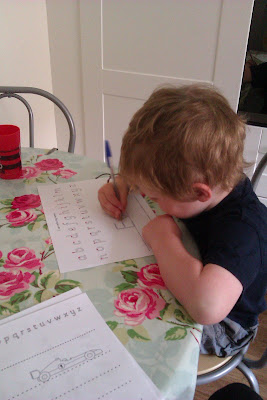 Then we did some work on working left to right. he liked making the roads for the race cars. 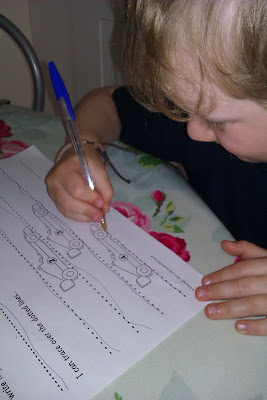 I said we needed the roads to be as strait as he could get them as race cars don’t like bumps…. this made him giggle and suddenly the roads became rather lumpy.
We also did some work on his numbers while he was so keen. I found this cute dinosaur counting sheet online and he did a great job of counting each type, and told me what each type was!  I wrote the number in the box for him and he copied over the top! 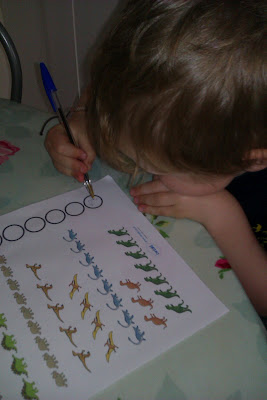 We will still try the chalks and water painting on the patio but I think he just likes to do it the old fashioned way.

5 FOODS I HATE GIVING BABIES……. BECAUSE I HATE CLEARING IT UP!