Now if that’s not a catchy title, I don’t know what is!
Today the sun was shining and the children came out of school ready to explore our new garden set up! Kenzie first rolled out the logs in to a long line from the wigwam to the step. He informed everyone that the floor was Lava and you had to stay off or you would get burnt! 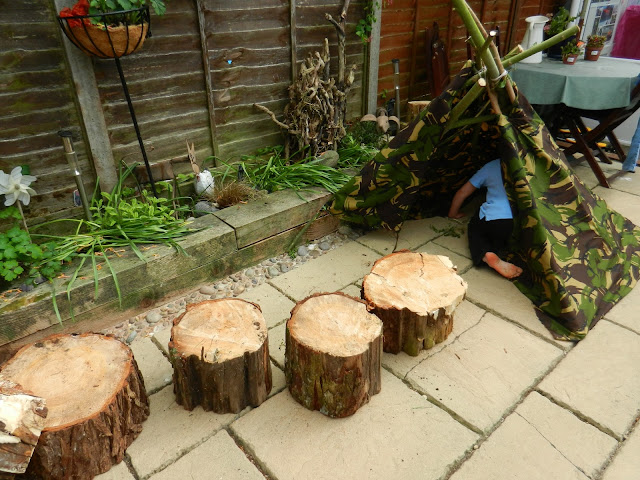 We had to jump to safety and the Lava was VERY hot and dangerous! 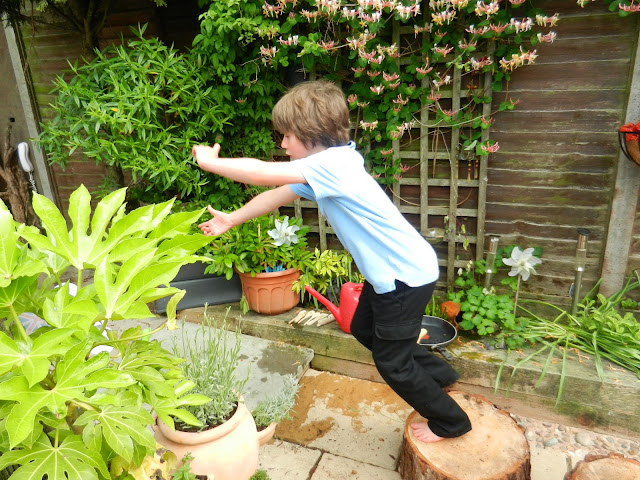 Back on the mainland the cavemen and woman were preparing a BBQ for their relatives and they used the outside phone to call them up and invite them all over. Apparently they requested their favourite meal of Snake poo stew! I did show the children the mint and chives which they could add to their stew and have a taste of the herbs too if they wanted! 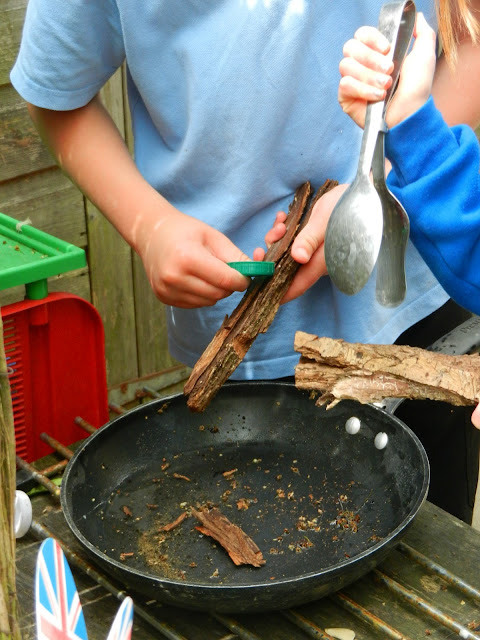 Kenzie made a potion to pour on the floor to make the lava recede a little bit so that he could stand and make some mint soup! 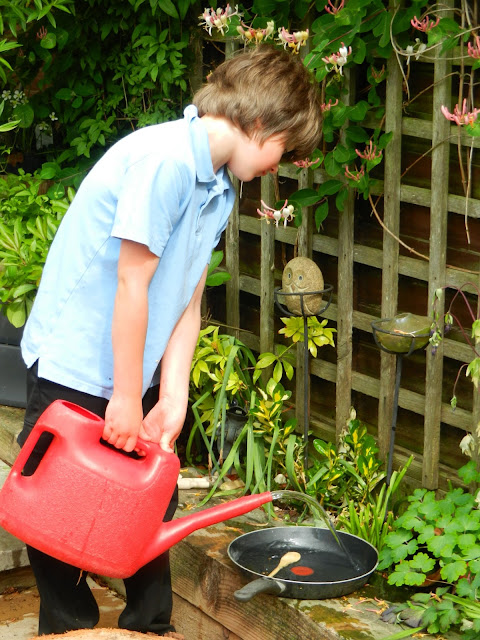 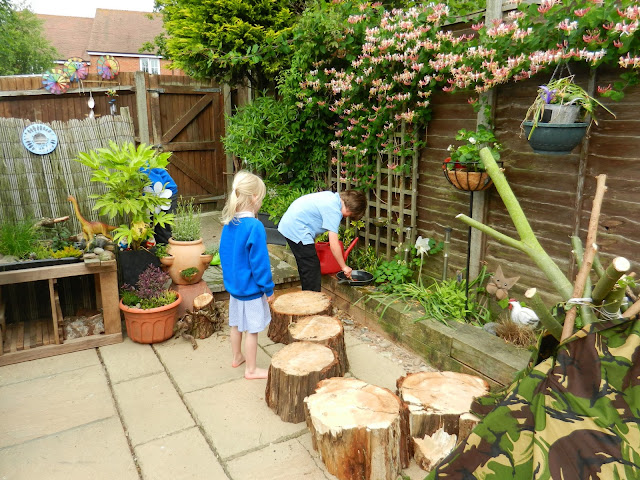 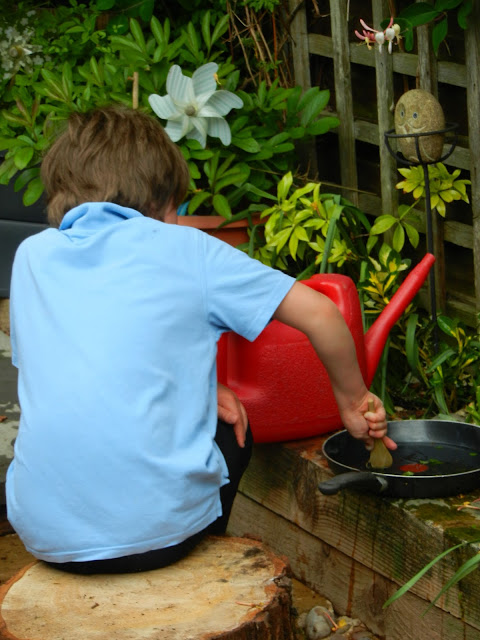 Little “E” popped back and forth along the logs from the mainland to the island with the wigwam!
Practising her balancing as she went. 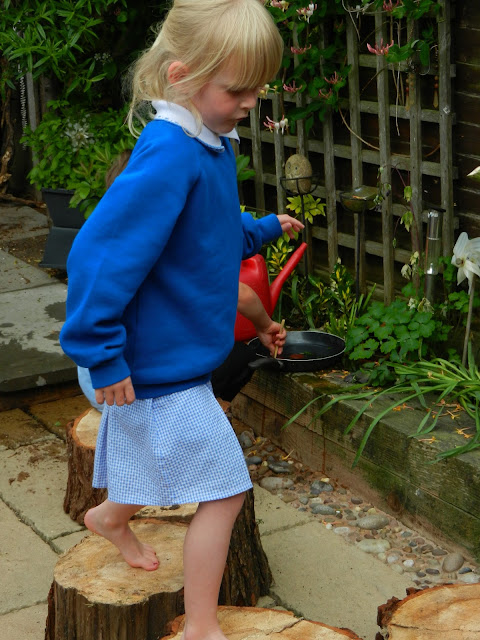 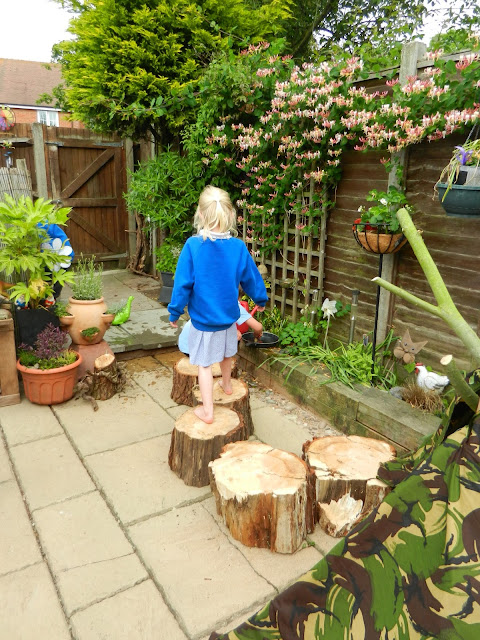 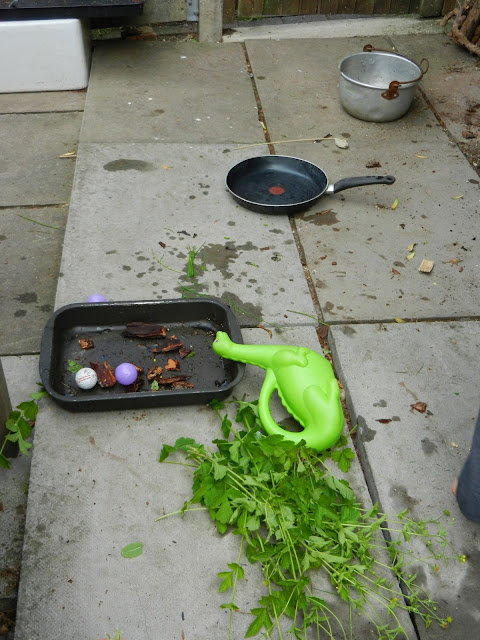 Till I came out with tuna pasta salad and everyone then decided that was probably a better meal for cavemen and woman! 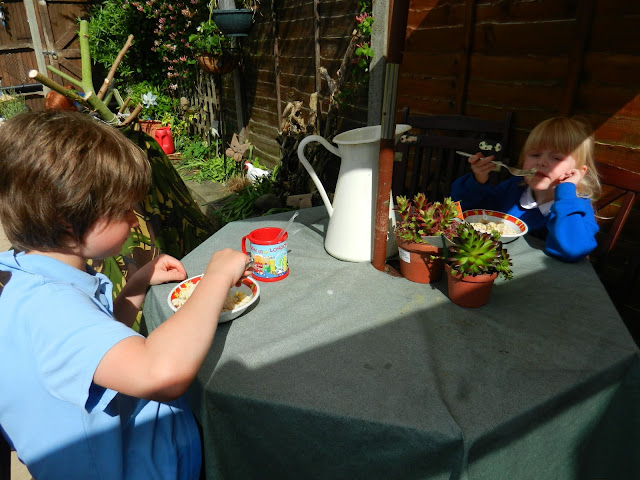 Potions were created and bottled! 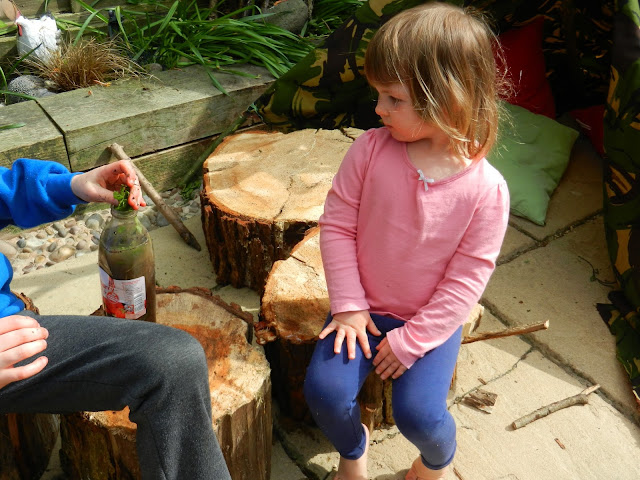 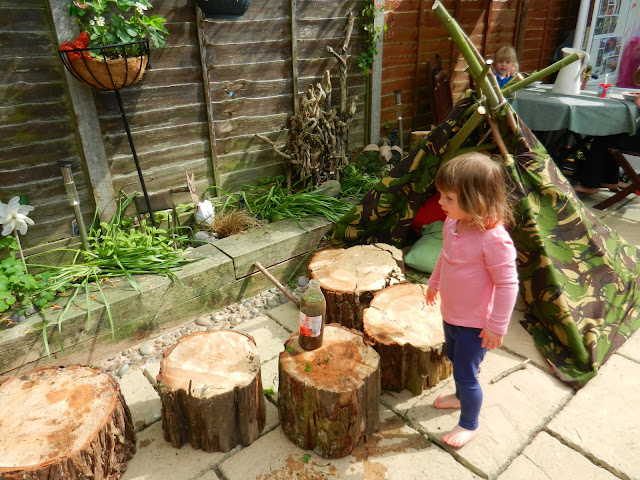 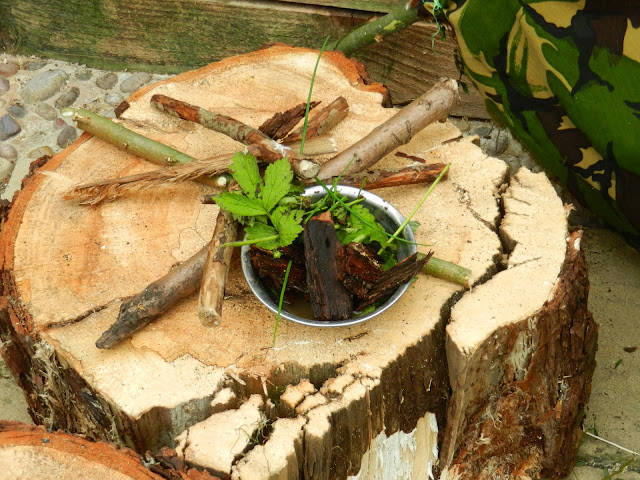 Feet were washed! This was a magic anti lava potion. 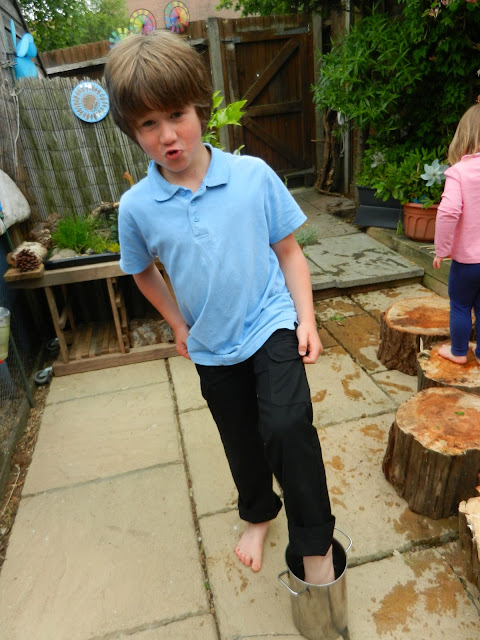 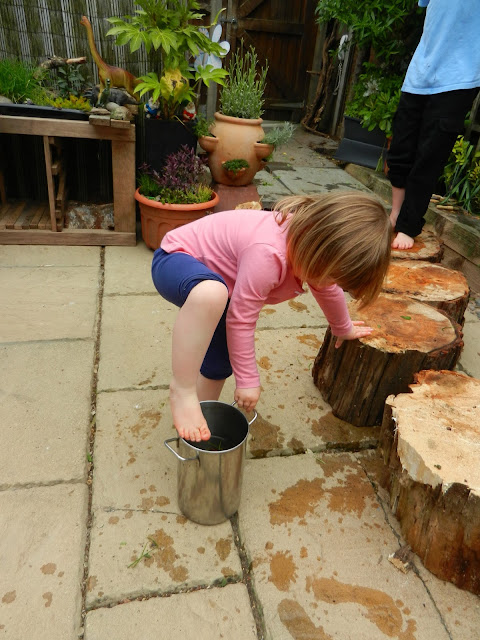 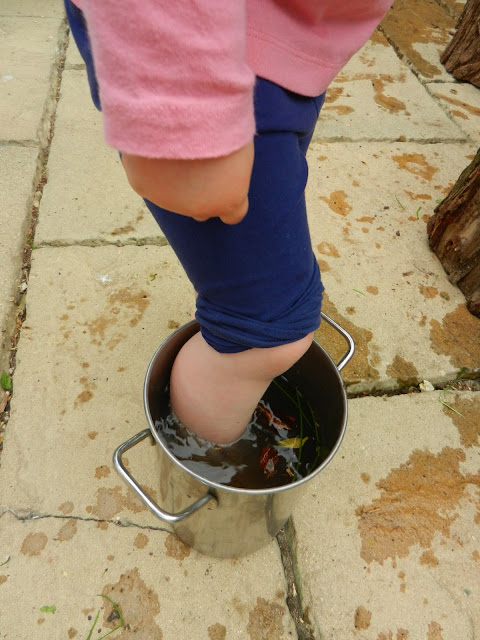 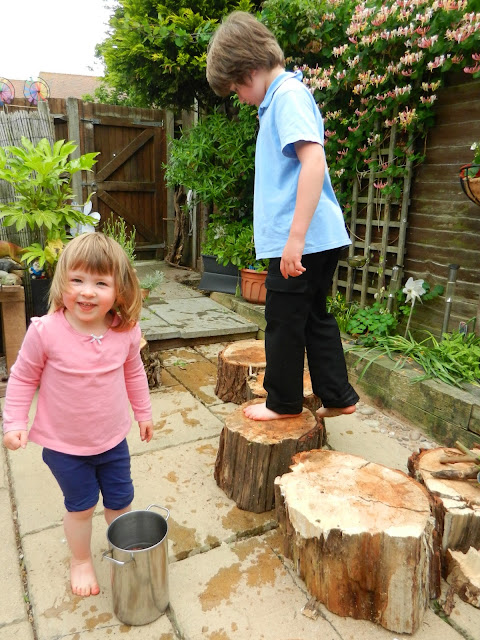 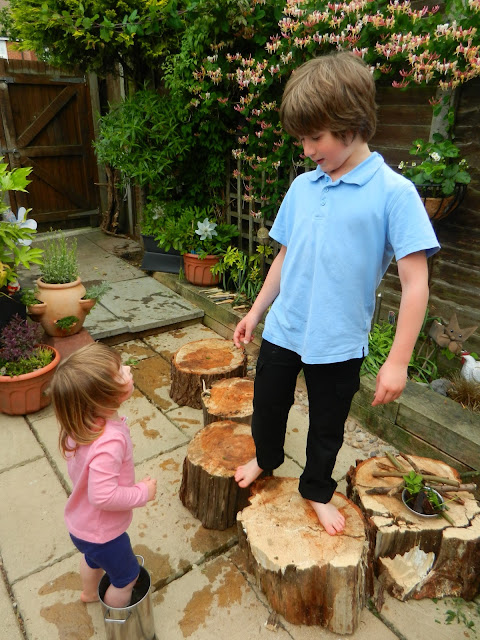 Do you think she might be feeling a bit peckish? 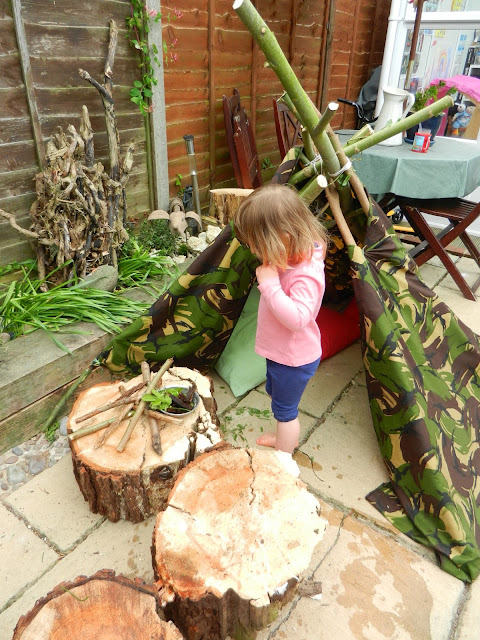 CHARACTERISTICS OF EFFECTIVE LEARNING:This was a lovely play session to observe. The children’s imaginations were on overdrive and there was so much for them to explore and experiment with. After showing them which plants in the garden were edible and also had the bonus of smelling nice, they used all their senses to explore the world around them. They all took on a role in their imaginative play and  talked about what they wanted to be. They shared their ideas and thought about ways to do things for themselves. How could they get across the Lava? Problem solving and pretending that objects are other things so that they fit in to the game. They all played for well over an hour with such focus and energy.