This week I introduced some A4 Acrylic mirrors in to our play. Mirrors are a fantastic way of extending a child’s exploration and discovery in play. They catch and reflect light, open up a space, introduce the idea of symmetry and are a great way for very young children and babies to explore facial expressions, interaction and encourage social development. When used with very young babies you can help them to focus better and track objects by using mirrors in their environment.
Little “T” found the mirror in the back of our emotions book fascinating. He poked at his reflection with his fingers and  babbled at the child looking back at him. He bent down closer to the mirror and watched the baby in the mirror get closer to him. 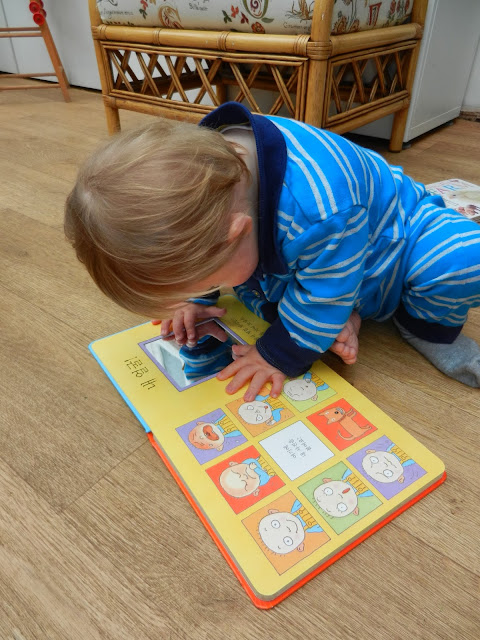 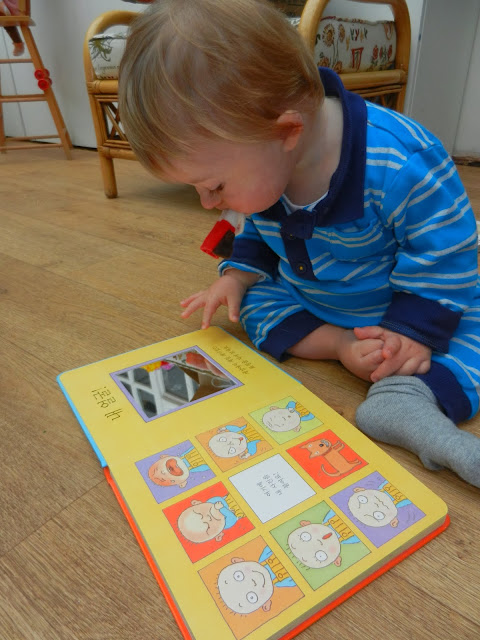 Little “L” loves the mirrors too! She bent over one and watched her hair fall forwards. She told me she had Princess hair! The reflection made her giggle lots! 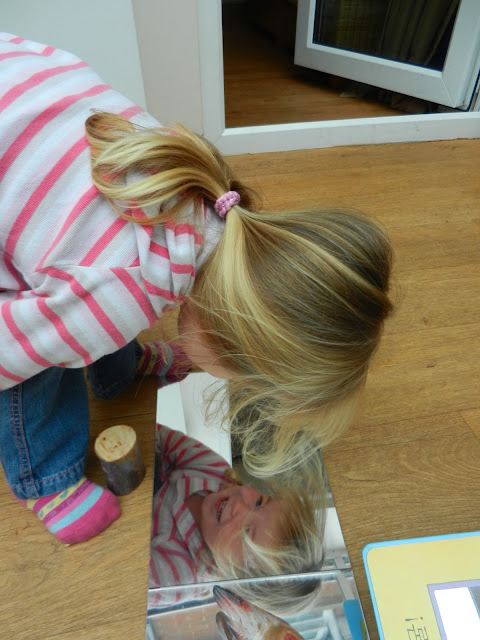 She started to add toys to the mirror, noticing how she could now see under the horses chin. She added her current favourites, exploring these familiar toys in a whole new way! 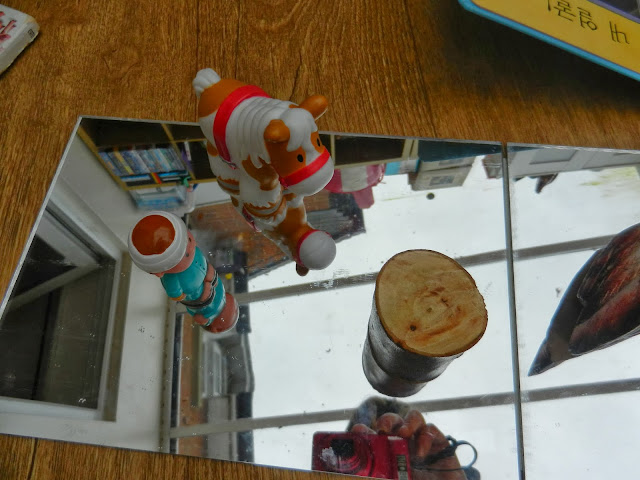 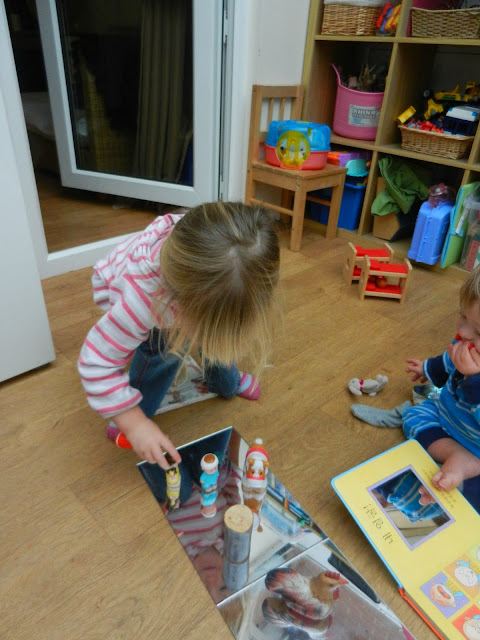 Little “T” joined her to get a look in the bigger mirror. In this picture he is trying to eat our Father Christmas finger puppet! 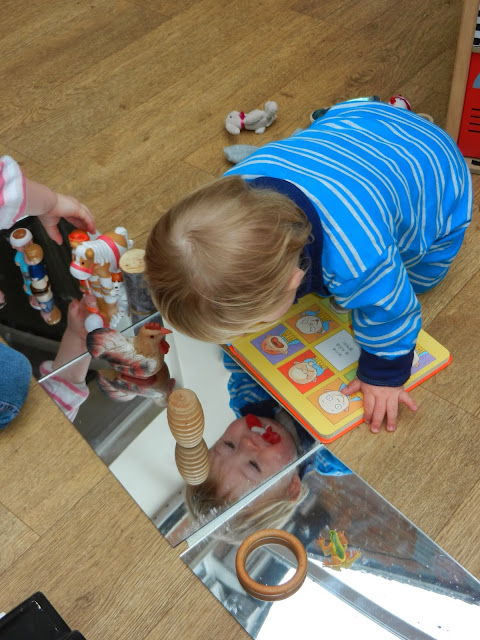 Little “L” continued to explore more and more using her body to create the image being reflected back. Changing her position, making funny faces, getting closer or moving back a bit. Giggling lots! 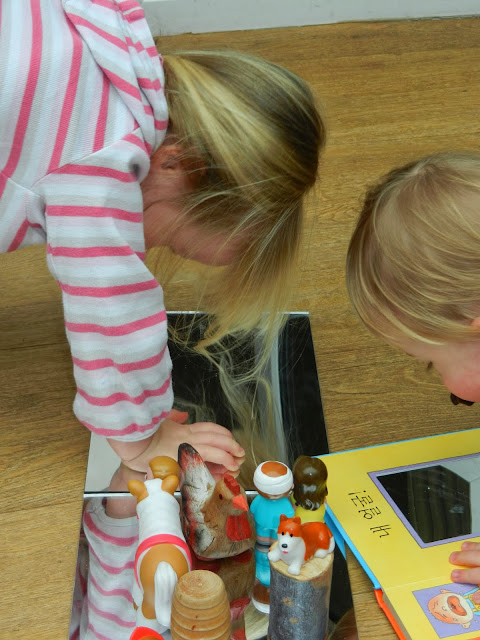 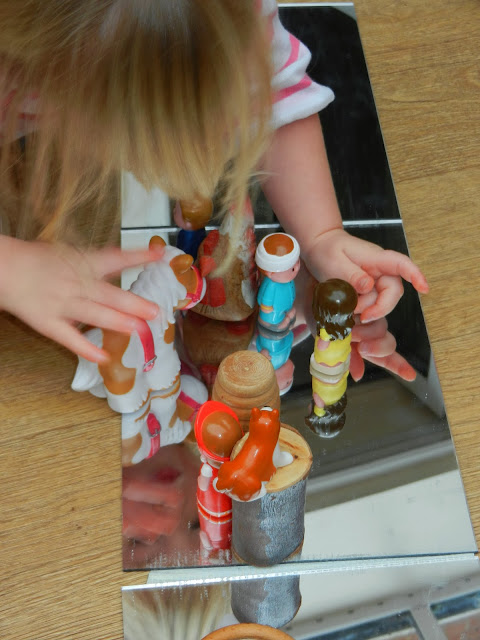 Little “T” would sit back and look at the mirror. From his sitting position he could no longer see the baby in the mirror…… but if he lent forwards and looked down… there he was! 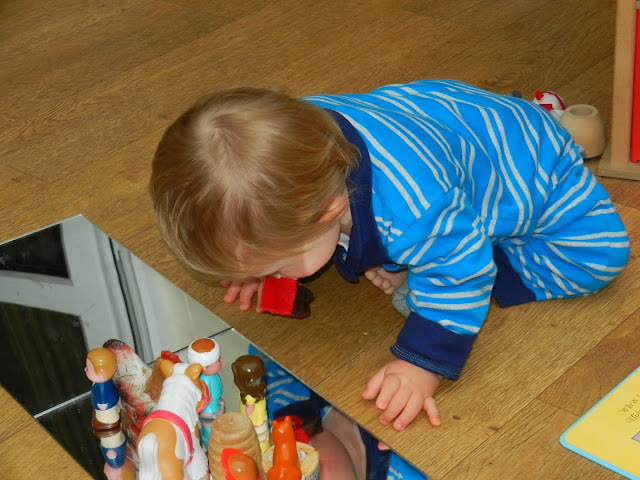 At one point he lay down on the mirror and started to look at the toys reflected next to him and the sky above through the conservatory roof. 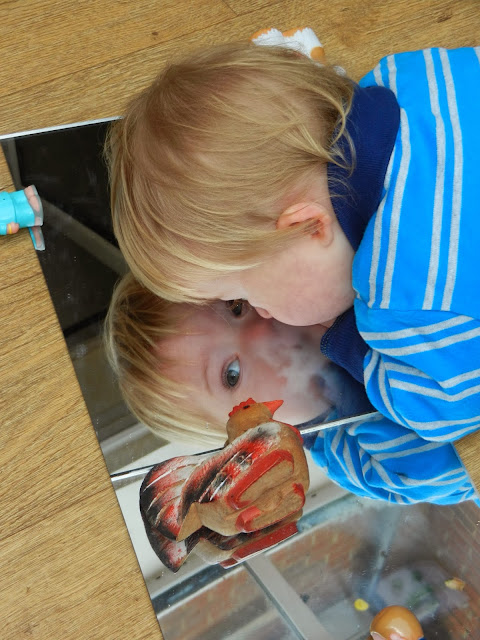 Little “T” engaged and interacted with the baby in the mirror. I doubt that he realised the baby was him as the  self awareness milestone does not develop until around 18 months. Little “T” is 16 months. But it didn’t matter at all. He was being social and developing the skills that he will use as he grows up and then in his life beyond, to interact with others around him. Smiling at the baby who smiles back at him and waving at him. Babies are naturally drawn to faces. They will spend much longer looking in to your face and responding to your expressions and sounds than they will any toy that you might offer them.

CHARACTERISTICS OF EFFECTIVE LEARNING:
Little “T”  spent a long time interacting with the baby in the mirror! He did not realise that his motivation was actually himself and even after moving away for a short time, he would always come back to see if the baby was still there. He was greeted with a smile every time! He used all his social skills by babbling, smiling, touching and responding to the reflection.
Little “L” was very aware that this was a reflection of herself. This was clear from the way she behaved in the mirror. making her body in to funny shapes and watching herself. I think she was aware of how it felt to be in the shapes and positions she was in but she had no idea how that looked to others. Her comment about having Princess hair showed that she was fully aware that she was seeing her own reflection. I love how she explored and experimented with well known toys and talked about things she was now seeing for the first time. The top of the horse and his chin as well. She used words like “the same” and “reflection”. She was introduced to symmetry on a simple level. She started to see things in very new and different ways, exploring the idea that she could see the sky when looking at the floor! That she could hold her hand or foot over the mirror and see the bottom of it as well as the top! She made links and thought critically about what she was seeing, testing her ideas by doing different things over the mirrors and placing different toys on them.
Today’s play, meets the following EYFS Prime and specific areas