This week we started our Halloween activities and joined in with a party at the village Pre-School!

I started off the week by having the playroom Halloweenified! The transfers on the wall, we still had up from last Halloween. They came from the £1 shop so we have had our moneys worth out of them! The boys and I blew up all the inflatable decorations and set out our bottles of potions that we made last year. 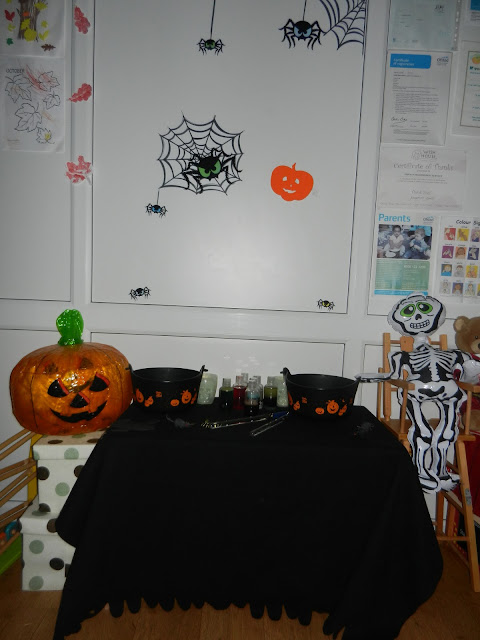 I also set up the knitted toys and some other bits on a shelf in the playroom. I wanted to see how the children would use these items and how they might get incorporated in to their play. We also put the Jar lanters we made last year, on the window sill. 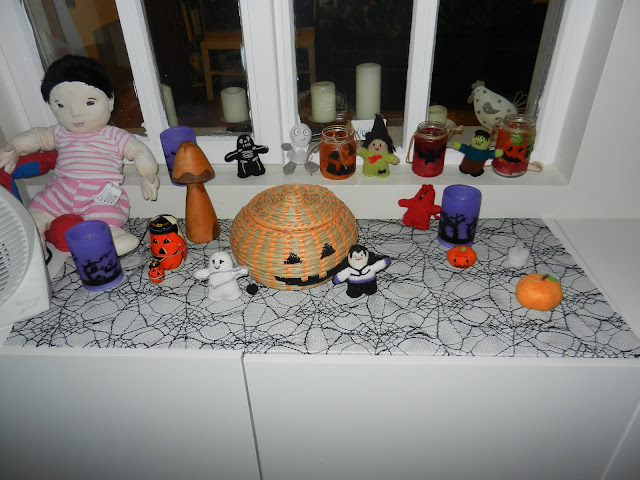 We put together a sensory tray. I used mung beans and lentils as the base and then added some Halloween confetti  rats, spiders, knitted toys and orange ping pong balls! There were some Halloween rings in there, hidden to find, as well! 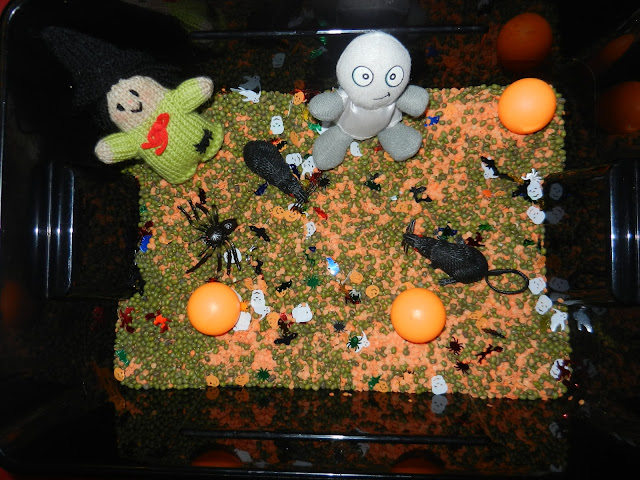 We also have Halloween doodle books with picture ideas to add bits too. I photocopied and printed out a few for the children to draw on. 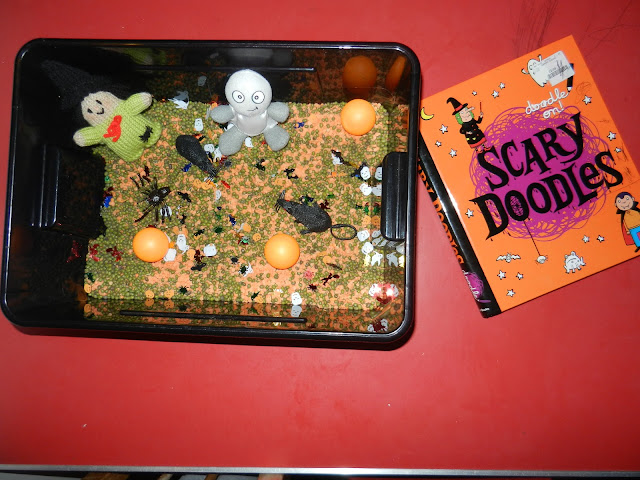 We have a bucket of Halloween dressing up clothes out as well.  Little “R” has taken a real liking to the Ghost costume. Another goodie from the £1 shop! 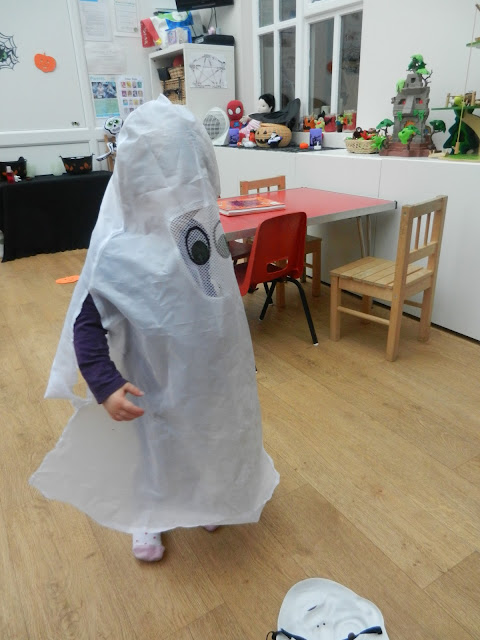 A Ghost who knows how to accessories! 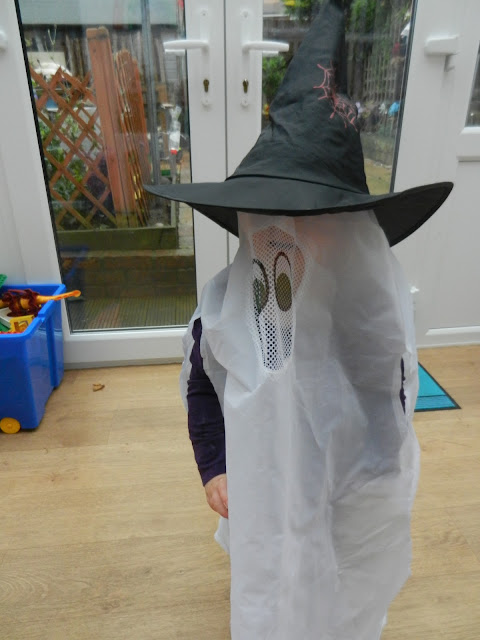 We had fake candles as well with rubber batter operated flames. The girls both  tried to light one candle by holding the other over the glowing flame. They must have seen this technique used when candles have been lit at home. Very likely as we get a lot of power cuts in this village! They were so careful as well and touched the pretend flames and said “ohhh hot!” 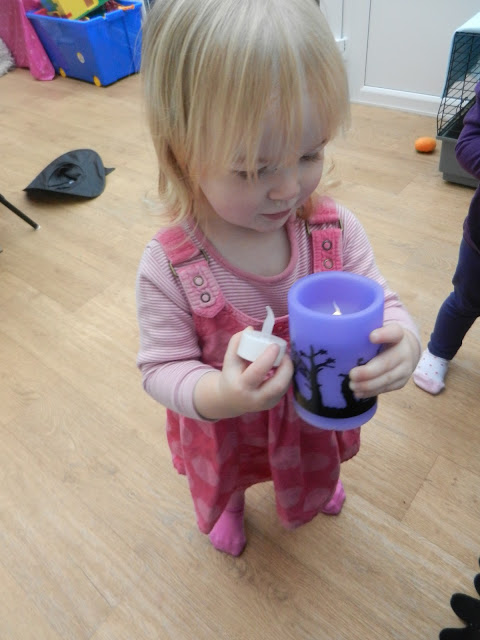 The Potion station was a big hit this week! The bottles lids are securely glued on so they could not actually get the liquid out. They enjoyed shaking them and watching the different things inside move about. One was a black liquid with rice in and when you shake it you see the rice come to the front of the bottle. Some have an oily mixture in, that moves slower than the water!
The girls love to add things to their cauldrons and then use the magic wands to mix it all up! 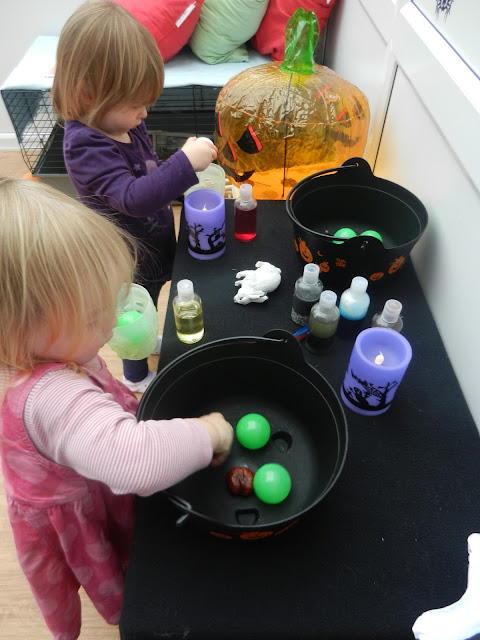 We played with the inflatables! 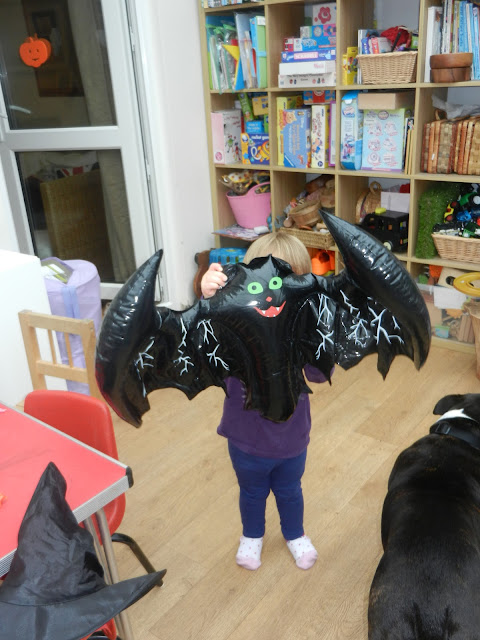 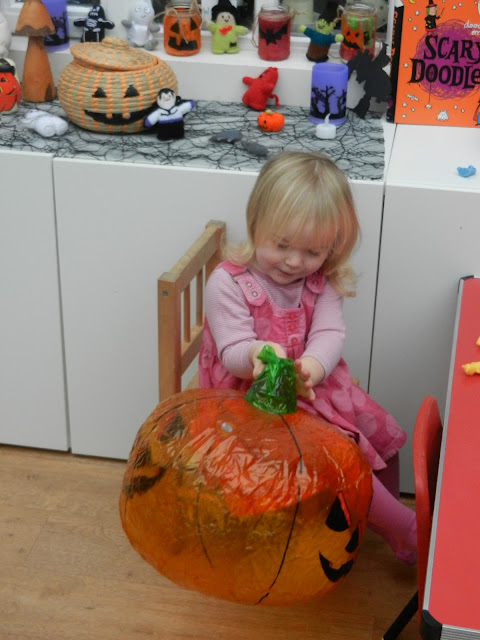 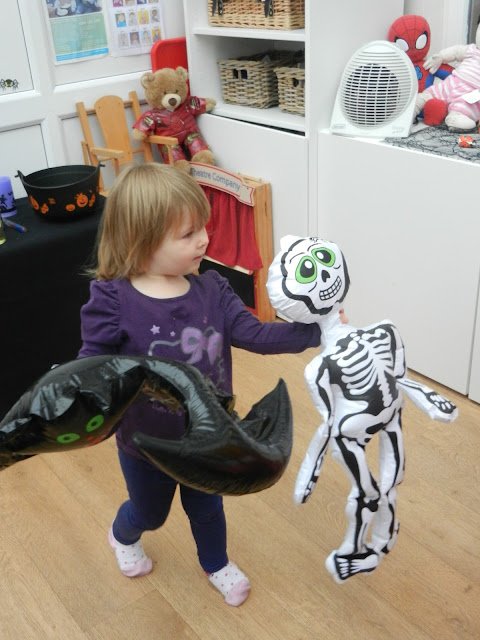 The sensory tray has been a big hit. We added a few Halloween plastic cups, spoons and some green ping pong balls as well. The girls also added the pumpkin stacking toy to the tray! 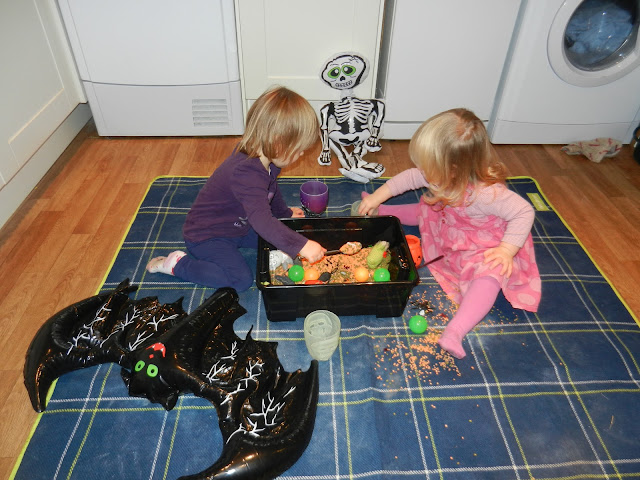 We spent a lovely hour, scooping and filling and then pouring it all back out again. 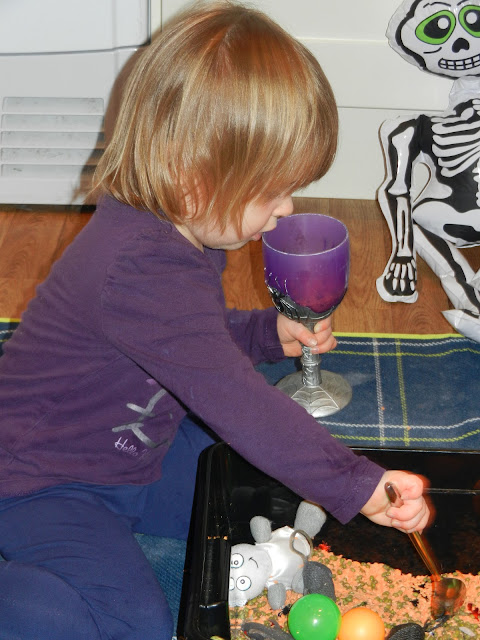 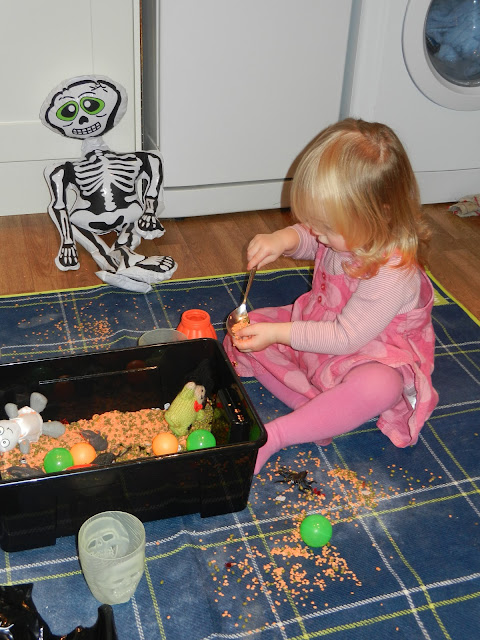 Little “L” enjoyed a bit of dressing up. She is not very keen on doing this but had been watching Little”R” enjoying it and I think curiosity got the better of her! 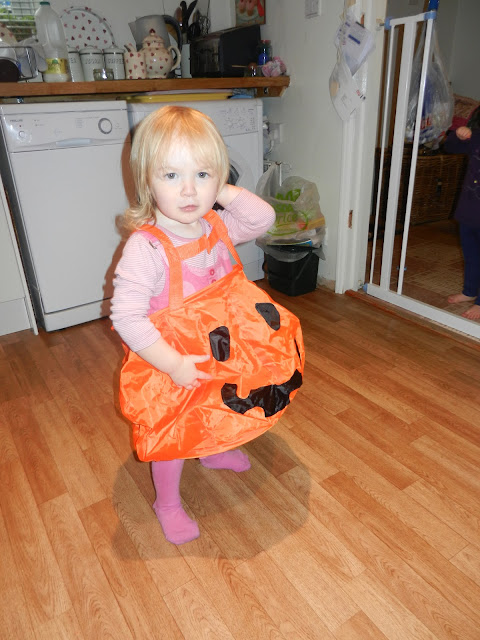 After the school run we worked on our Doodle pictures. The children all chose one to work on and I read out the guidance on the top of the sheet!

Little “R” was adding a cat to her picture. I think she actually added lots of cats and asked me to add a cat. She kept saying “Meow” as she was drawing! 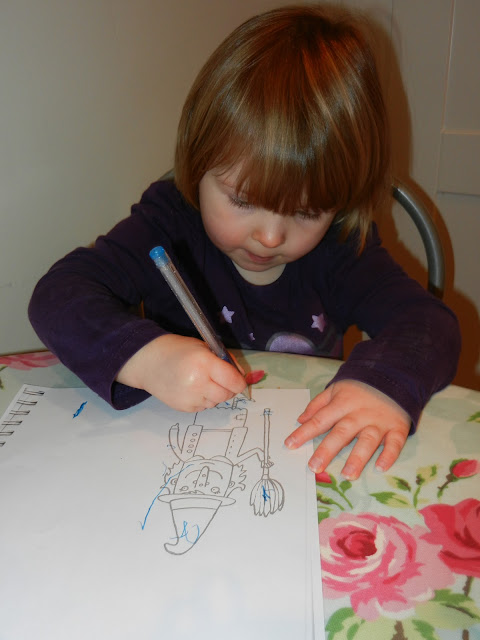 Both Little “E”‘s chose to work on a Dragon doddle! 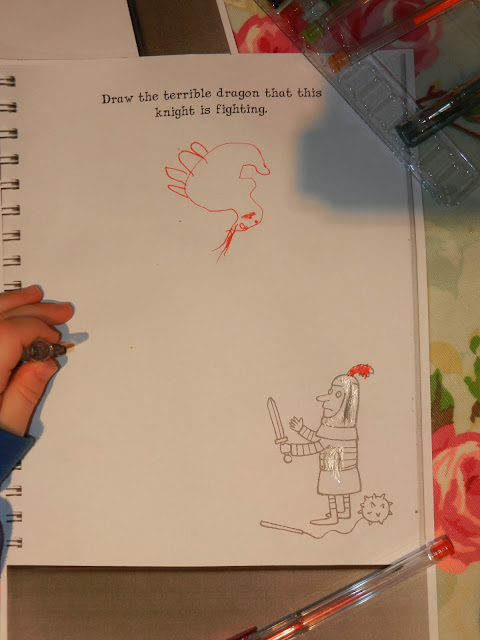 Little “E” was very keen to work on Dragons and he drew 2 on his page. He added red hot fire as well.
I love how carefully he coloured his Knight! 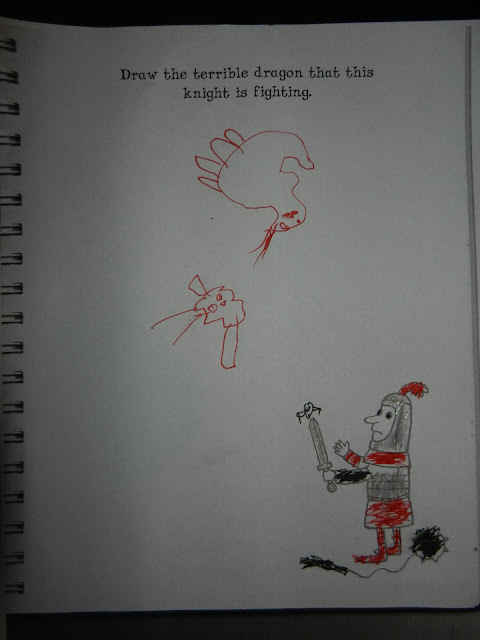 Little “E” worked very hard on her’s too. She added a big Dragon and a long Dragon. She talked about how they breath fire and how one had a long tail! 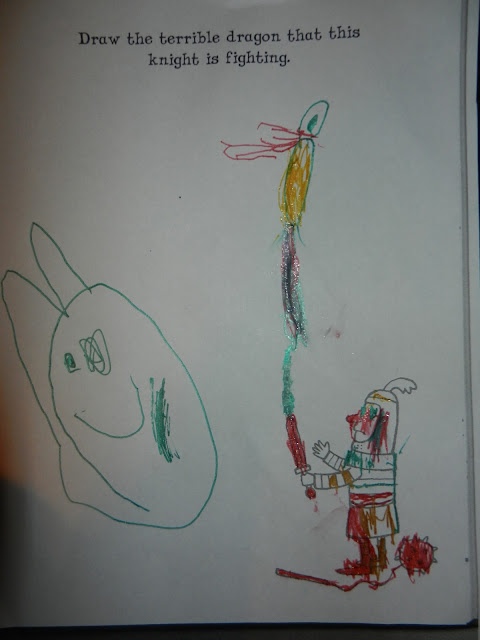 Here is Little “R”‘s finished picture! She works very hard on drawing intricate marks and tells me about each one as she draws them. She really is starting to understand that marks can carry meaning and her pen control is amazing for her age. 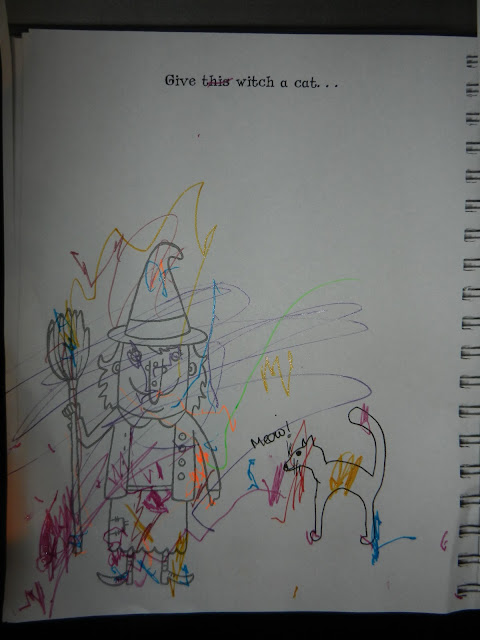 Little “L” spent much of her time adding large areas of colour to her picture and building up different colours over the top. She practiced taking the gel pen lids off and then putting them back on again. Wonderful hand eye co-ordination and fine motor skill practice! 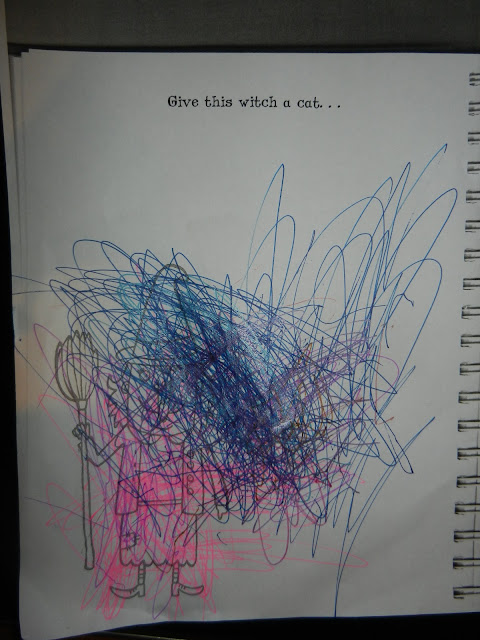 This morning we joined in with a Halloween party at the village Pre-School. We had some yummy hot slugs with blood sauce (hotdogs with ketchup!) and some crisps, fruit cakes and crackers! 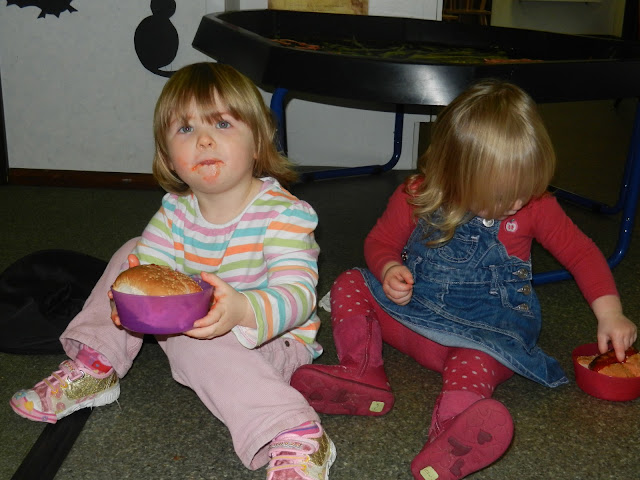 We made potions to drink! 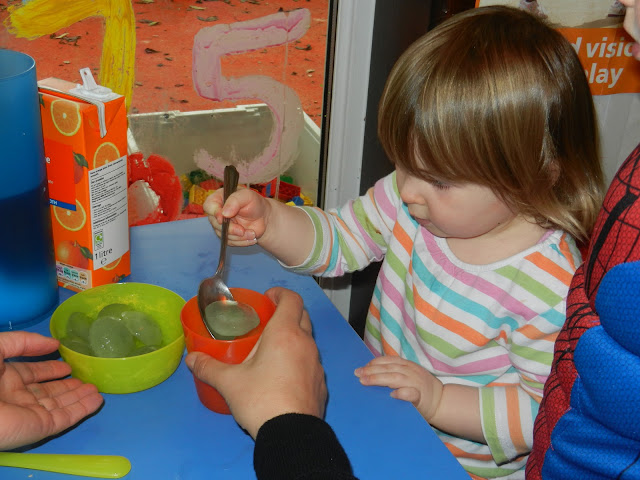 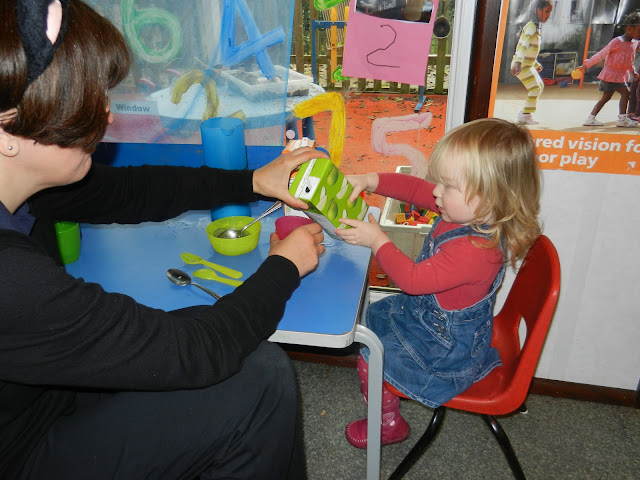 We did lots of dancing to Monster mash and the children showed us their Skeleton dance! Played musical statues and bumps! Did some Apple bobbing and coloured Halloween pictures!

We have lots of ideas for next weeks and it’s half term as well so everyone will be home! This means we can have lots of fun together!

DRAWING, STICKERS AND A NEWBIE!

USING MAGNIFYING GLASSES TO GET A CLOSER LOOK AT NATURE.