Today little R took her interest in writing to the next stage. She often asks me to write her name so that she can go over it herself. Today though she started to write letters with no help at all. She also recognised some of the letters she wrote.

Some of these letters are relevent to her name or the names of her friends. Some of them are just easy to write.

She was so proud of her self and worked hard to correctly form the letters.  If she got stuck then she would look at me for help. I did not interfere until she asked for support and then I tried very hard to guide her while not taking over or doing it for her.

In the EYFS Early years outcomes, under  literacy,  writing,  it states a child should should

● Give meaning to marks they make as they draw, writ e and paint.
● Links sounds to letters, naming and sounding the letter of the alphabet.
● Uses some clearly identifiable letters to communicate meaning, representing some sounds correctly and in sequence.

These are all under age bracket of 40 to 60 months. Little R is 41 months so she is well within expected development range, if not a little ahead of where I would expect her to be.

Little R was very keen to write letters. She was motivated by her own interests and desire to form recognisable letters. She was engaged, focused and concentrating on achieving her goal. She made links between the marks she made and the letters in the names of her friends,  showing them each letter as she wrote it. Even when she found a letter hard  she kept trying and shared her achievments with others. She was proud of herself and felt good with the praise and recognition she achieved from her hard work.

NEXT STEPS- Over the next few weeks I will offer different mark making opportunities so that little R can practice her new skills. I wil offer some playdough with letter cutters and a pencil so thst she can cut out the letters and then draw over them with the pencil. We will also start to use the sandpaper letters to explore letter shapes in a more  sensory way as well as chalk on the patio outside to make large scale letters. 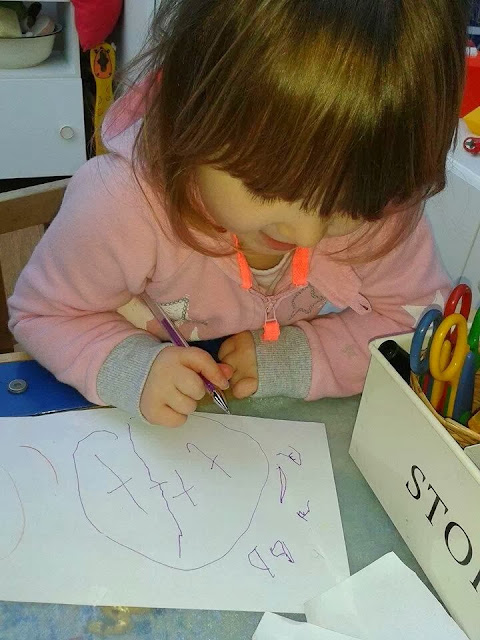 HOW TO MAKE …… A paper plate fish tank!

Getting babies “at one with nature”