It’s a been week today!

I have to say I am feeling very positive about the whole thing. I feel that we have got in to a rhythm of doing other things and that if tv was to be allowed again tomorrow, that they would be happy with an hour a day and the rest of the time they would find fun things to do.

This morning Kenzie woke early and crawled in to bed for a cuddle. This is something I am loving again. a few weeks ago he would sprint down the stairs and I would be woken to the noise of Spongebob 🙁  Now I am getting a lovely cuddle and he is falling asleep again for a little bit as well as sleeping in most days longer than he has before. Not sure if this is connected but I think it is because he doesn’t wake and think “TV” so he doesn’t  jump out of bed so fast.

This morning I came down and made a cup of tea to take back upstairs. I explained to him that it is the weekend and mummy, Daddy and Brendan want a bit of a lay in. I got out some sun catchers to paint and his water colours. Once he was set at his task I went back upstairs to doze. 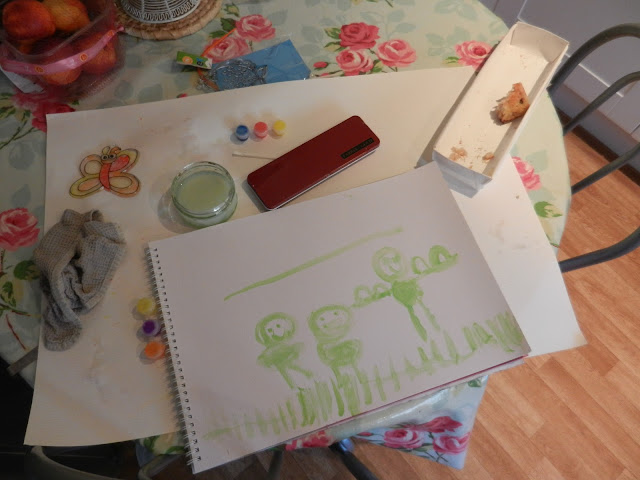 Brendan woke about half an hour later and took his broken stereo downstairs and between the 2 of them they started to dismantle it to see how it all works and what cool bits they could find inside. 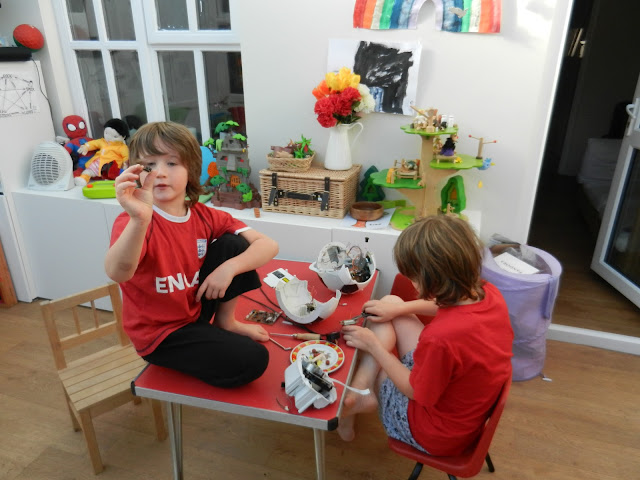 Once they had tired of dismantling, I called them in to the kitchen to come and make some dough for our Michaelmas Bread dragons! 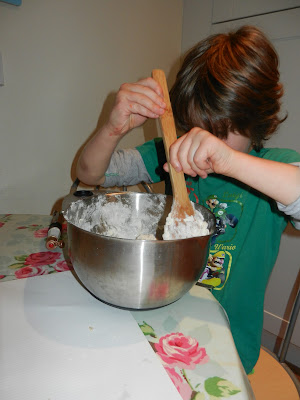 Then we got to the shaping of our Dragons. It has been lovely and flowed naturally in to the boys current interest. Since the new Dragon book arrived last night Brendan has been on a Dragon designing mission. He even dragged Kenzie in to his little world and he got him drawing a dragon too. He sat with him and carefully wrote the statistics down for his and Kenzies Dragons and included Kenzie in the process. Asking him how strong his Dragon should be? how fast? what special attacks did it have? It was lovely. Brendan wrote so much and so neatly as well. Not bad for someone who has only really been writing a year and does not tend to “choose” to write in his spare time! They used their designs to make their bread Dragons! 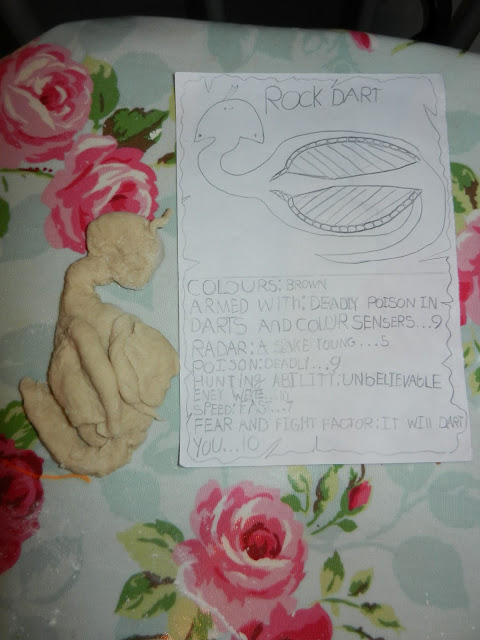 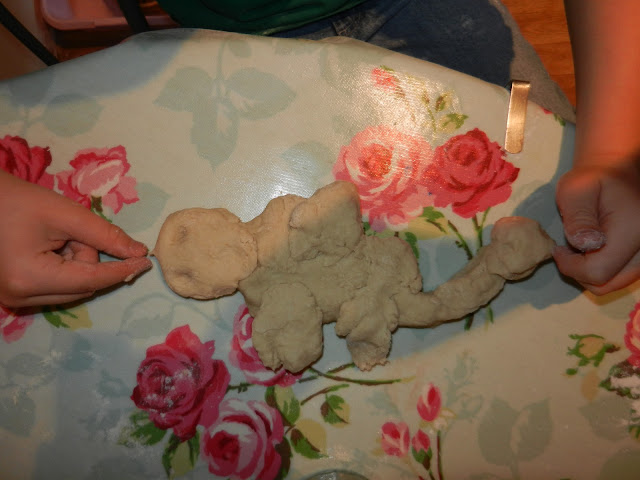 We left them to rise while Kenzie went to a Birthday party and Brendan stayed home with Daddy and he used the insides of his stereo to make ships for his Sklander figures. When Kenzie got home he joined in too! We cooked the bread and it turned out really well! 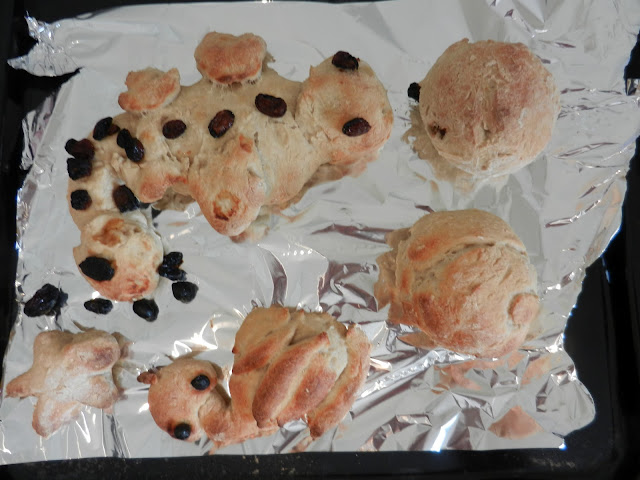 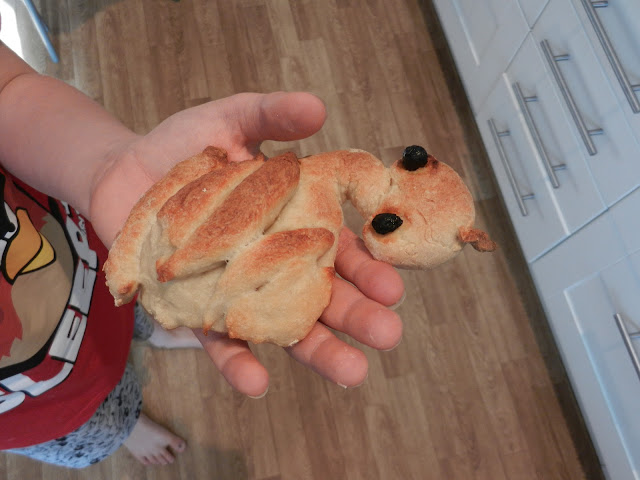 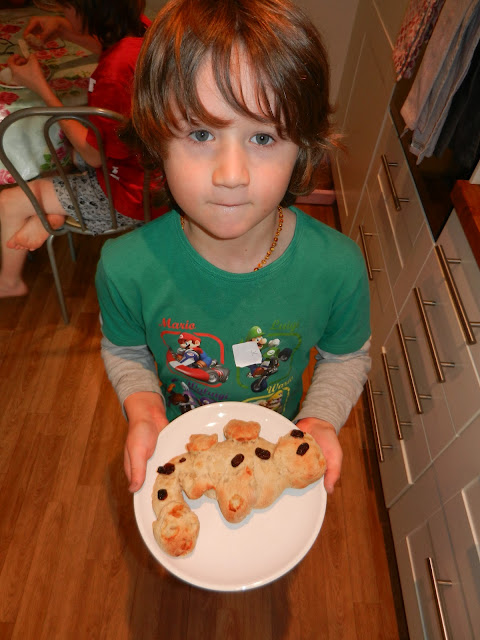 Kenzie ate that whole Dragon in one sitting!!!!

While we waited for Dr Who to come on and the first bit of telly for Kenzie in a week, we finished off the Sklander spaceships and played a few games of “Guess Who?” 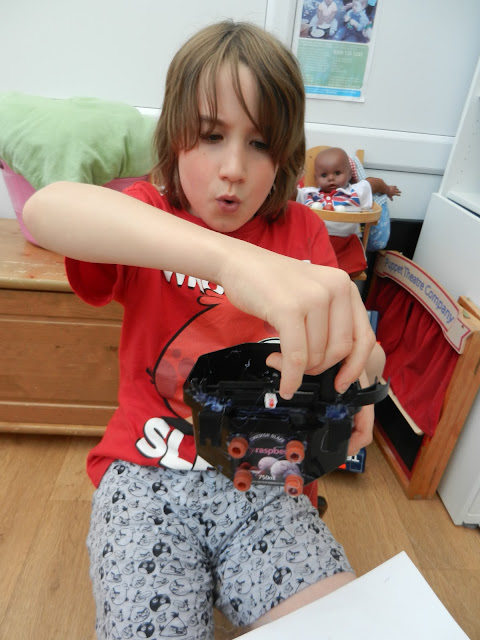 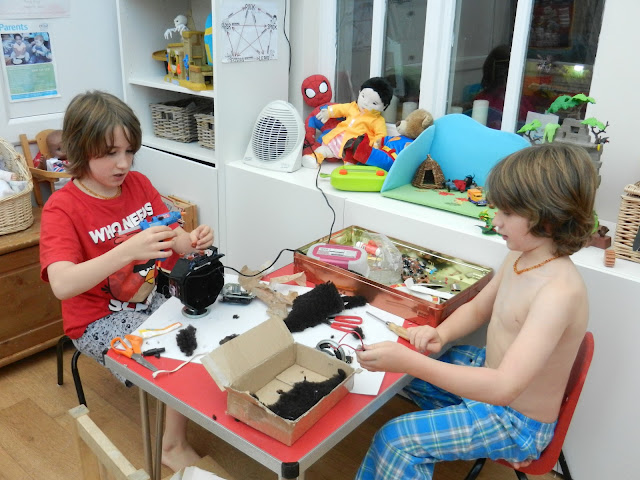 When I look back over this week and see what has changed, how much the boys have played together, how much conversation has been shared and how much natural learning the boys have been doing in the name of “fun”, I know that this change has been for the good. There is still a week left of our challenge and when tv and computers are allowed back, I know it will be much less than it was and with stronger monitoring. I don’t want to go back to hours of mindless cartoons each day, and it will not be coming back in the morning before school. The cloth will stay close to the telly so that there is a clear sign of when the TV is off limits and I know that if the obsession returns, that we can detox again and the boys also know this will happen. Balance is the key.