Not much to report. Less asking for tv and more playing.

I did have a moment this afternoon where I felt like putting the telly on. I had 8 children after school. ranging from 1 to 10 years and at one point the house became very boisterous and loud! The rain was like a waterfall so I couldn’t throw the doors open and let them out. For a moment I just wanted to put a film on and tell them to all sit down while I cleared up some of the mess that 8 kids can make in a very short period of time!
But I resisted that urge! and we got through that moment…… “This too shall pass” as they say!

This evening I was a little pre occupied with some things I needed to sort out, so Kenzie asked to ring nanny for a chat. And chat he did… for ages. He talked about the shrinky dinks that he and Brendan had made this evening and the baby fish in our tank.

Kenzie decided that he would like to listen to a CD in bed before bed, so he went up a bit early and listened to a Dr Who story.

Here is a pic of the boys working on their Shrinky Dinks together! 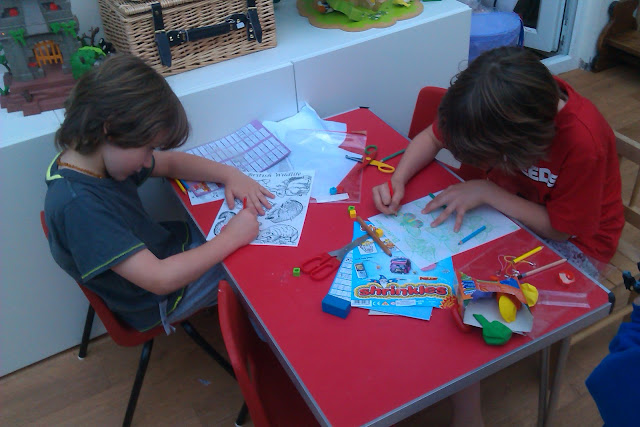