Today we had a visit to our local Special needs play center. We go every school holiday, once a week. It is such a lovely and friendly space and the children have the safety and freedom to play and explore in their own way.

We started off the day re-visiting the pumpkin play dough over Breakfast. Little “R” made a really cute pumpkin. You can see it on the tray in this picture. All by herself too! She also held up a piece of dough that she had been working on and said “look Pippa, Quack quack!” She had  made a duck! It is lovely to see her giving her creations meaning and telling us about what she is making. It is not always easy to see with children so young, but when they start to share what they have in their mind you get a whole new insight in to how that child thinks and what they like and find interesting. 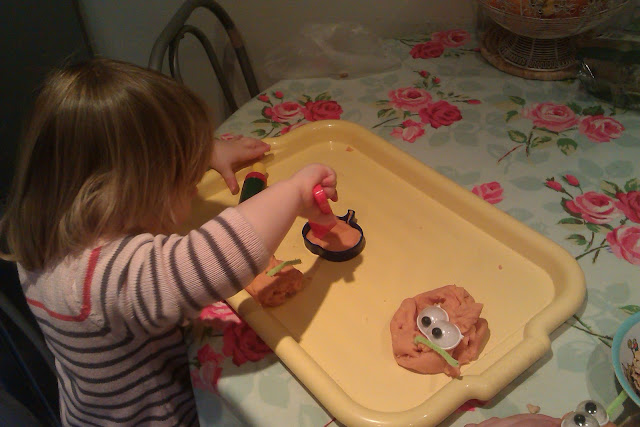 Kenzie worked on a Pumpkin man while he ate his breakfast! It’s very cute! 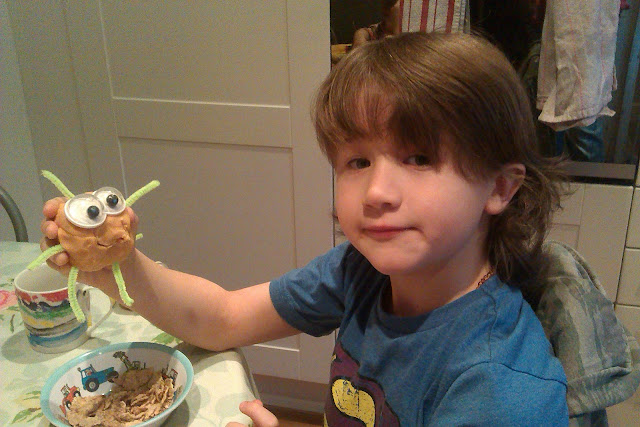 He also made a flat man. He said it was like part of the film “Toy Story 3”, Where Mr Potato head becomes a tortilla. I can see what he means. 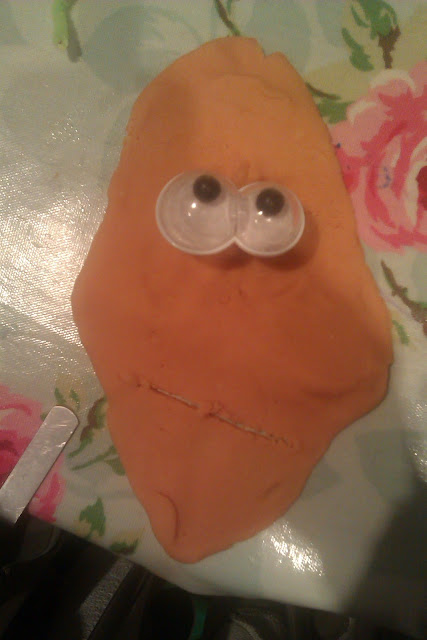 Brendan went outside and cut our pumpkin off the vine. We didn’t do too well at all with our veg plot this year. Partly due to our neglect (must try harder next year) but mainly due to the poor crop yield in our area in general this year. The weather was not on our side and very little except weeds have grown. The fruits have been very late to appear and they have not had time or the right amount of sun to ripen. This is bigger than i thought it would be though! 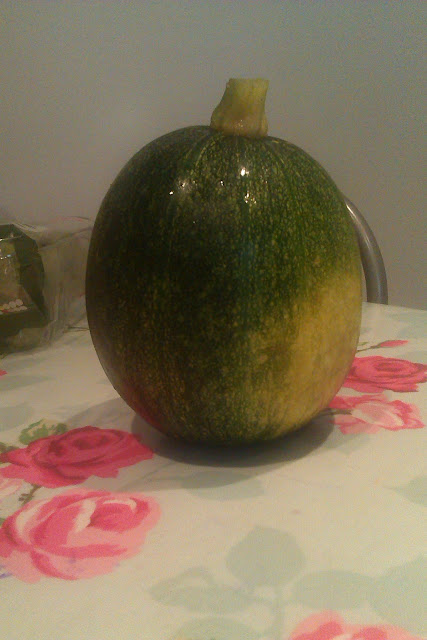 At the play center we started with some art projects. Little “R” decorated a bag and a box for Trick or treating! 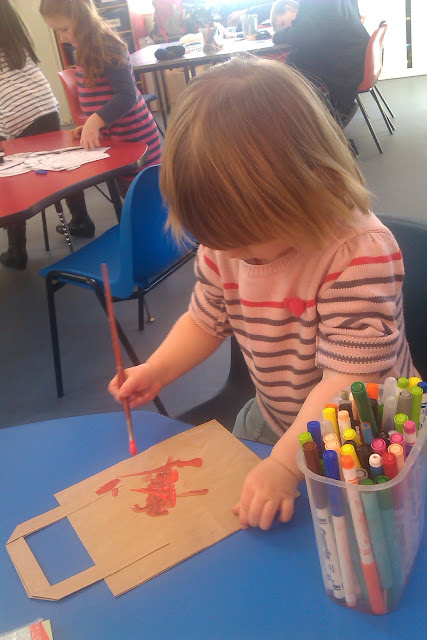 Kenzie also worked on one. Brendan was with a friend in the playroom. He has not really been himself and he made a den to sit in with a blanket. 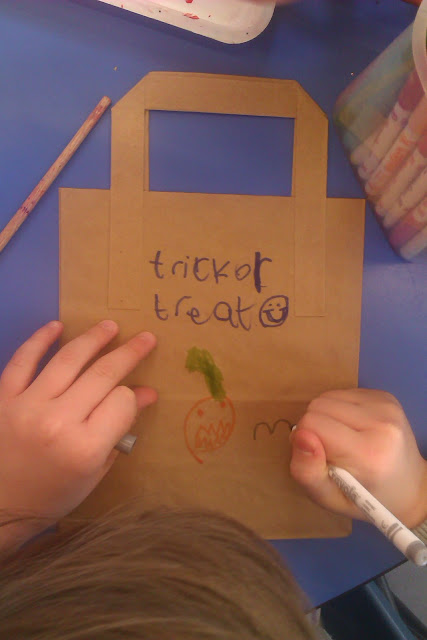 Little “R” found the sensory tray. It was Spaghetti and glitter with plastic bugs in! She liked it! 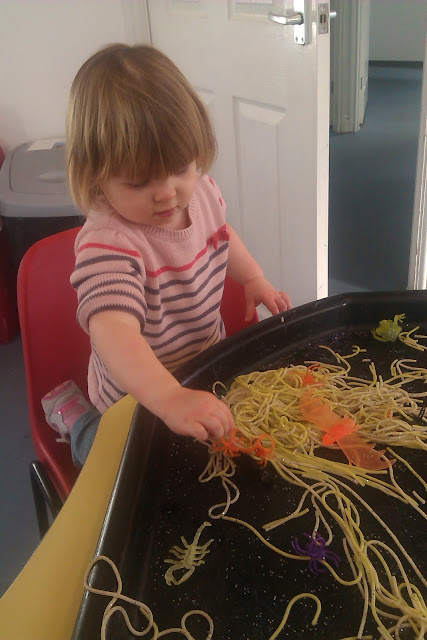 After a play in the ball pool and a stop for lunch, we took our pumpkins for carving. There was a lovely man there who had lots of things for carving and helped all the children get started. Our little pumpkin was just right for “R”‘s small hands! 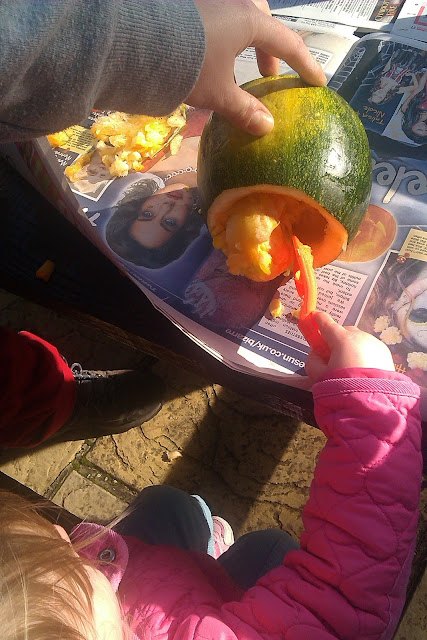 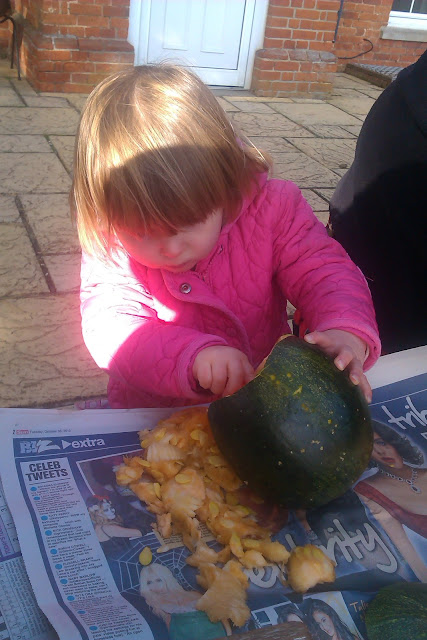 Kenzie and his friend hollowed out their pumpkins. Kenzie and Brendan had some pumpkins that Grampy grew them! 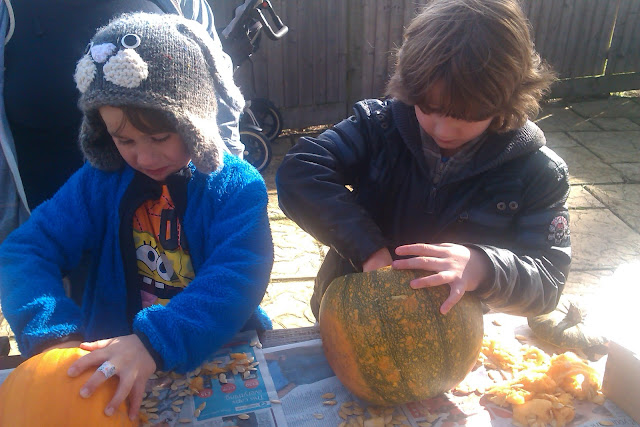 Once hollowed out we set about drawing our faces on them, ready for carving. Little “R” let the man carve her one and she pushed all the pieces out with her fingers. 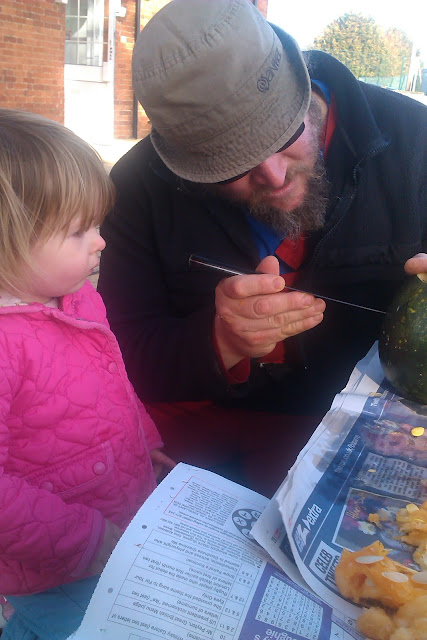 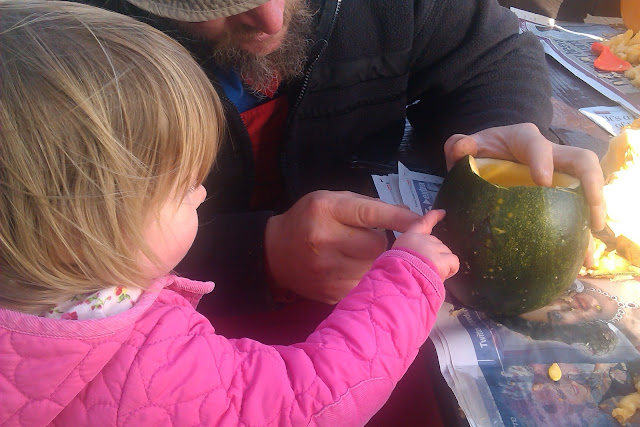 Kenzie liked the mushy “guts” of the pumpkin. He chopped all the fleshy bits up and looked at the seeds attached to the stringy membranes. 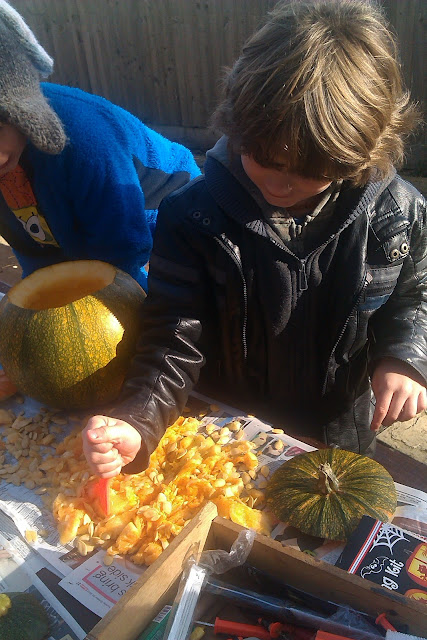 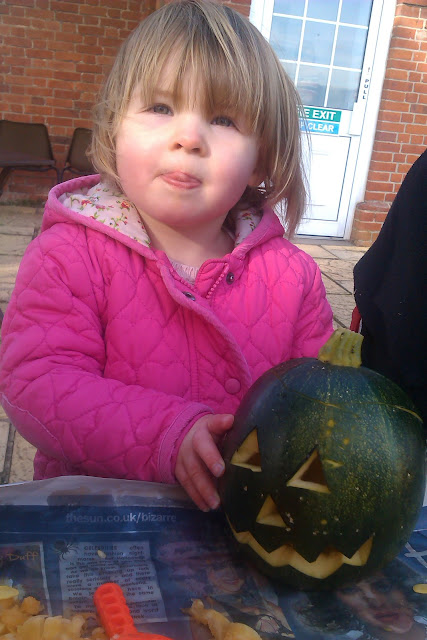 “N” designed his using a marker pen and then started to cut the shapes out. He needed a little help but managed most of it by himself! 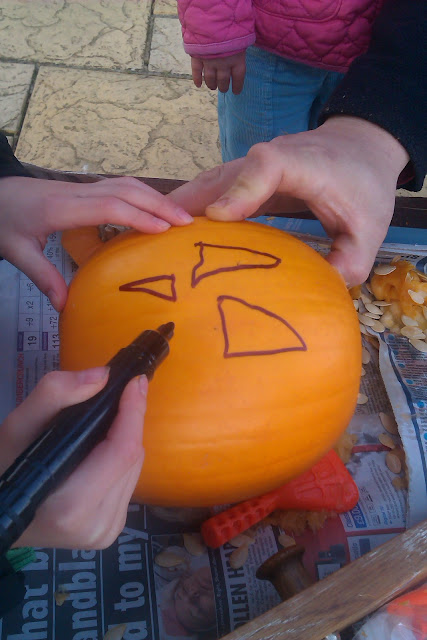 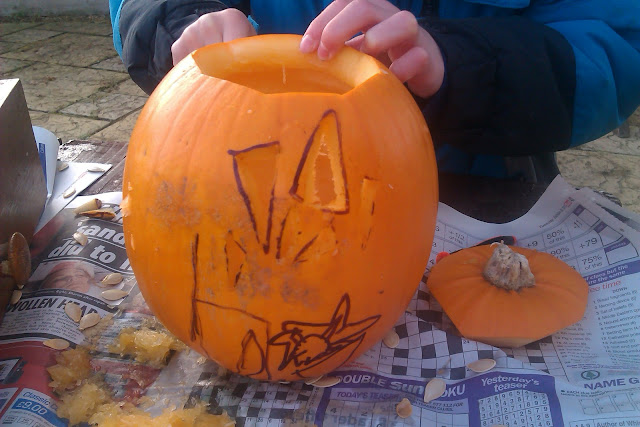 Kenzie drew and carved little faces out of his and then asked me to cut out a bigger face on the back it! 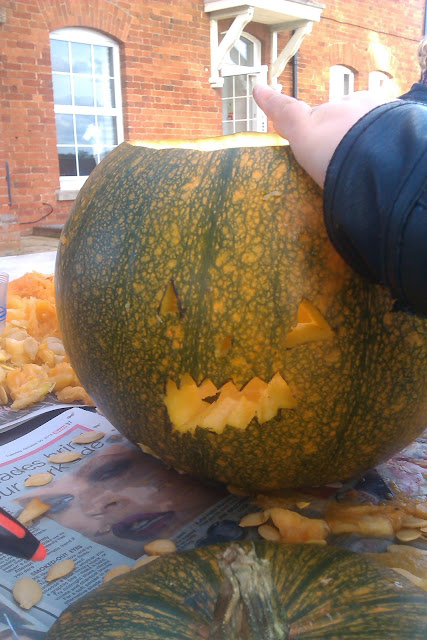 Brendan decided to do his once we were home. He had an idea of what he wanted to make and it was not going to be possible while we were out. 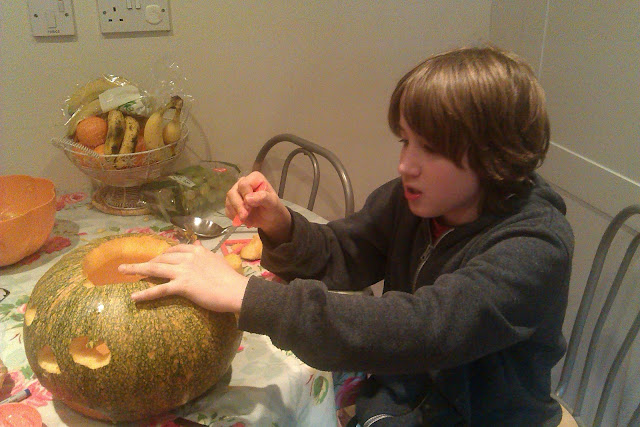 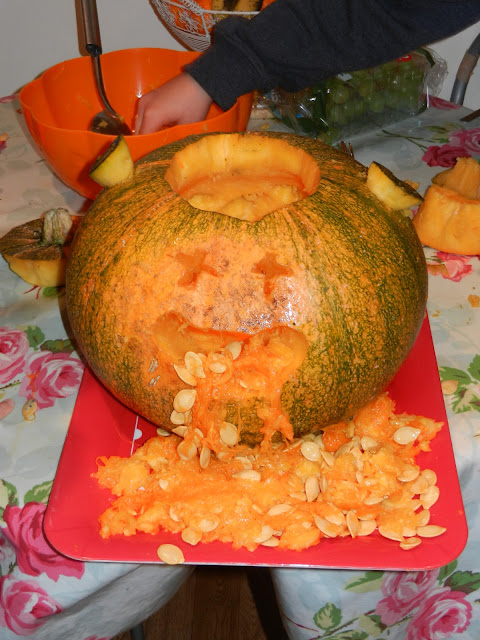 While he worked on that, I worked on making pumpkin beef burgers for dinner! 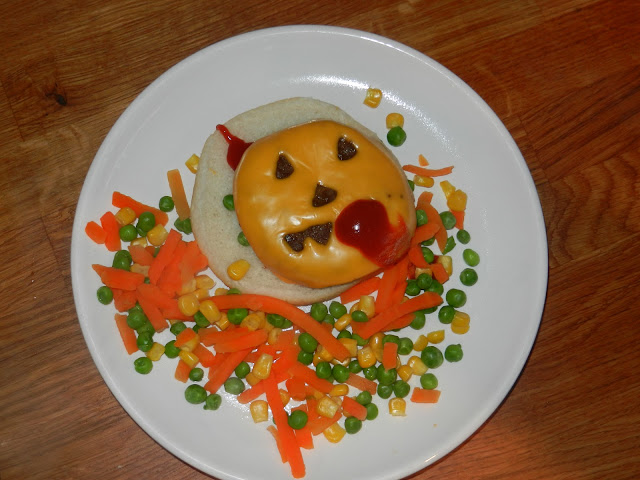 Not a culinary masterpiece I know, but the kids loved them…. actually so did Lee and I! 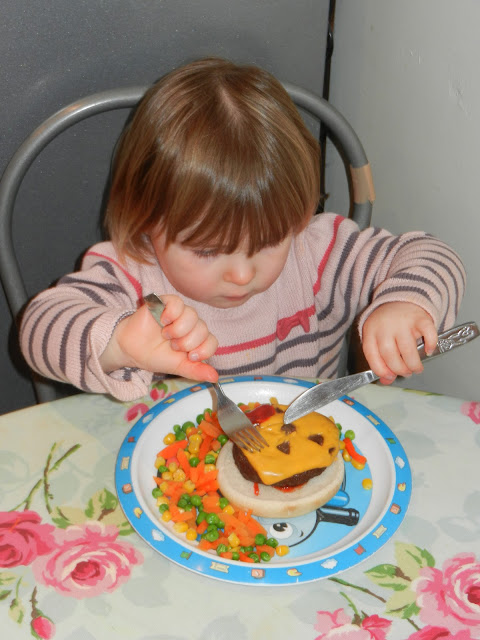 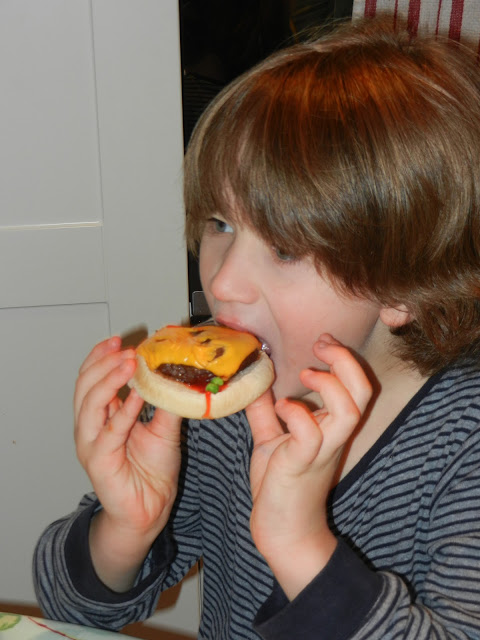 Tomorrow is party day! Halloween! Trick or Treating! What a lovely week we have planned!