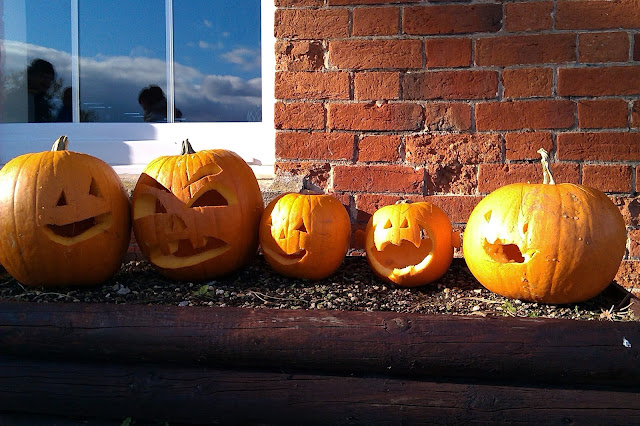 Today we had lots of fun carving our Pumpkins. 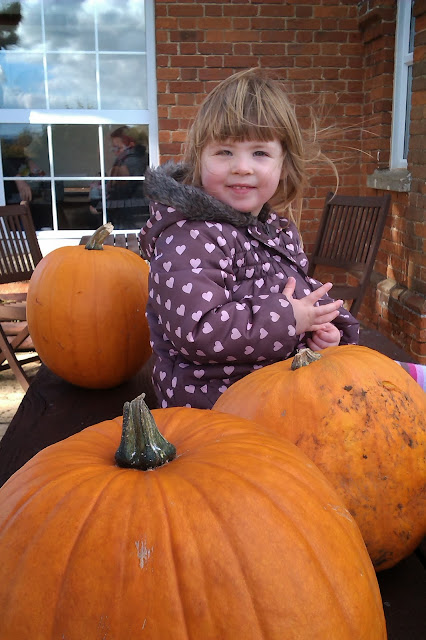 We had a great time designing the pattern to carve in to it but first of all we needed to scoop out all of the inside. Little “R” was not very keen on the feel of the stringy pulp and the seeds and many of them found it quite tricky to scoop out the insides so I ended up with my hands inside lots of seedy goo! Once the insides were on the newspaper, Little “R” was more willing to try touching them. She spent some time trying to pick out the seeds which were a little slimy!
I didn’t ask her what she wanted to carve to start with and just let her explore and experiment with the small carving tool. She spent quite a long time pushing it in to the skin and feeling the resistance before it pushed through easily and then she would pull it out and try again. 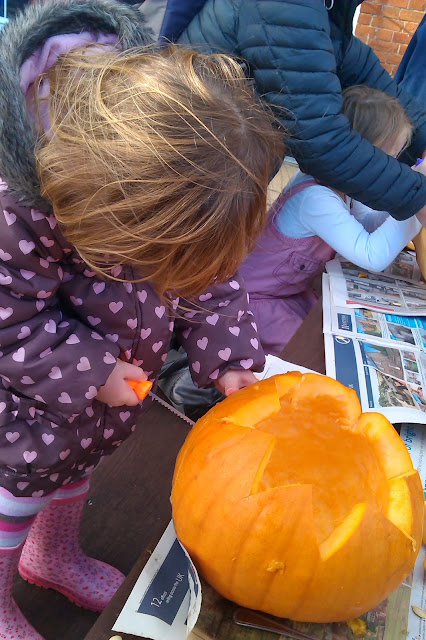 We had some extra help today with my sister and sister in law coming to play. My sister offered to help Little “R” and asked what shapes she wanted to cut in to her pumpkin face.
She asked for Triangles so she helped her cut triangle eyes. She asked for an Aeroplane nose that goes high in the sky! So my sister tried very hard to make that for her and then they worked on a mouth with sharp teeth! Little “R” showed real interest in this activity but her focus started to wonder before the task was finished. I think this was probably because she needed so much help to complete it.

CHARACTERISTICS OF EFFECTIVE LEARNING:This was a really fun Autumn and Halloween activity. We have been talking about this for a few days, building up to the activity and looking at pictures of carved pumpkins in books so that the children knew what we were going to do and could gather some understanding and ideas of what they might like to carve on to theirs. During the activity Little “R” was engaged and motivated. She held concentration for most of the task but started to loose interest once she found she needed quite a lot of help. She shared her ideas about what she wanted on her pumpkin. Thinking creatively by asking for fun things like Aeroplane noses! She used her current understanding from the pumpkins she has seen in the past and used that to make her own. Once she had moved passed the reluctance to touch the pumpkins insides, she became interested in looking at the seeds and pulling them out from the stringy bits. Exploring and finding out new things.