As part of this weeks vegetable topic we have been exploring and playing with lots of vegetables. They have been chopped, dropped, licked, sniffed, rolled, bounced, kicked like a ball and all manor of other interesting things. They are now, as you can imagine, looking rather battered. I thought now might be a good time to do the painting activity that I had planed,
I gathered a selection and chopped them in half. I squirted some Tempera paint on to paper plates and then placed the chopped veg on to them.
I tried to match, as closely as I could, the colour of the vegetable to the paint. I also stuck a fork in to each halved vegetable as this made it much easier for the children to hold the vegetable, dip it in paint and then print it on the paper. 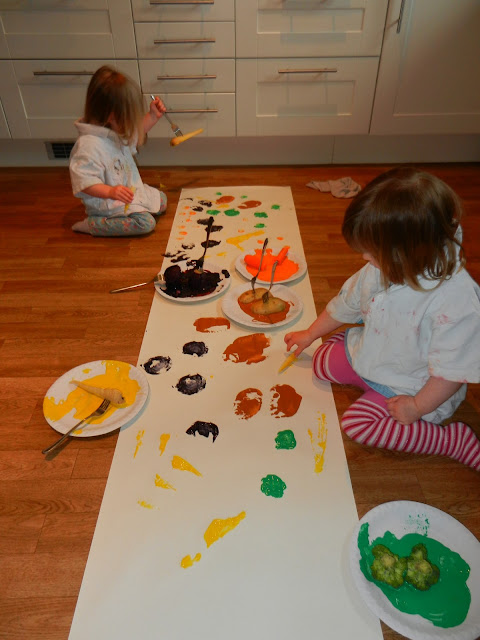 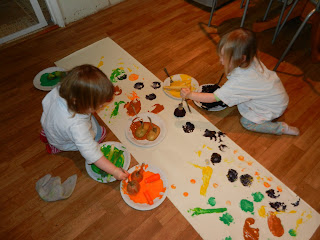 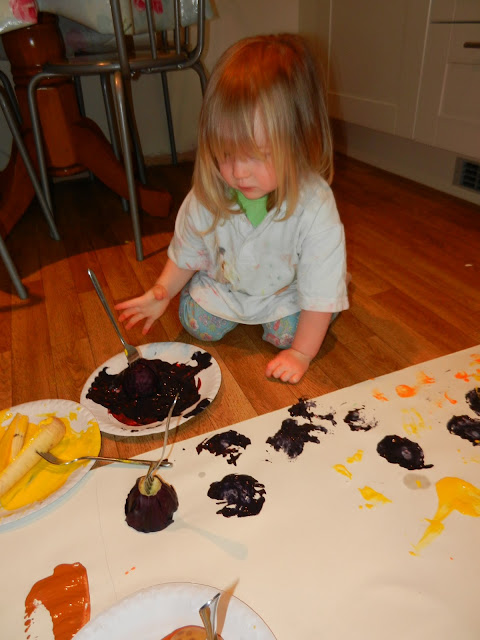 We talked about the colours and the names of each vegetable. We looked at the patterns that each one made. 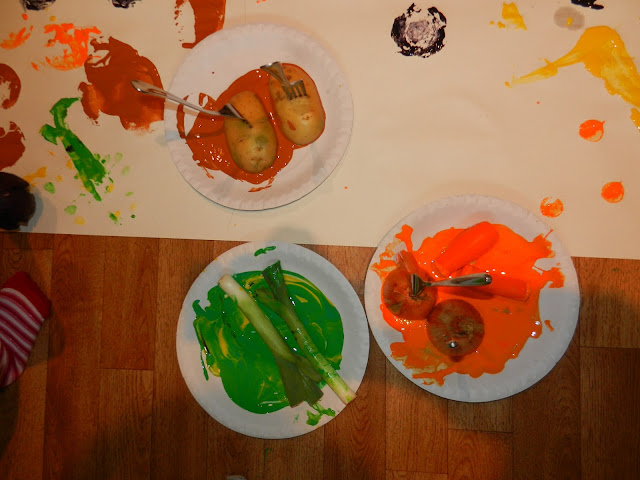 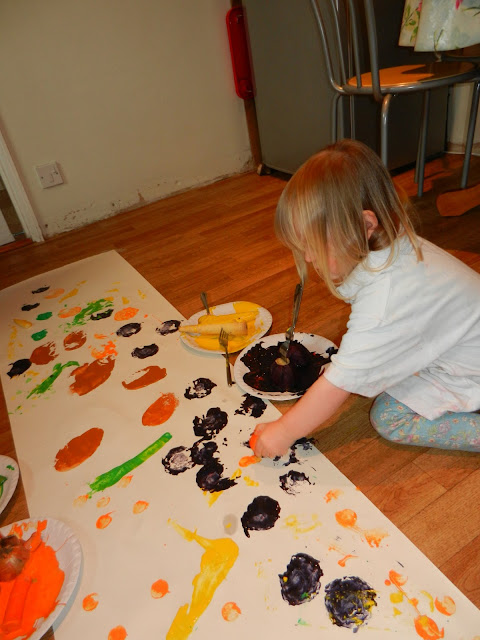 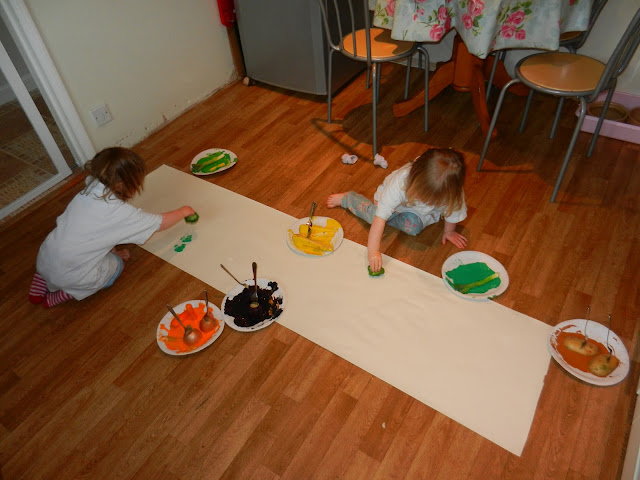 Once we had filled one strip of paper, we hung it up to dry and lay out another strip. It looked like a big piece of vegetable print wall paper!
I chose to use large paper as the vegetables were quite large. I wanted the children to be able to print away for a length of time without the frustration of running out of space too quickly or not being able to fit on a print.  I drew a line down the middle of the paper and explained to each child which side was theirs and to be honest they mostly respected this and each others space. 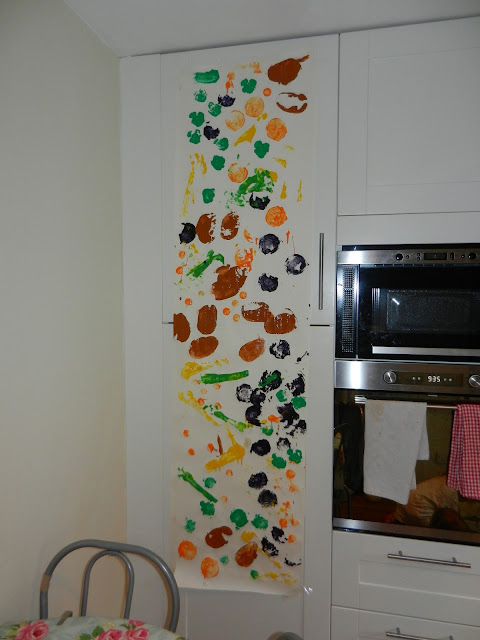 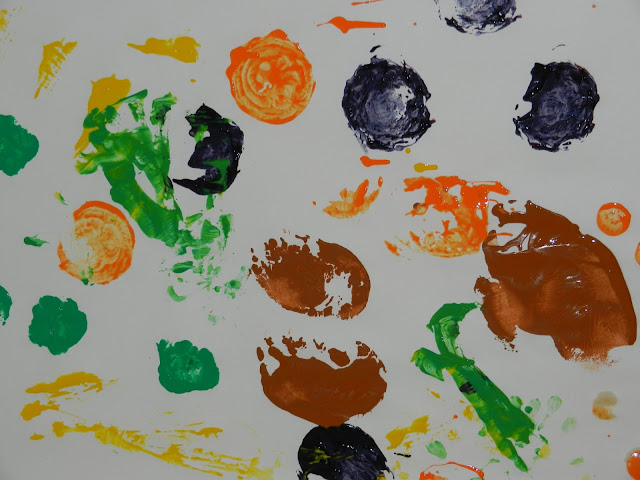 The second time round, the girls needed less of my involvement and modelling of how to print. This was what I hoped for and it was great to see them become a bit inventive. They started to roll the sweetcorn over the page so that it made a speckled pattern. Little “R” also broke a piece of sweetcorn in half and printed with the small end to see how that changed the print that she was making. 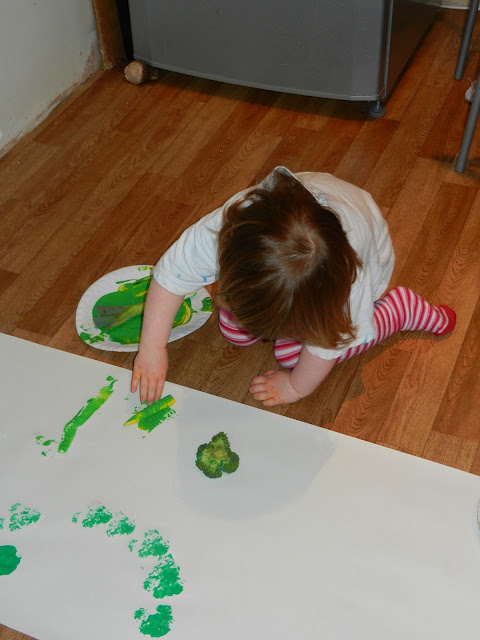 Little “L” started to paint her prints in neat rows across her paper! 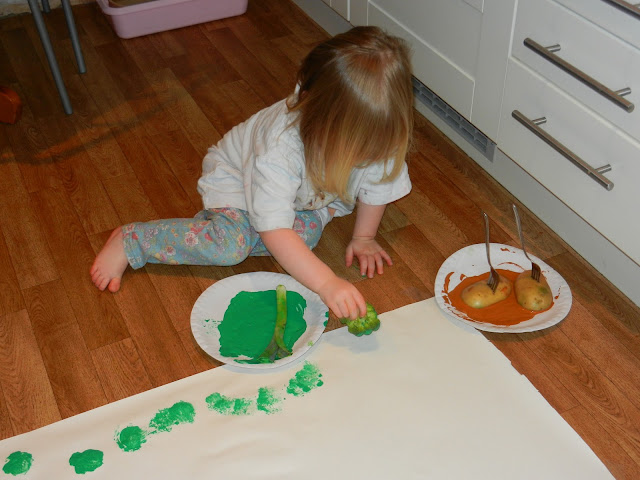 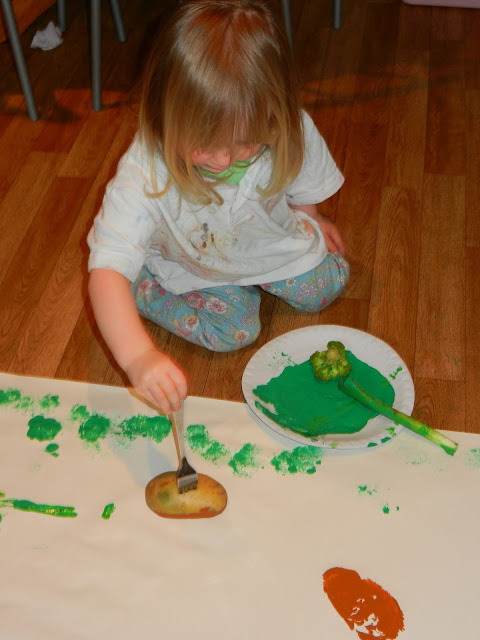 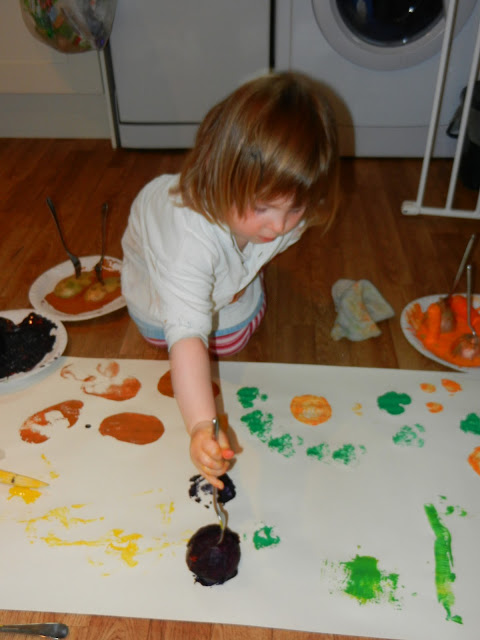 Little “X” arrived a little later in the day but he really enjoyed this activity as well. 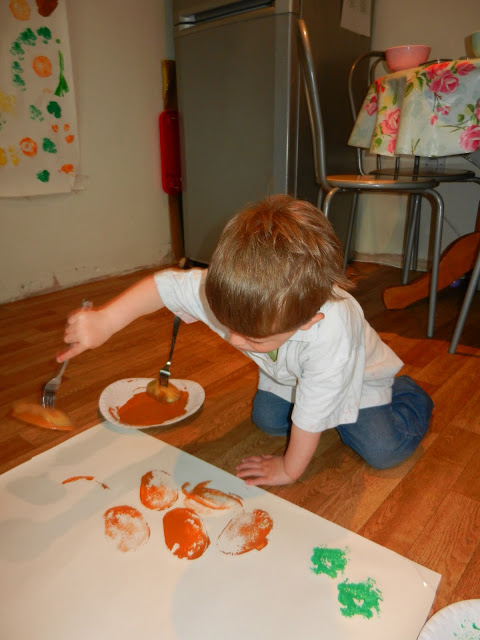 I noticed that both Little “X” and Little “L” are making much clearer prints this time compared to the prints on our African men a couple of weeks ago. They seem to have got the idea of pressing down and then pulling up again. 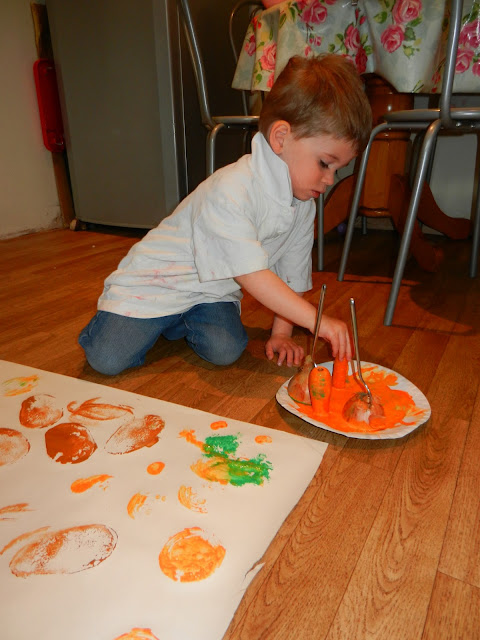 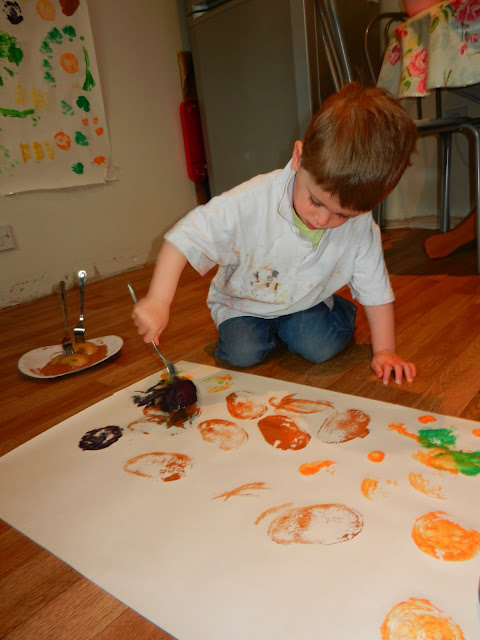 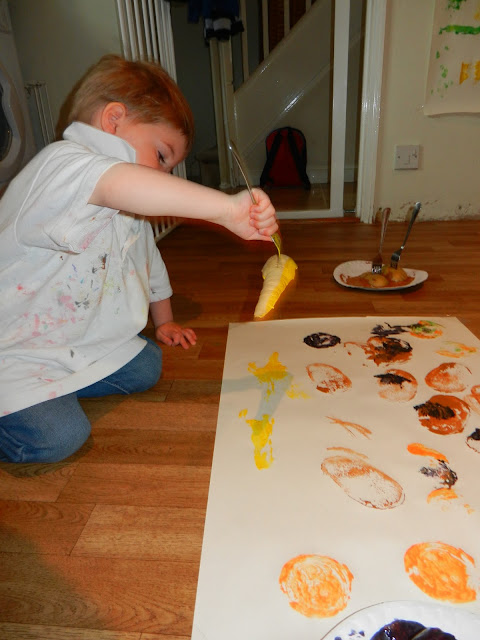 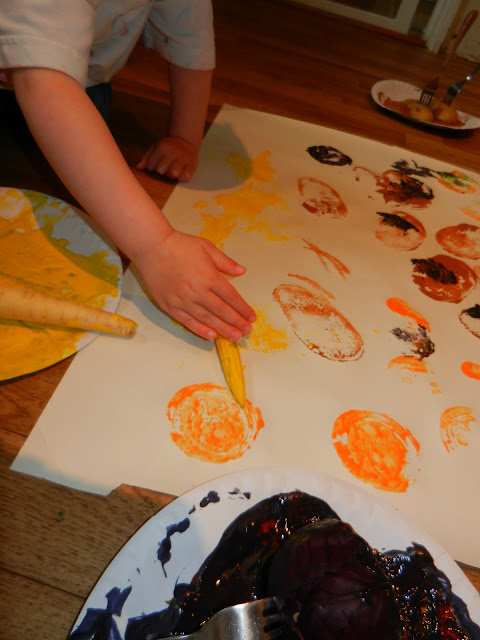 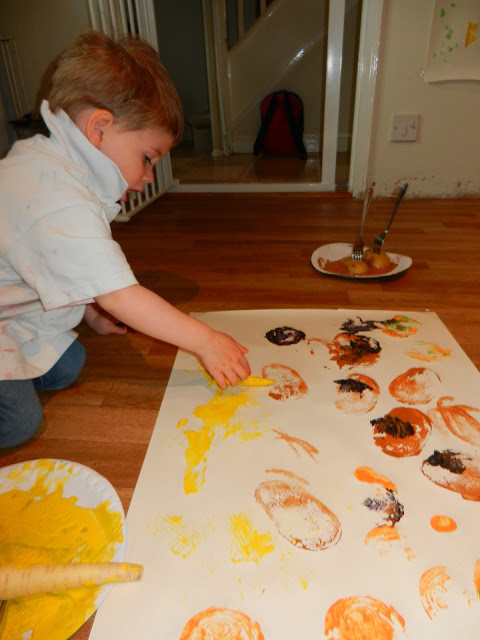 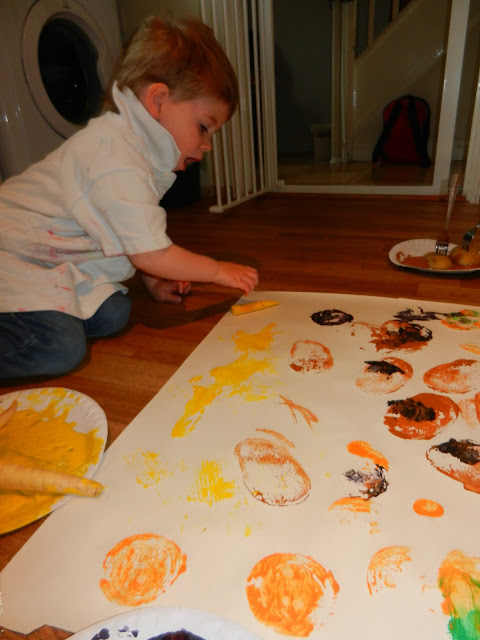 The children all found this activity fun and it was a good chance to recap on the vegetable names that we had been learning this week. They were using knowledge that they already had from our previous printing activity and applying what they had learnt that time, to this session. As a result the children made much clearer prints and there was much less pushing the print item around to spread the paint. There was lots of sharing and asking for a colour or a specific vegetable to be passed to them. Each child was involved, concentrating and wanted to add their mark to this big picture!