Today the children an I talked about Remembrance Day. I find this a bit tricky to talk about with 2 and 3 year olds as they have no idea about war and death in this way. So I tell them that this is a time when we remember special people who did good things for our country and allowed us to have the  life and freedom that we have now.
I told them that at this time of year you will see people selling poppies to raise money for these special people and when you wear a poppy it means you care about these people.
We looked at some poppies and took one of the British Legion poppies apart so that we could talk about the different parts of it before remaking it again.
You will need: 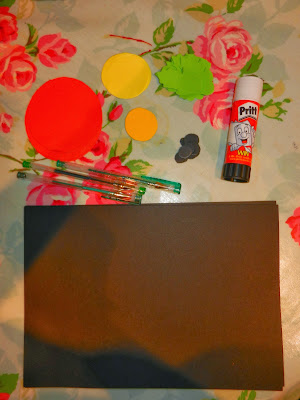 Some of the poppy pictures we had seen had yellow in the middle between the red and black. The Royal Legion poppy just has red and black. Our Poppy had the green leaf pointing up.
I asked the children to use the pieces to make their own poppies.

Little “L” started to stick her circles down on the paper. Starting with the biggest red circle and working down to the little black circle. She often referred back to the poppies we had looked at even stuck the leaf pointing up like our Royal legion one. 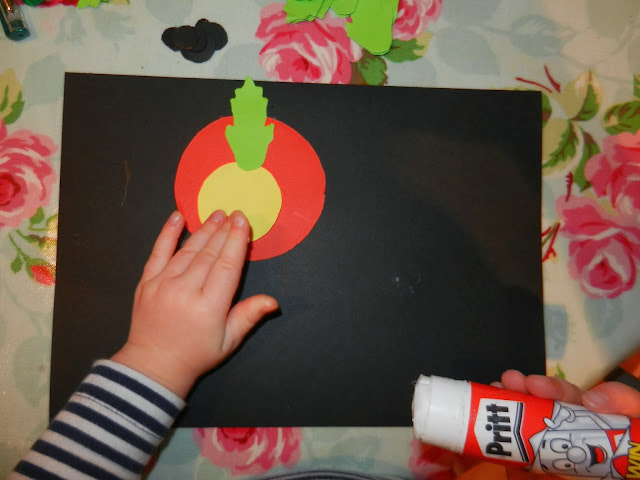 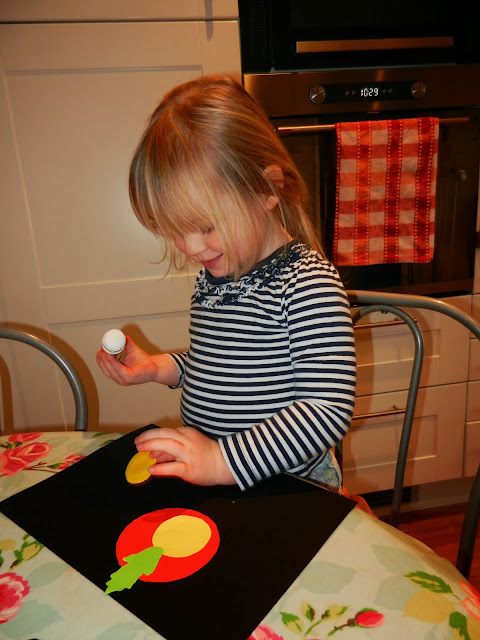 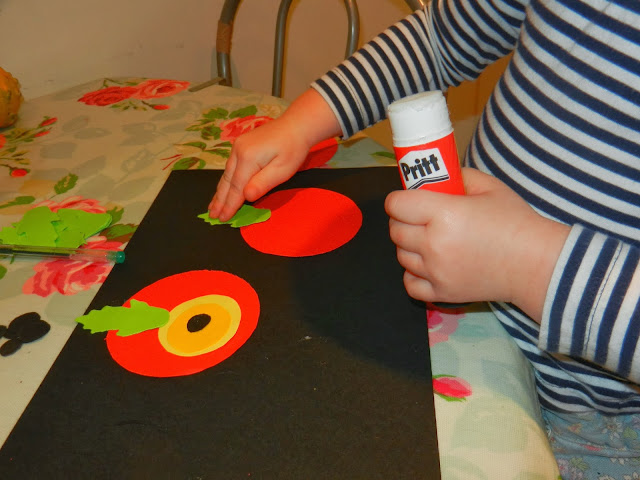 Little “C” watched Little “L” and started to copy the way she was positioning her circles but very soon he placed them in a more random way. He got a lot of pleasure from gluing them and splatting them on to the page.He told me the colours as he stuck them down. 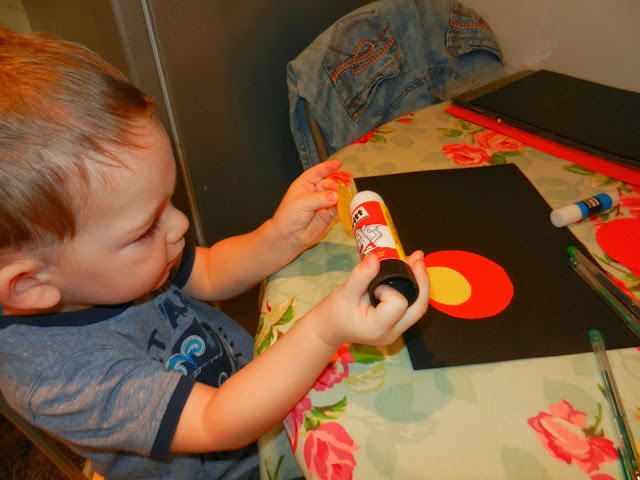 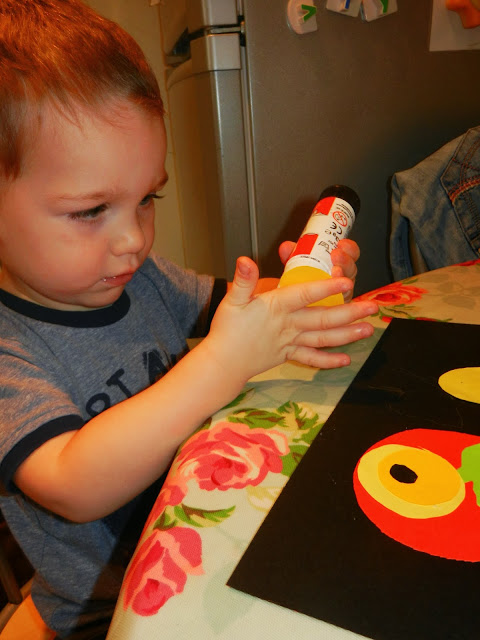 Each one of his circles had the black centre added. 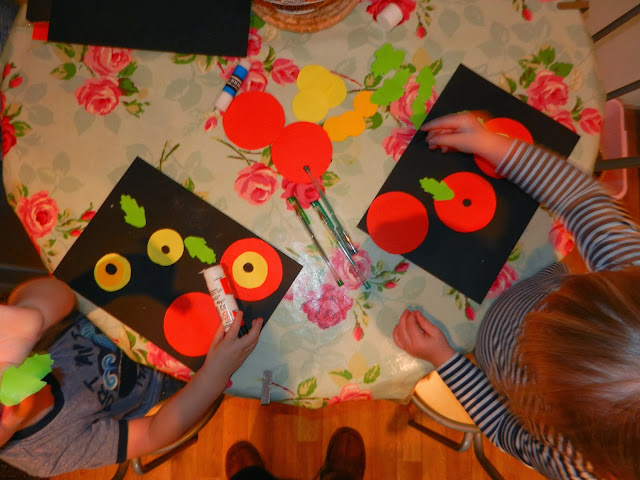 Every picture Little “C” made, he added a little mark to the corner of the page and told me it was his name. I thought this was very sweet. Most childcare professionals write children’s names in the corner of their pictures. I have never really thought about it but Little “C” has worked this out and now tries to write his own name in the corners. 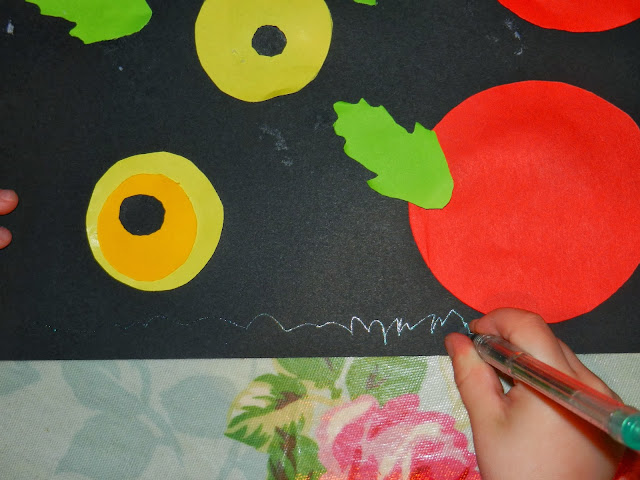 Little “R” wanted all of her poppies to have yellow bits on and some of them had “2 black eyes!” 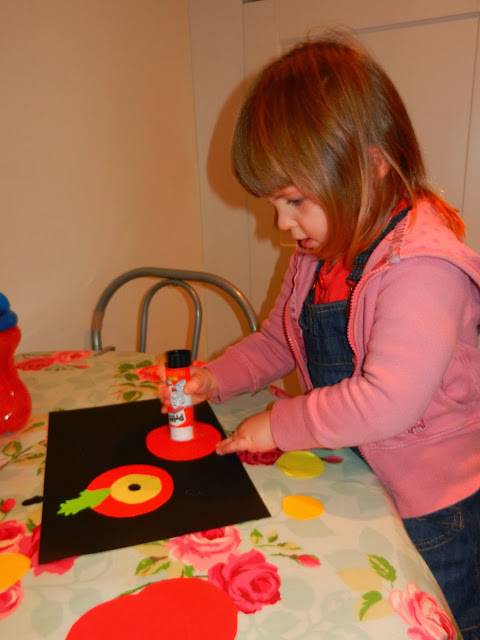 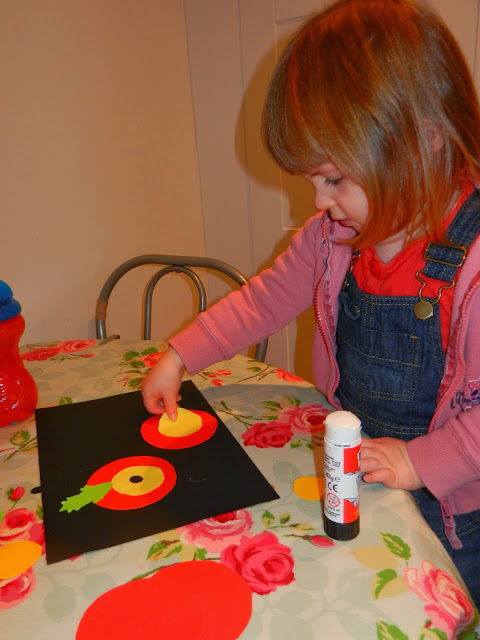 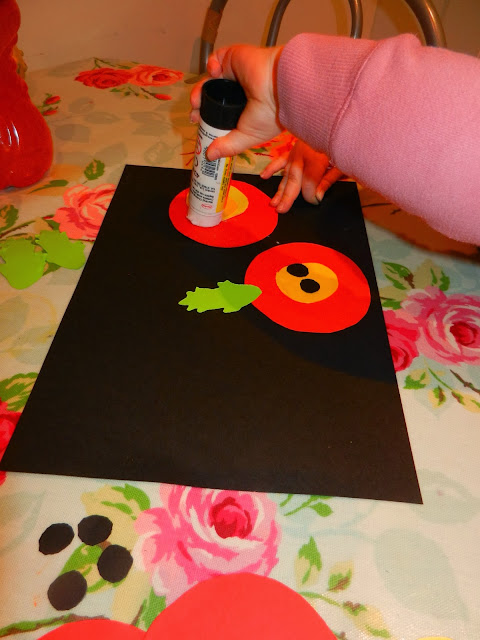 CHARACTERISTICS OF EFFECTIVE LEARNING:Today’s craft was a way to raise the subject of Remembrance Day. To help the children understand, in a very simple way, about our countries history and how we honour these important people. The children were also able to view pictures of different poppies and then make their own. I offered a limited amount of resources as too much can become overwhelming at this age and result in “Artist’s block!”  If I was to offer this to older children then I would give them a wider selection of materials and scissors to cut them up in their own way. Tomorrow I will offer different materials to the children and see how they use them to make poppies. Each child was keen to give this a go and used their own memories and knowledge of what poppies look like, to make their own poppies on the paper. They all thought critically about how they wanted to arrange their circles. Which colours they wanted to include. Some of the children used the green pens to draw stalks on their poppies and others did not. They had their own ideas and ways to complete this activity. Everyone was involved and engaged. They created picture after picture for a good 20 minutes before deciding to do something different. There was colour recognition and counting taking place as children added circles to their picture. They talked about the sizes of the circles and used size sequencing to layer them up in order, from largest to smallest. Little “L” in particular was keen on this approach!