The sun shone this morning for the first time in a week and the ground was dry! Well the fields and parks were water logged, but the garden and the paths were dry! A day with out rain!
Little “E” and Little “L” had just got back from a week in Cornwall and we felt like today was the day to start our Seaside and Sea creatures topic!

“E” often asks to play with the Sea creatures and today we also pulled out the building blocks so we could make tanks for all of them. “E” told me he was making “enclosures!” I was very impressed with him using a big word like that!
I asked him if he had been to a Sea life center while he was away and he said he had. He told me he had seen Sting rays!

Brendan was not at school today. He has had a nasty cough since Sunday morning and his legs were still hurting form the sponsored walk, so he had a day at home!
He helped E make “enclosures” for all the creatures and between them they worked out what creatures needed the bigger ones and which could live in smaller ones. 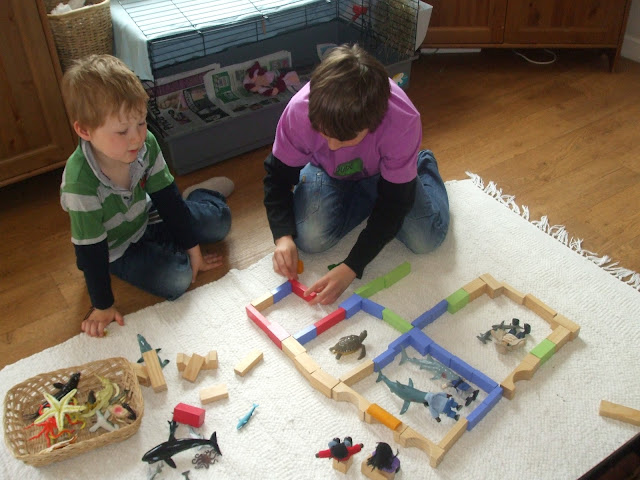 E decided the Killer whale  needed a large one so he set about building it. I mentioned that when I was little, I had seen a display with a killer whale in. It was in Canada and I was 3 years old. I remember getting very wet when it jumped out of the water!
Brendan said he would make a display tank. We added some seats for the people. The tank then got relocated and attached to the whale enclosure, with a little door to let them in and out! Great thinking! 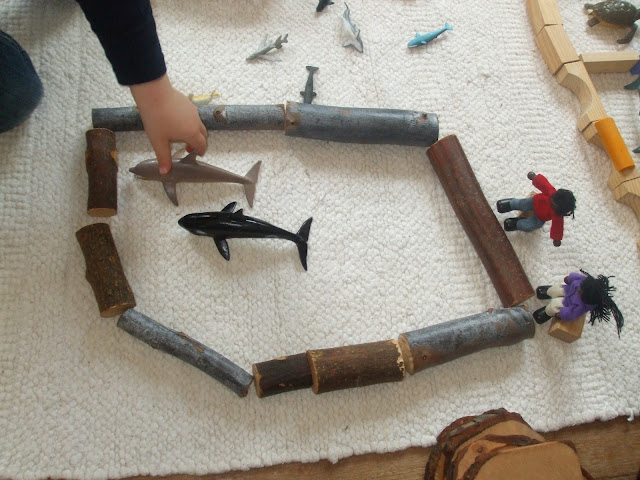 We added people and Brendan set up a yellow splash zone. Apparently one man wanted to get very wet so sat in it! 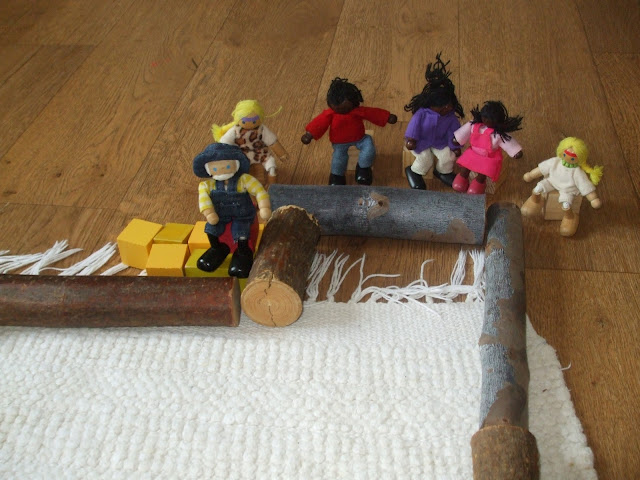 There was then talk about how we would house the Giant Octopus and her babies. The boys worked on a tank for her and “E” also gathered up the babies and popped them in with the mummy! Sadly this lady got too close and was pulled in! Health and safety would not approve!! 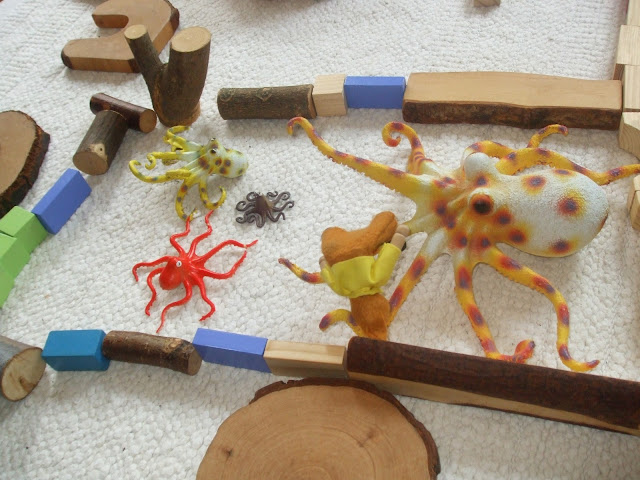 Then it was time for the whale display! Wow! Isn’t he a magnificent whale! 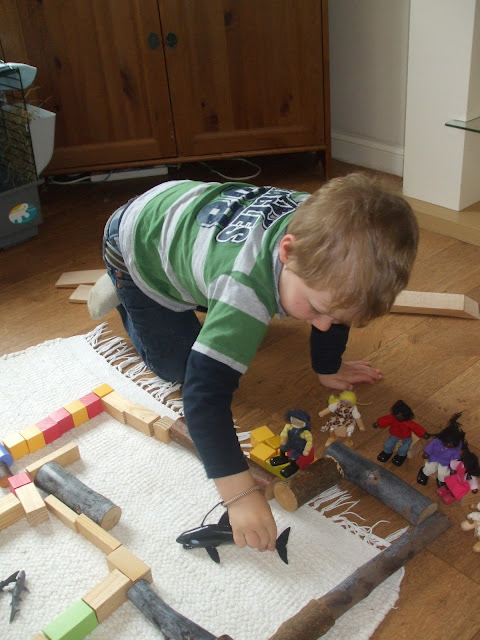 After a while, a few people had some accidents…. some got eaten by sharks, others by baby hammer heads! 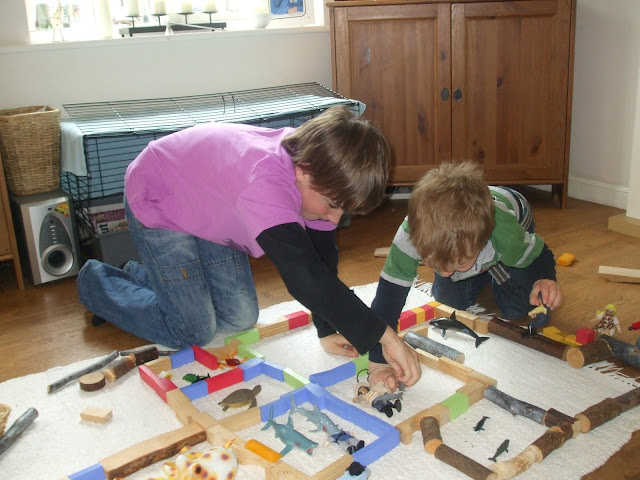 Once we had started to loose interest in this game, Brendan moved on to a game on his laptop and Little “L” woke from her nap. We changed our St Georges Day display to a beach! Some of the creatures from the Sea life center were reintroduced in to the wild and swam around in our sea!
We made the people beach towels to lie on and found them little umbrellas to shade themselves from the sun! 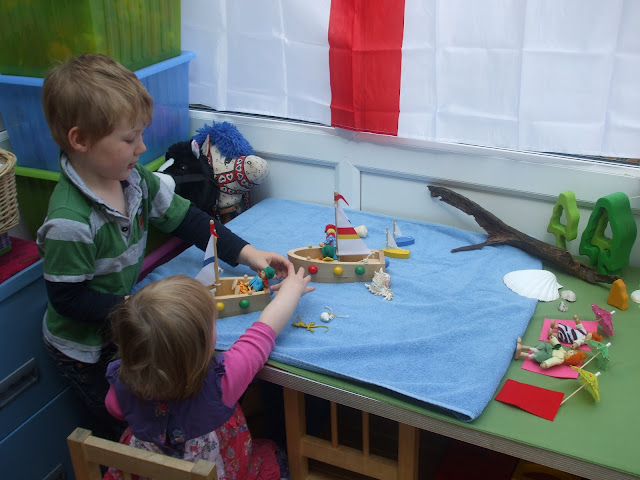 Some of the people took the boats out to sea for a spot of fishing!
Opps looks like there is a man overboard! 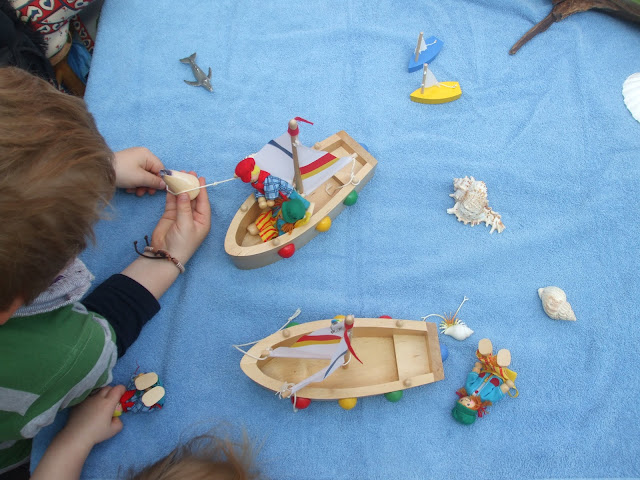 I am really looking forward to my summer holiday now! All this talk of sun and sea!