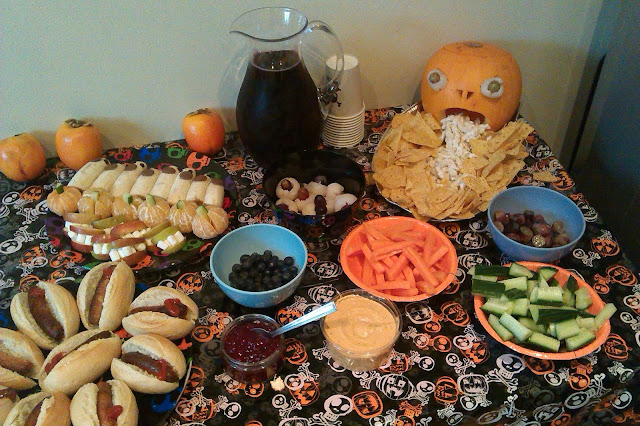 This years Halloween has been lots of fun. The children were all old enough to understand that it was all good fun and that no one was really scary. We decorated the house but in a fun way. Nothing overly spooky.
The older children all helped me to make the Halloween party food. We had looked online the day before to see what Halloween foods we could make. They gathered their ideas and we made a shopping list of what we would need. Kenzie and I went to the shops after work and got the bits we needed. 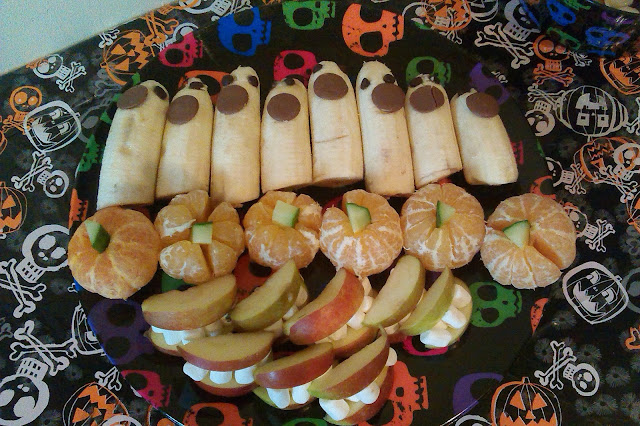 Little “R” and two older girls “A” and “I” designed and carved a Pumpkin together. Little “X” arrived whilst this activity was taking place but he was not keen to join them. He wanted to play with cars! 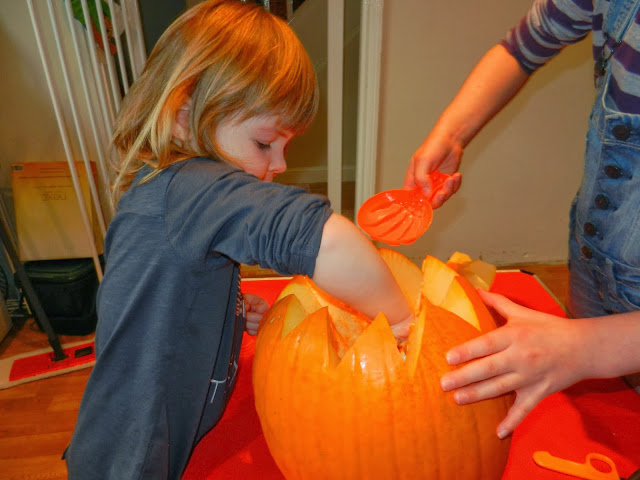 We also enjoyed an apple carving activity. Making little shrunken apple heads. We used apple peeler’s to take off the skins and then carved faces in to them. We used some of the foraged apples we had that were not good enough to go in the crumbles we have been making.  Once a face has been carved in to them you can float them in to a bowl of water. We did work out that the apples naturally float with the core running vertically so we carved them facing that way up. 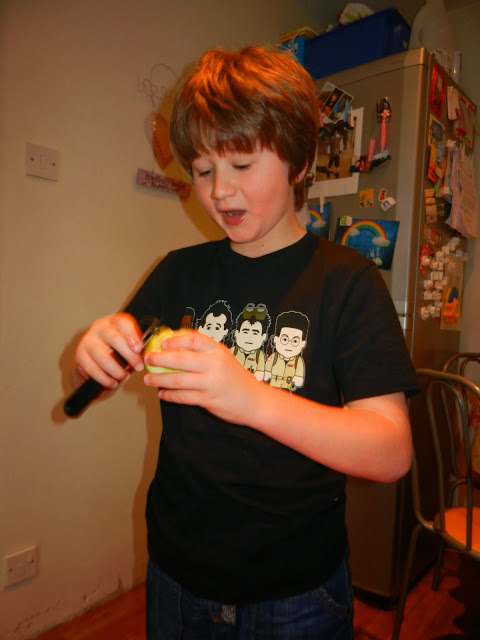 The peeling of the apples was quite tricky but the older ones eventually managed to get the hang of it after a few attempts. Little “R” gave it a really good go but it was a bit too tricky for her. Little “X” still wanted to play with his cars and said “No thank you” when asked if he wanted to come and join in! 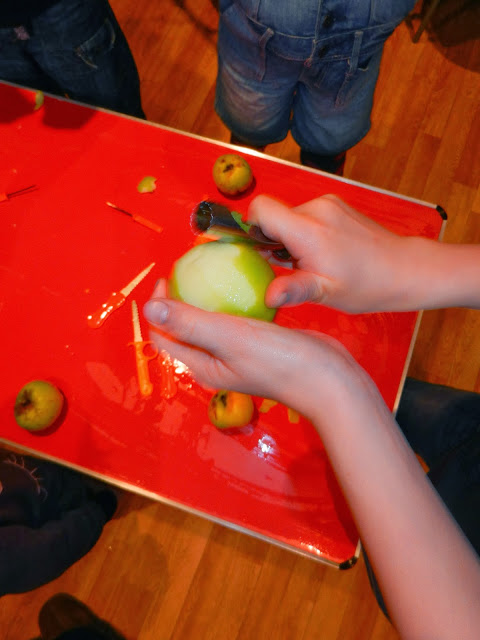 Little “R” used the pumpkin carving tools to make holes in her apple. She really focused on getting the blade in apple and talked through what she was making.
“that’s an eye….. and that is a another eye!”

She was really careful with the carving tool, made sure she used it safely and often told me that…..
“I need to be careful and not cut my fingers!” 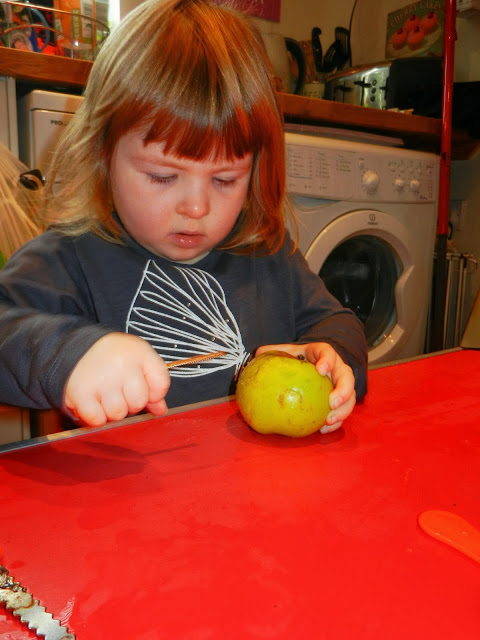 Brendan made his in to cubes! 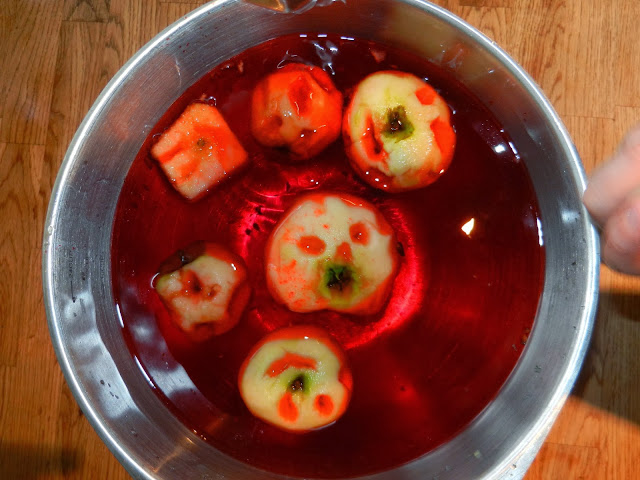 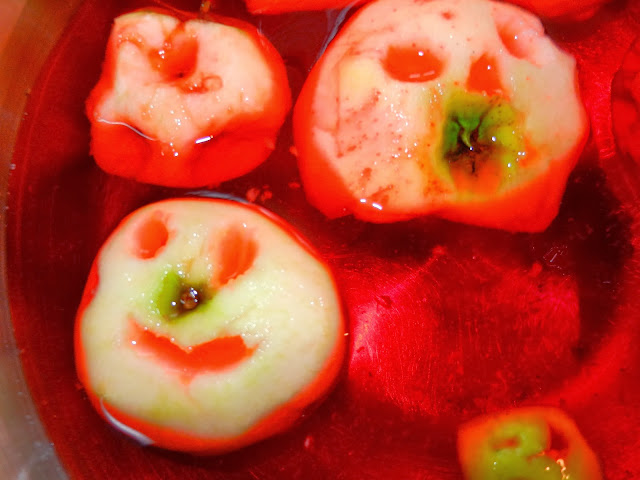 We also made some Cotton bud skeletons. I have seen this on several sites over the past few weeks so I can not give credit to the original poster I am afraid. It is such an effective and easy craft to do with children of all ages.

I showed the children a picture of a skeleton and explained that we could use the cotton buds as bones and make our own. This seemed to spark interest in everyone, including little “X” who dropped his cars and came to join us!

Little “R” placed her cotton bud bones on to paper in what looked to me to be a random order but she knew what it was and worked very hard with great concentration making it just right! 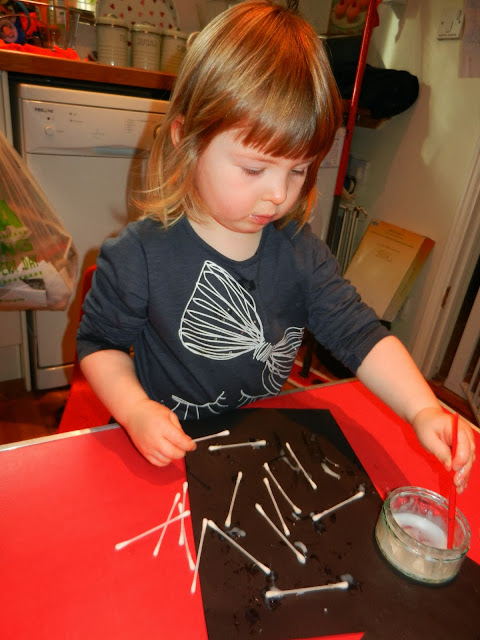 She used some paper to draw a skull and added eyes a nose and a mouth. She also added cheeks! 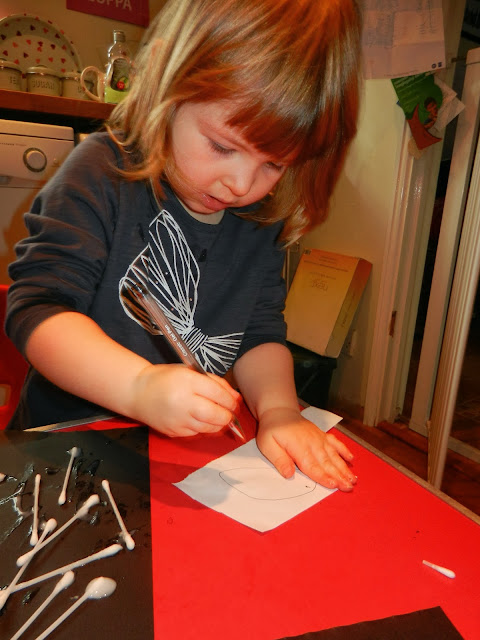 We cut it out and then she stuck it on her picture! 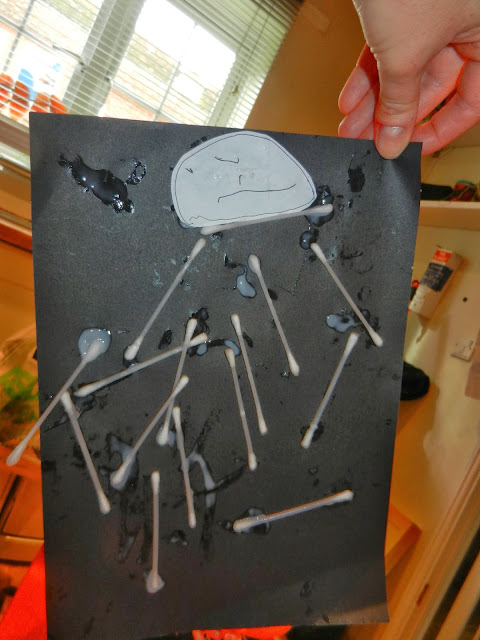 Little “X” was also very engaged in his creating. I started off by showing him how to make a body with one cotton bud and then adding two legs. He was watching very carefully as I dipped each one in the glue and stuck it down. Then I left him to make it by himself. I was interested to see how he would add them. His approach was very different to little “R” He lay all of his in a mainly horizontal way which looked a lot like a skeletons ribs! I watched with fascination as each one was dipped carefully in the glue and then placed on to the picture. 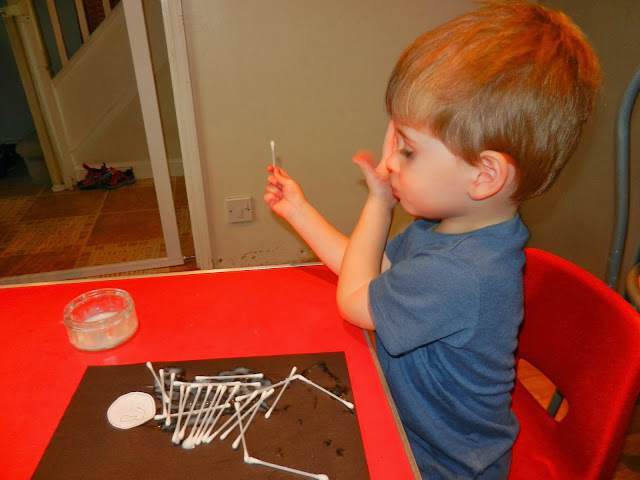 I drew him a head and asked if he would like to draw a face on it so we could add it to the picture. I explained that the bone inside our head was our skull. 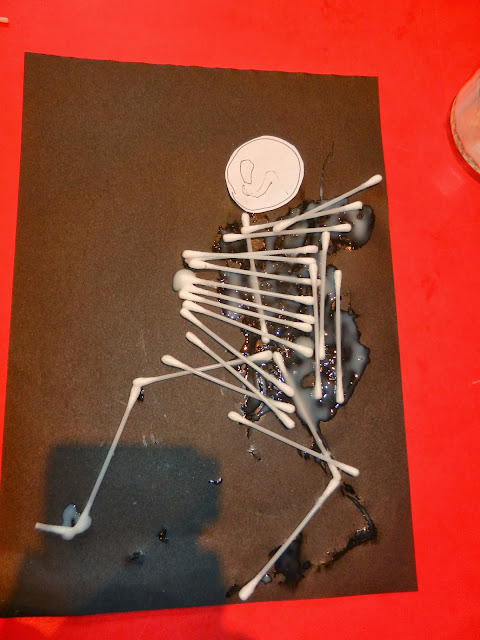 I love how each skeleton was unique. Not one child tried to create the same as another. They were all focused on their own interpretation of a skeleton. It was great to see one project create so many different pieces of art! 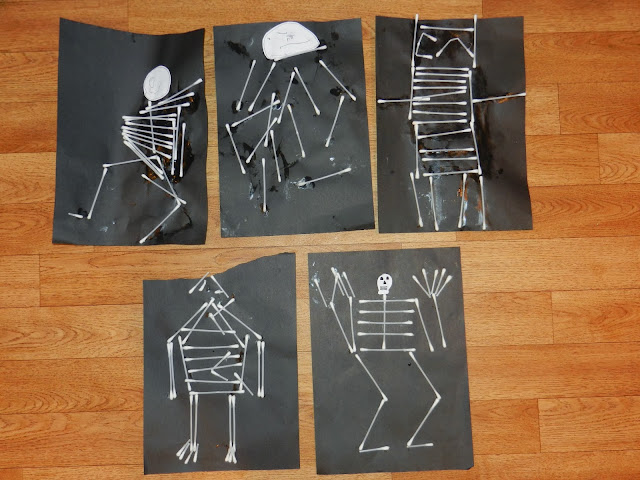 We worked together to make the food for our Halloween lunch as well. Here Kenzie was helping to make our Pasta puking pumpkin! He was adding Doritos around the edge to scoop up the pasta. 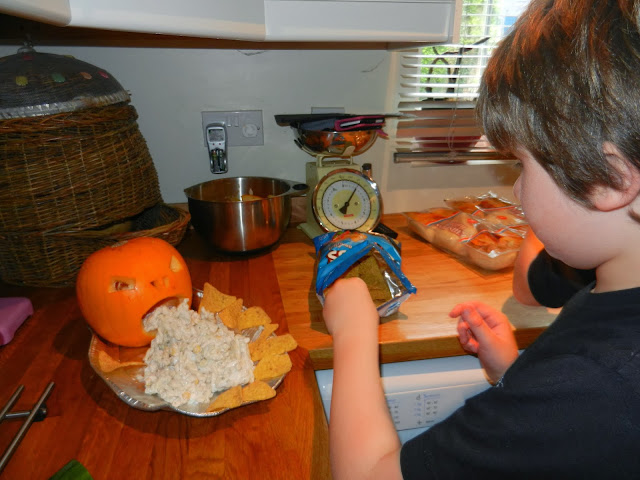 Everyone worked hard to make the food look spooky and interesting and everyone was keen to try all their lovely creations! 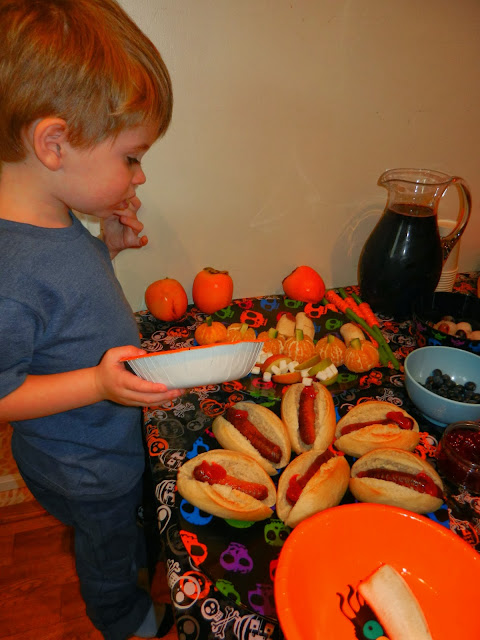 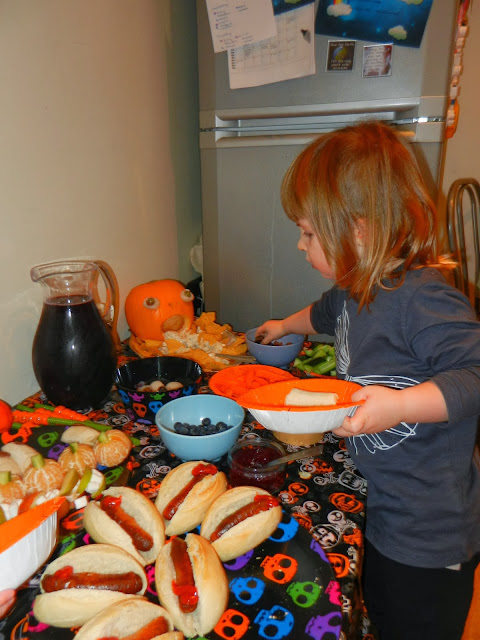 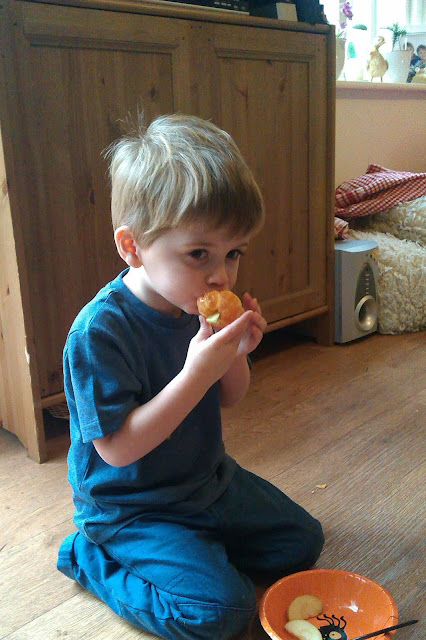 During nap time the children played a game that Brendan created. The idea was to try and grab a little chewy sweet out of the Pumpkin every time his top opened. They had a great time playing this. Lots of giggling! 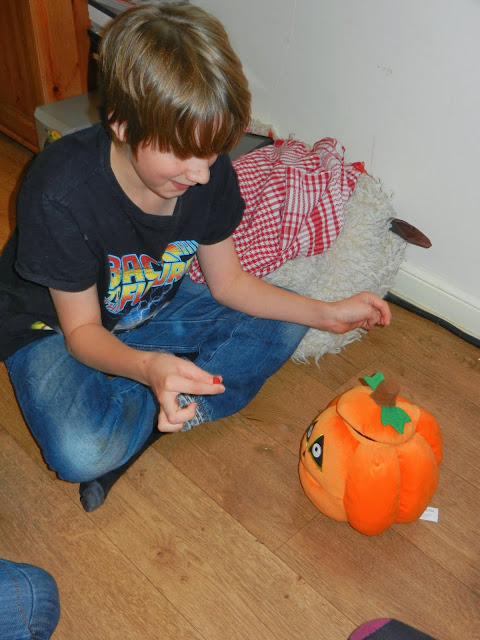 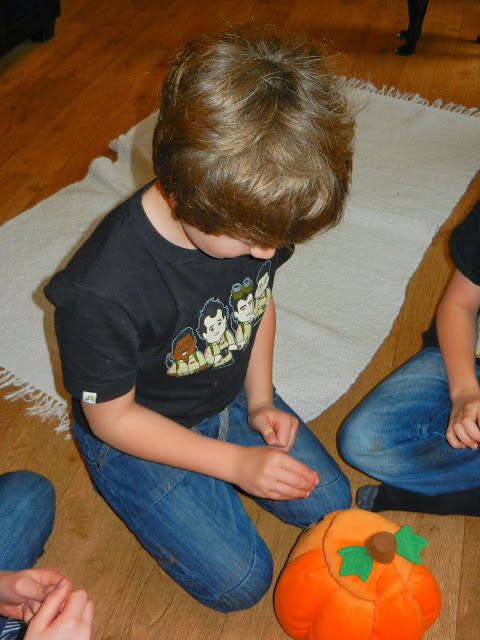 Later in the day we all dressed up ready to go to the village Halloween party! 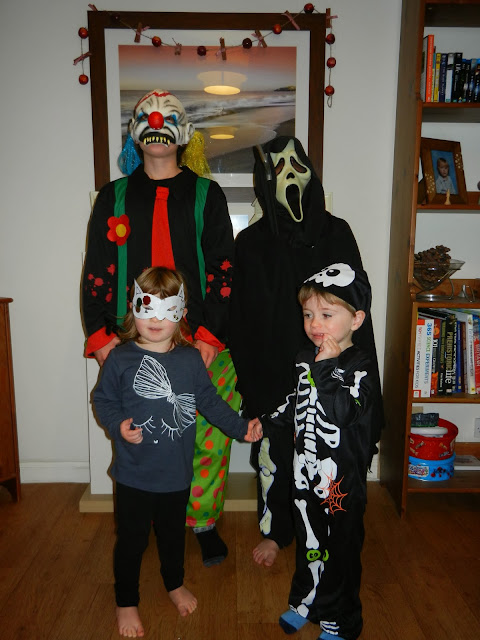 There was a colouring competition! (Kenzie won this) 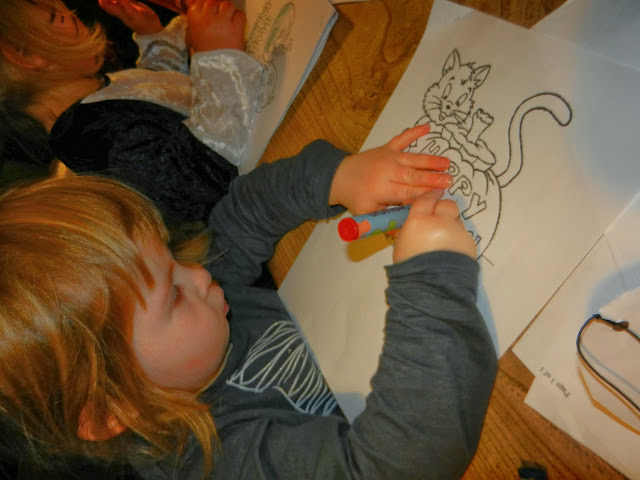 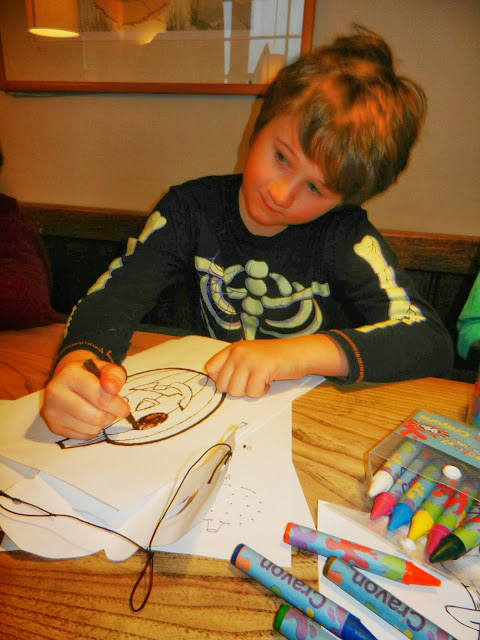 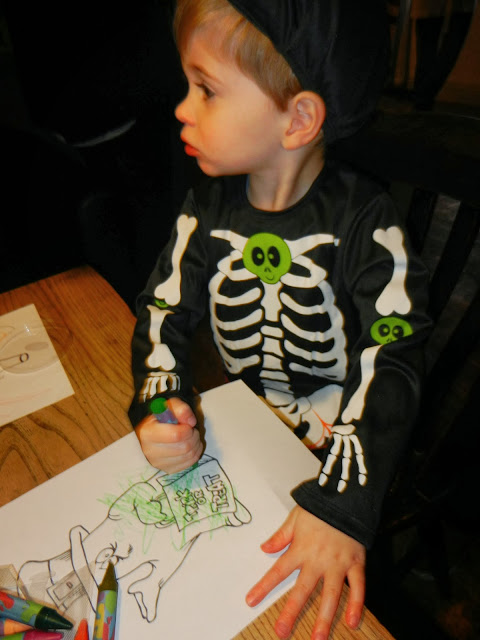 Stick the nose on the Witch! (Little “R” won  this) 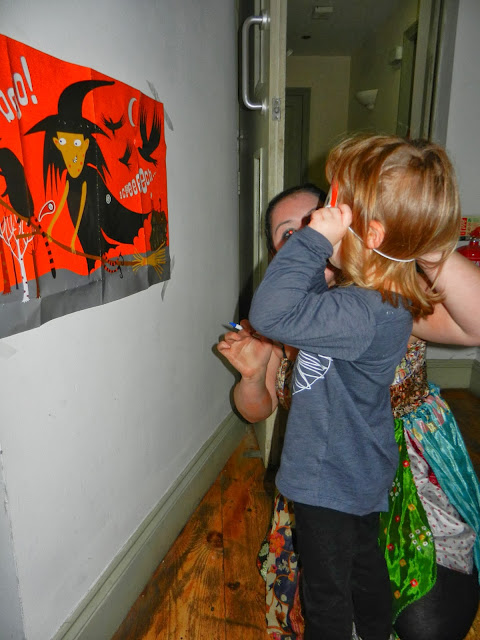 And lots of Lovely food! 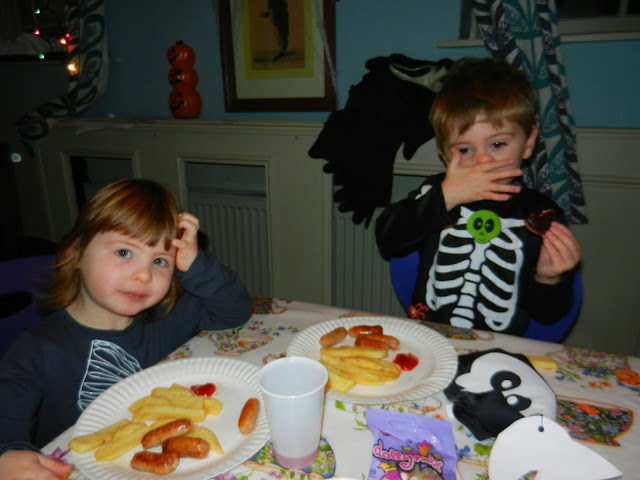 Everyone had a great time! We topped it all off with some trick or treating!

CHARACTERISTICS OF EFFECTIVE LEARNING:
There were so many different things happening today and so many areas of learning taking place. Little “R” was motivated and keen to try all the activities that I had planned. She Thought critically about how she wanted her pumpkin to look whilst working with others and considering their ideas as well. She listened to them and between them they came up with a design. She also had to think about a face and how she could cut that in to her shrunken apple head. Her skeleton was another example of how she used her knowledge of something and interpreted it n her own way. She clearly enjoyed what she set out to do and gained pleasure and a boost to her confidence and self esteem when she achieved her end result. She enjoyed the party and socialised and engaged with all the children there. She even met new people and spoke to them and drew them in to her play.
Little “X” was not so keen to ry all our activities but the ones he did take part in, he really enjoyed. He was keen to make his skeleton in his own way and drew the head to go on the top. He knew a head needed eyes and a nose and a mouth. He was very outgoing at the party and made friends with a little boy of just under a year an a half. They chased each other around and he kept saying “chase me!” and then laughing and running off. He took part in the pass the parcel and colouring competition. Waiting his turn to open the parcel and then getting excited to find chocolate inside. There was a lot of personal and social skills being developed today. Lots of playing games where he had to wait his turn, which he did beautifully. He used wonderful manners by saying please and thank you without and prompting. He was a little worried by some of the costumes but reassured himself by saying “It’s just Kenzie, its not real”. I thought this was very mature and was impressed by his ability to control his fear with logical reasoning!