Today saw the start of our Halloween fun week! Even better, it is half term so everyone gets to really enjoy the Halloween activities.
I have set up a few mathematical activities with a Halloween twist, with the hope that it will spark excitement and interest. Many of the children can count quite well but I have noticed that number recognition is not really there yet. This is very normal as most of my little ones are between 30 and 36 months and the Early years Outcomes state that between 30 and 50 months we should be looking for a child to
It is not expected that a child will recognise numerals accurately until 40 to 60 months, and even then children often only recognise numbers that mean something to them. For example their age or house number.
Little “R” is 37 months and can recognise her age (3). She also recognises 2 as that is Little “L”‘s age. She is quite competent at counting past 10 but gets some numbers muddled between 10 and 20.
This activity was very simple and I have deliberately focused on recognising small numbers and only up to the number 5 for now. Once we have spent a few weeks on these we will move on to numbers up to 10.
I used some foam Halloween shapes that I bought from a £1 shop and used wooden numbers that I found cheaply on Amazon. We looked at the numbers 1-3. These have all been significant to her at some point even if she doesn’t remember it. She has been all of these numbers in age. We have other children in our setting that are these ages and it gives me an image for all the numbers to help her remember them. We remember things much better if we have a visual reference for them.
We started with 1.
1 is the age of Little “T”.
1 pumpkin. 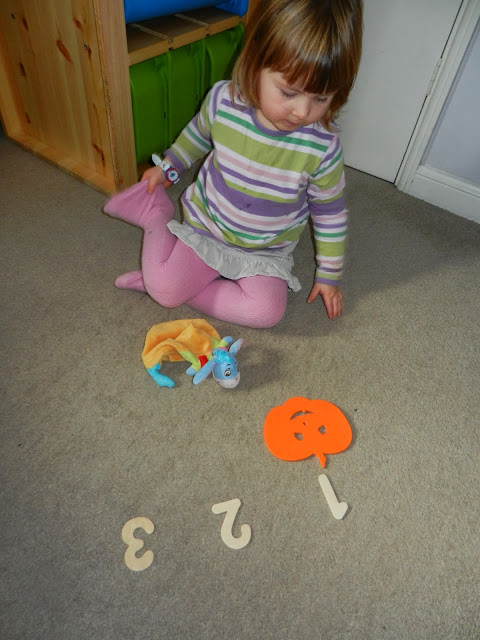 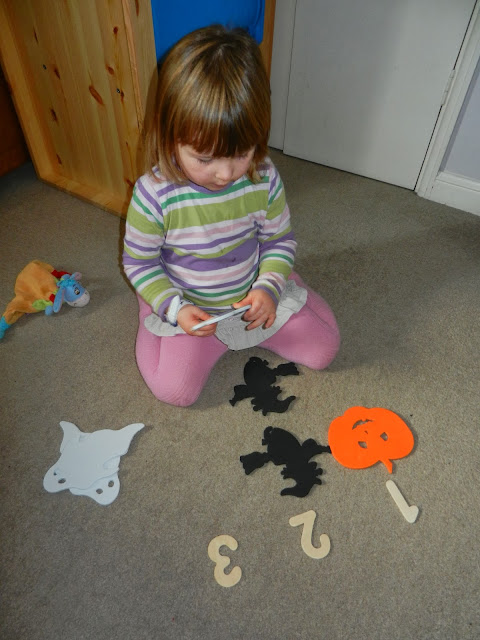 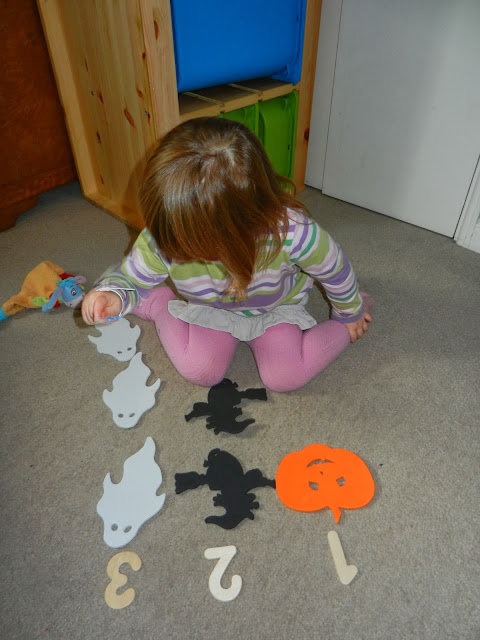 This was a really simple to set up and a good way to help Little “R” recognise her numbers. Each one now has a visual reference for her to draw on and I hope to play this with her every day to reinforce it in her mind.

The second activity I set up was similar to the first and I extended it by taking it up to the number 5.
I used the foam ghosts this time and drew round the wooden numbers so that each ghost had a number on it. I used a permanent marker pen to colour in the numbers so that they would not rub off and drew the corresponding number of circles on to each one so that Little “R” could place a glass pebble on to them as she counted to that number. 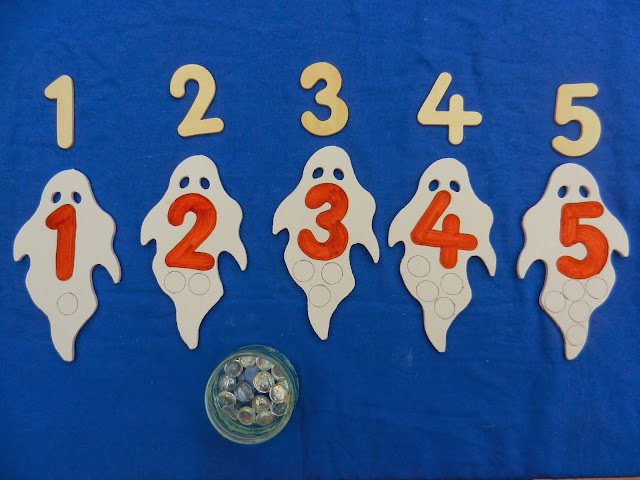 As we counted the pebbles out, Little “R” was able to relate the number on the Ghost with the number she had just counted. This was then reinforced further by matching the wooden number to the silhouette on the Ghost. 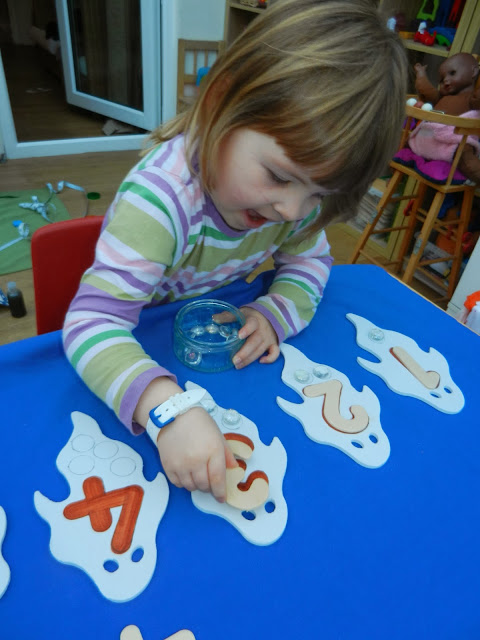 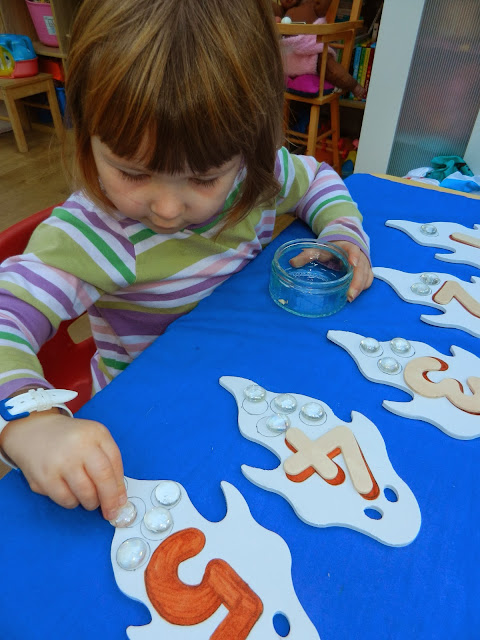 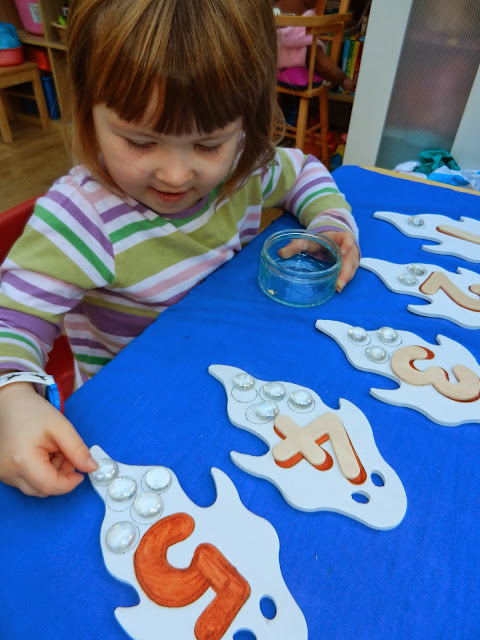 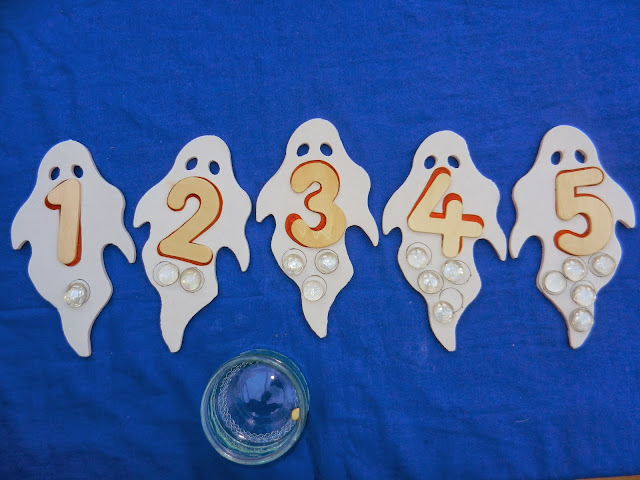 CHARACTERISTICS OF EFFECTIVE LEARNING:
This activity was set up to help the children count, number match and to also recognise numerals. This was offered as a fun puzzle type activity which linked in to our Halloween theme.

Little “R” was interested and motivated to give this a go. She didn’t recognise any number except for the 3 when we started. By the end of today she was able to recognise all numbers between 1 and 5. We will continue with these games throughout the week to help cement this in her memory. She was keen to keep trying and exploring the numbers. She woke up from her nap and could be heard counting from her bed and asked to do more counting once we came downstairs to play again. She showed great enjoyment in achieving her goal of completing each activity and came back to them frequently throughout the day.
Today’s play, meets the following EYFS Prime and specific areas