Second week of the holidays.
Today we played with our Playmobil Safari and vet set. This is always a big hit with the children. Kenzie spent a lot of his time making the people and animals do funny things. Little “R” turned it in to a Dr’s office and made the people look after each other.
“Don’t worry lady, The Dr will make you better” 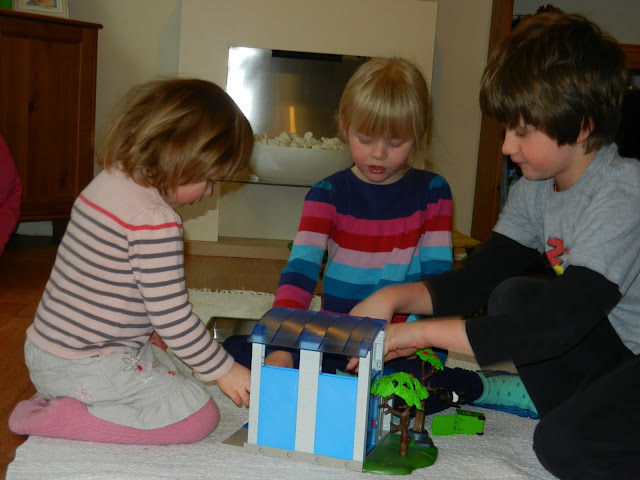 Brendan and Kenzie decided to make everyone a Banana smoothy. Added natural yoghurt  honey and cinemon too! Very yummy. They talked about what they could put in the smoothy and which flavours would go together. they did a great job! Very tasty! 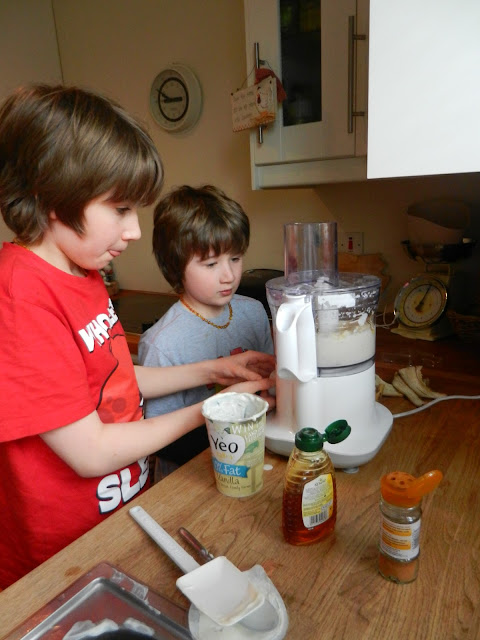 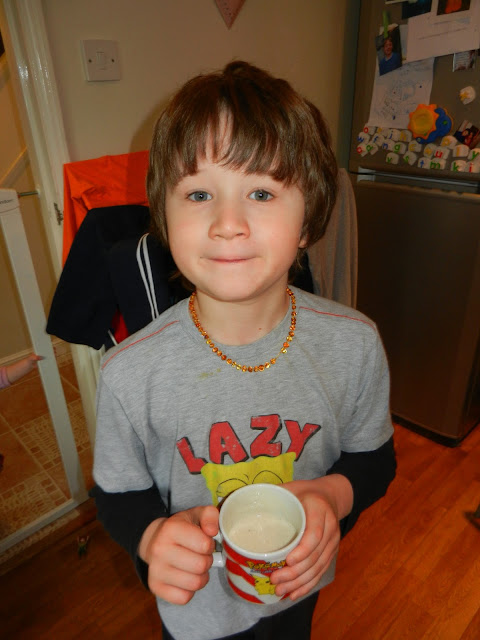 While some of the children played upstairs with the super heros and the toddlers played with Buddy bear and the tea set in the playroom, Brendan made a model of the Earth over the kitchen floor. He had a few “world in a bag” sets. London, New York, Paris and Germany. We found paper, fabric, towels and bits of cloth to make the the scene and then he added the city’s. 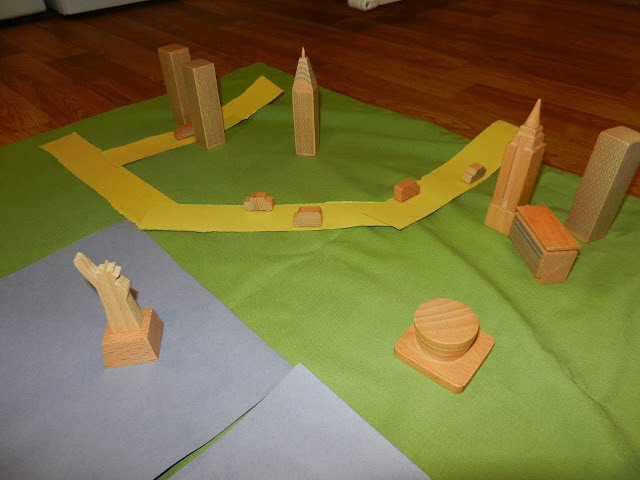 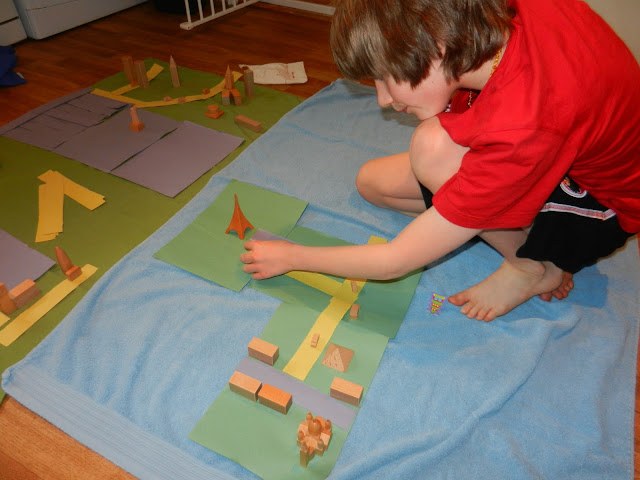 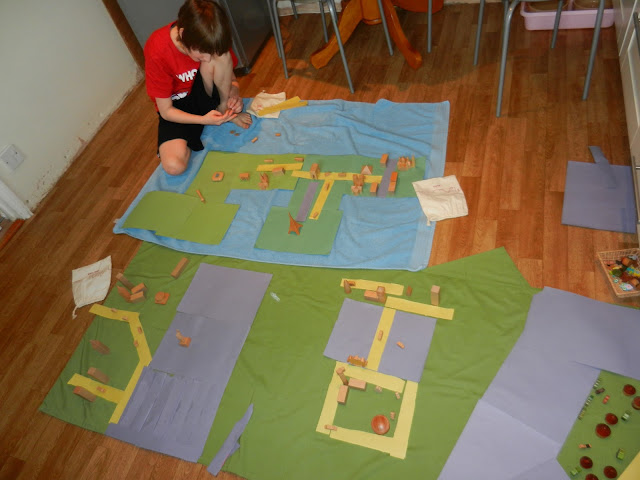 We talked about Paris. I could explain about some of the buildings because I had been there which made it a bit easier. I haven’t been to Germany so we didn’t recognise all of the buildings in the set. We decided it would be worth doing a Google search for German landmarks. Brendan quickly recognized one of the pieces as the Brandenburg Gate. He has asked about the Berlin wall before so this sparked more questions and he asked to look for You tube clips related to the night the wall fell.  I remember being a child and seeing it on the news. He was rally interested in all the old news clips and short films we found.
This led to him doing a street view walk about of Berlin. 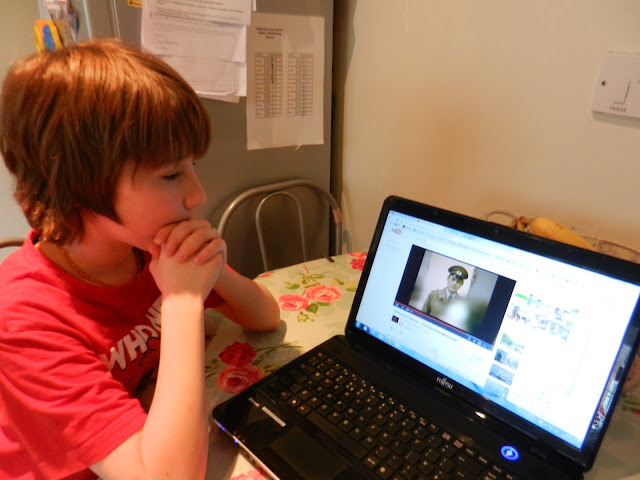 We somehow got on to talking about Barcelona and then the architecture and designs of Gaudi. I told him about my trip to Barcelona many years ago and how I love Gaudi’s Art. We looked at pictures of his buildings, mosaic designs and the Sagrada Familia.

Kenzie and the other children came downstairs and gathered up some big bits of paper, which they spread out over the playroom floor and started to draw and write stories. 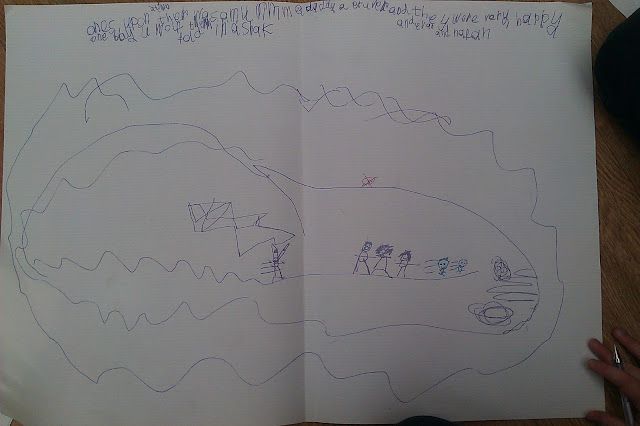 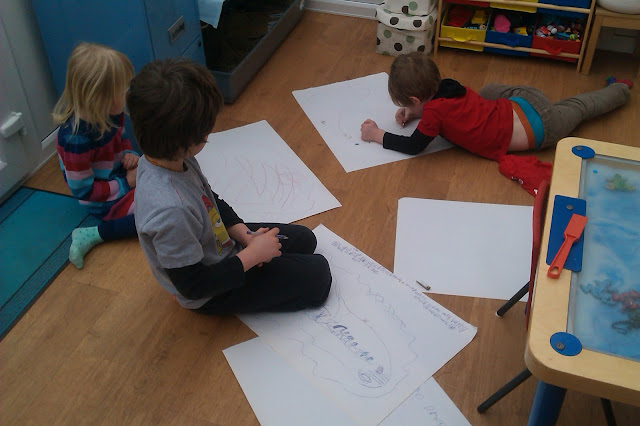 Little “R” chose to play with our little village set. She made all the dogs hide behind the bushes and I had to be one of the people looking for them. I had to call to the dogs and pretend I couldn’t find them. then she would laugh and say “here he is!” and make it jump out from behind the bush. 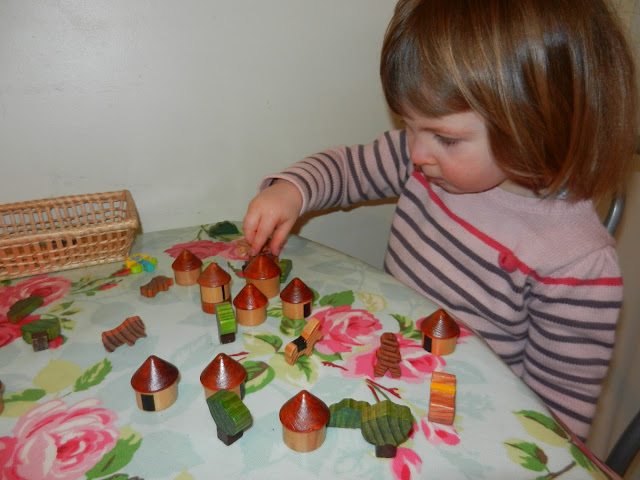 Due to me being off ill last week, we missed out on a lot of our Easter activities. I thought it might be nice to still do some of them. We are still in the Easter holidays so I guess it is still relevant!

We decorated some egg cups with porcelain paints. Each child chose how they wanted theirs to look.  Little “R” wrote her name over and over around the egg cup. I sounded out the letters and she drew a circle for each letter I said. She is showing so much interest in writing at the moment. All her marks have meaning behind them and she loves to tell you what she is thinking as she makes them. 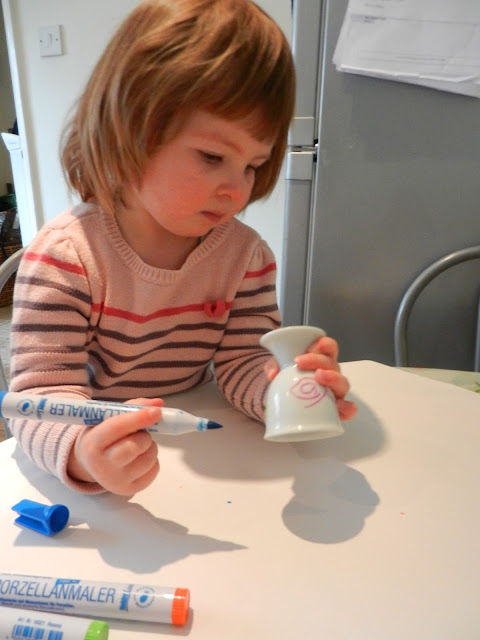 Little “L” focused on the colour names for each pen she picked up. She didn’t get them all correct but she did give each one a good try. She flipped between using a pincer grip for more detailed marks and a palmer grasp for bigger colouring. Like colouring in the inside of the egg cup. 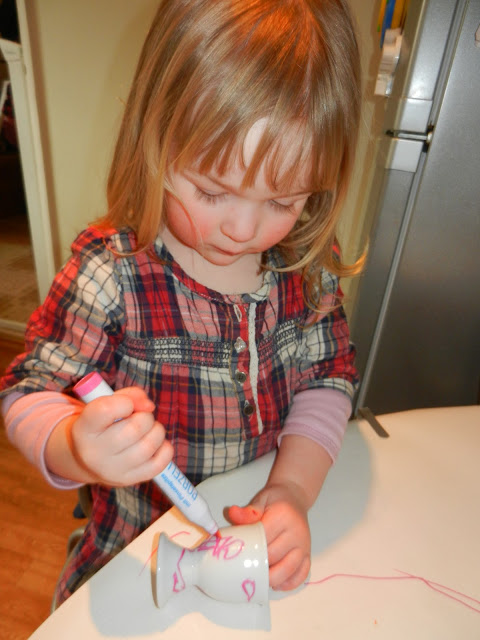 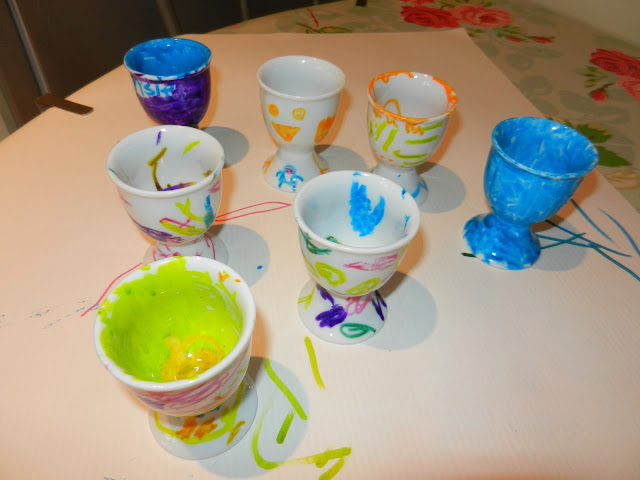 During nap time the older children had a little play on Lego Batman. This was chosen as an extension to the Superhero play that had been going on in the morning and the Batcave toy they had been playing with.
They all took it in turns to work in pairs. It required cooperation and working together to move around the screen and complete tasks. They also set a timer for 10 minute intervals and swapped each time the timer went off. No arguments at all and they re-set it each time.
We also did some Easter scratch art. This is always a favourite of the children in my setting and they always enjoy trying to work out how the colours suddenly appear.
Little “R” and I talked about spirals and she tried to copy the one I did on her egg. She made more circle marks while saying letter sounds. 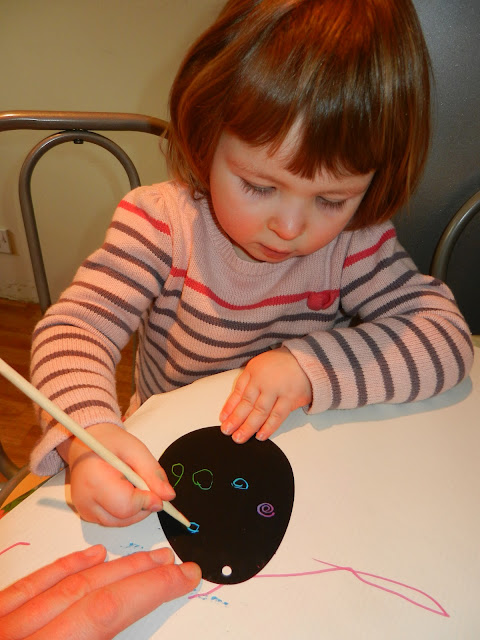 Brendan made his in to a pattern which I believe I have seen on many Easter eggs. He put his own spin on it. 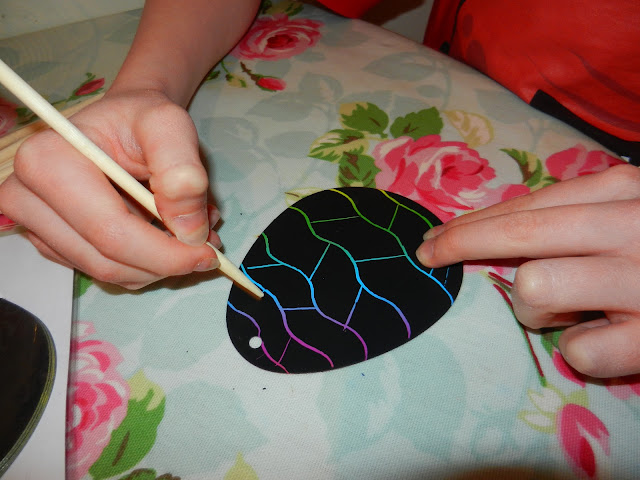 Little “L” was not really sure what to do and needed me to make a few marks on her egg before she was willing to give it a go. She soon realized she could make the colours appear and that encouraged her to keep trying. I think she found it a bit tricky to push down the stick and move it over the egg at the same time. 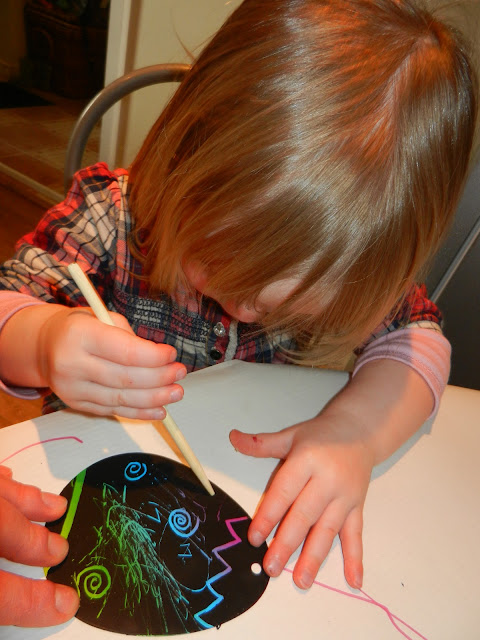 Little “E” made very small circles and squares on his egg. Lots of intricate marks. He kept looking at the end of the stick. I think he was trying to work out how the colours were being made. 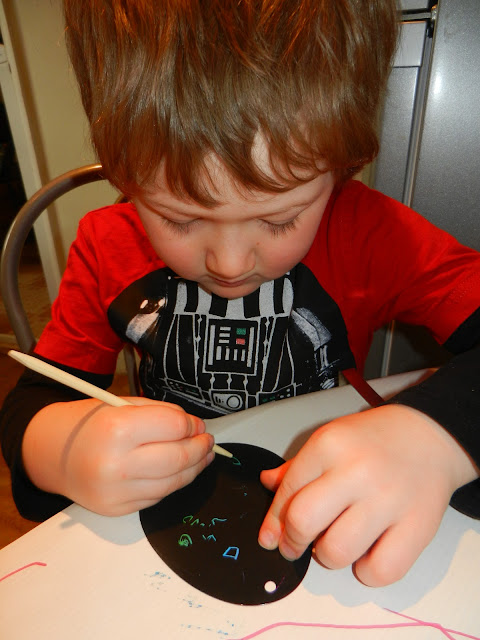 Our other Little “E” enjoyed making big bold marks across her egg and then colouring in the different sections. 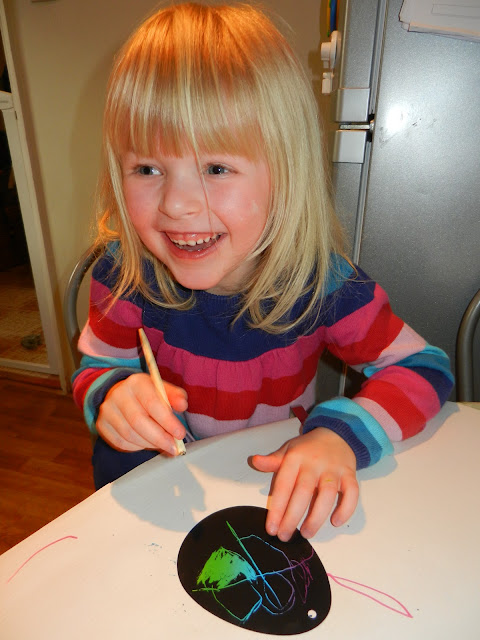 Brendan finished his off with lots of “B” for Brendan’s! 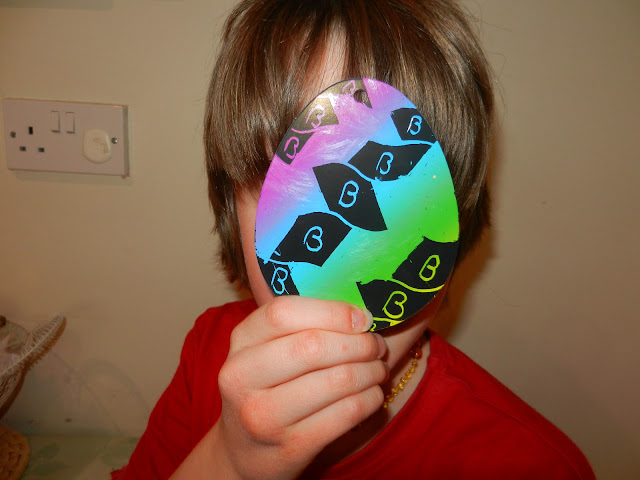 Kenzie put the stick to the egg very quickly with no real thought to the marks that were being made or the pattern that was being created. He was very excited to see I had bought these and just wanted to see the colours come through. He told me there was colour in the sticks. I explained to him how it really worked and showed him the black bits on the table that had been scraped off. He seemed amazed to find out what was really happening  At one point before my explanation he said he needed a new stick. He thought it was running out!  Bless him! 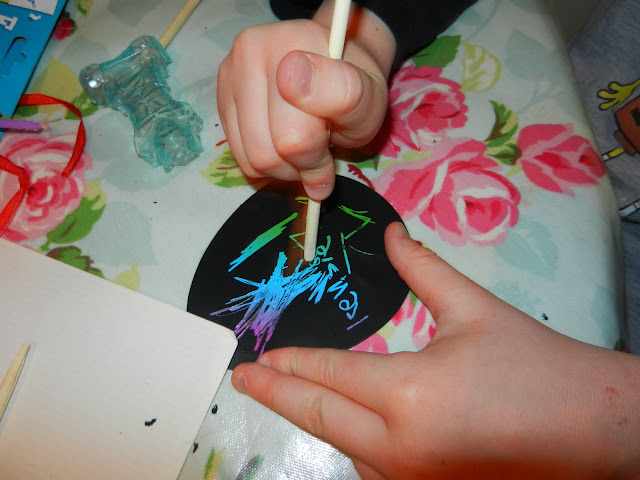 Little “N” wrote on his and did lots of zig zags! 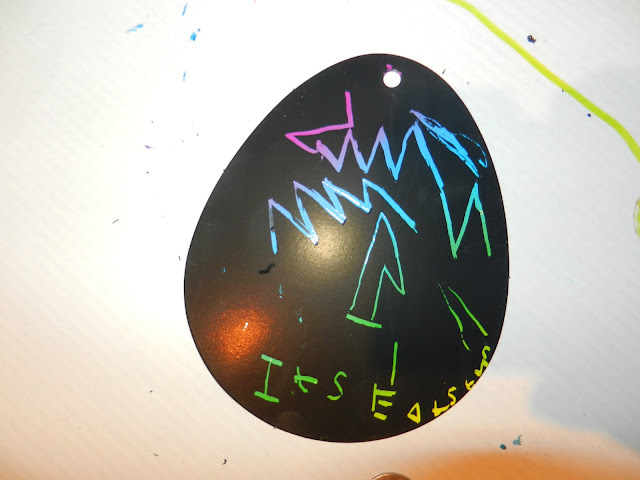 LAST OF OUR JUBILEE FUN AND MORE!!