We were very lucky today to wake up to a white blanket of snow. So far we have missed out when all around us have had some. Needless to say everyone was very excited!
As soon as the children arrived this morning we went outside and enjoyed playing in it. Little “Es” spent time using items from the outdoor kitchen to move the snow around and pick it up. She also bent down and picked up handfuls of snow. She moved it from place to place in different ways. 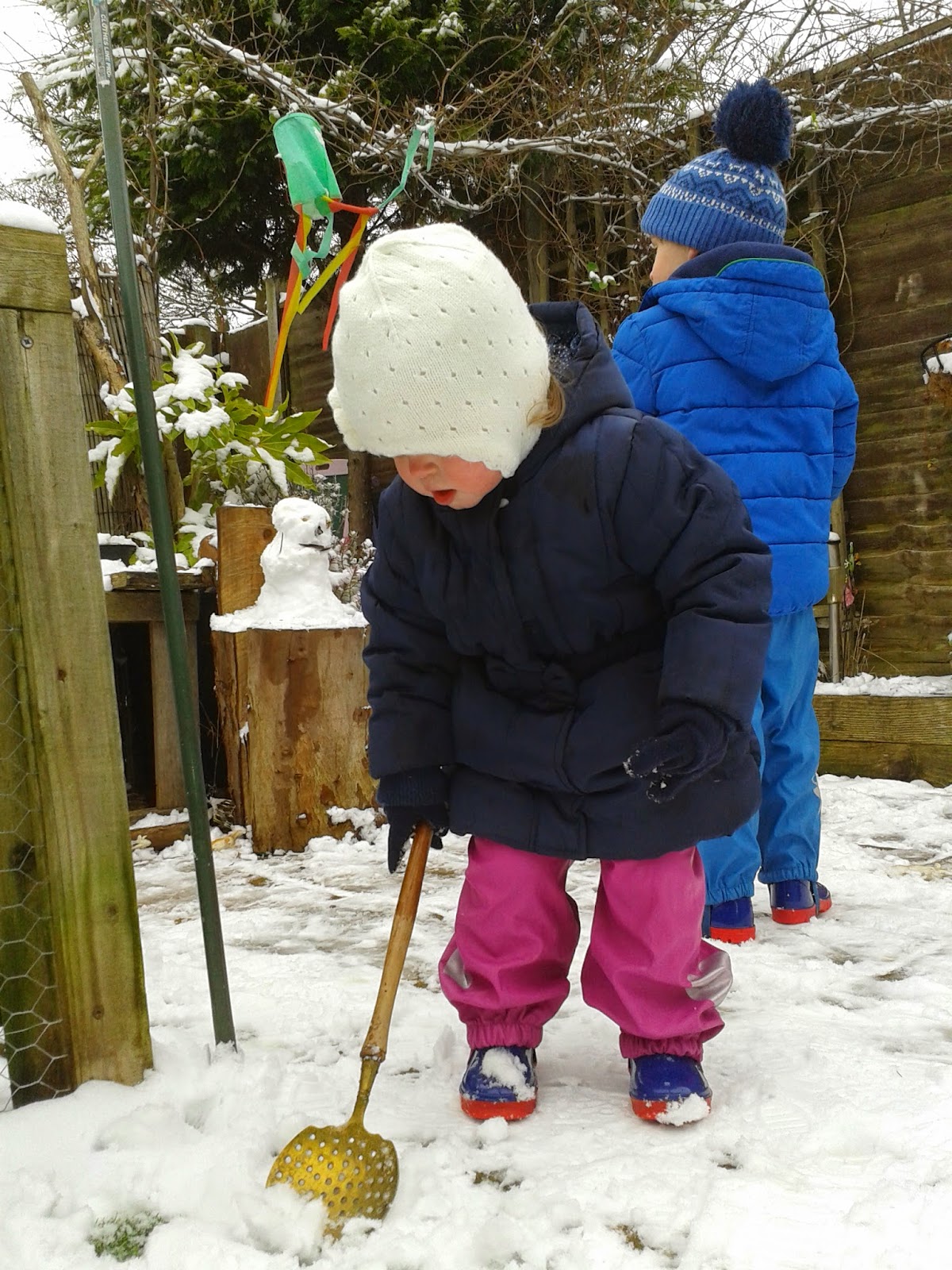 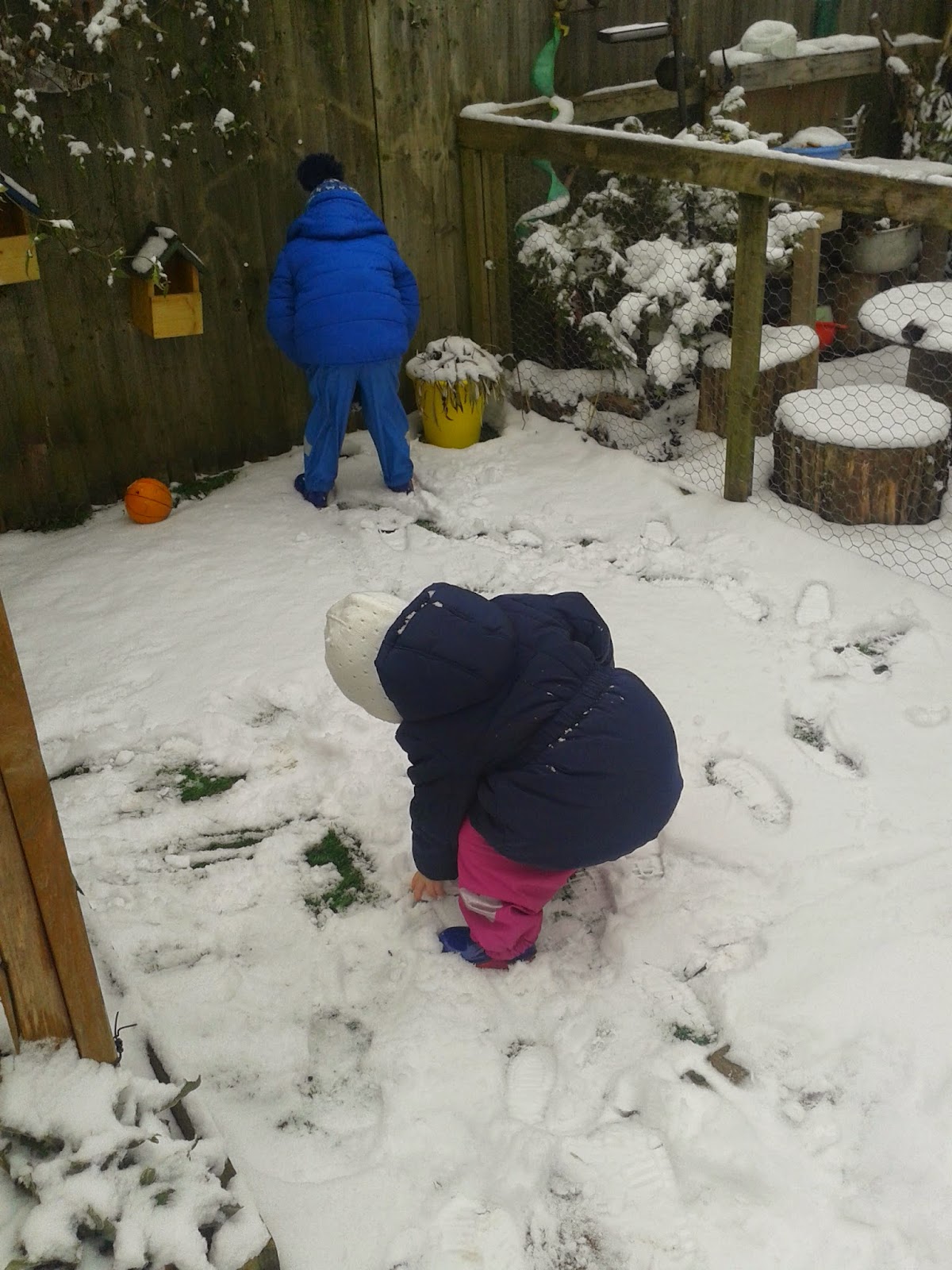 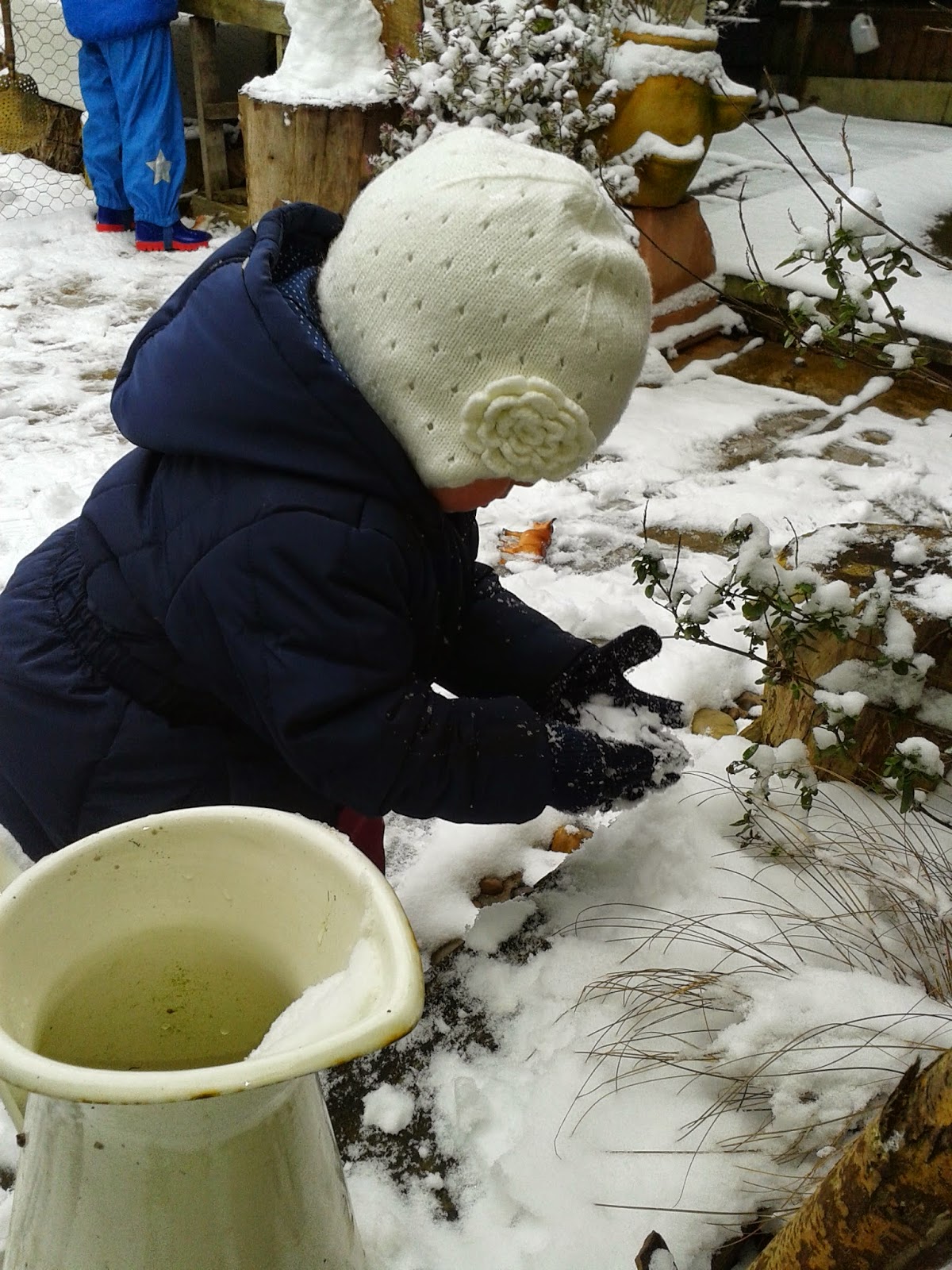 Little “M” kept saying “Told!” (cold) when she touched the snow. This is the first time she has seen it and was very interested in this new cold white stuff that everyone was so excited about! It must be amazing to have so many new things yet to experience and be excited about!! 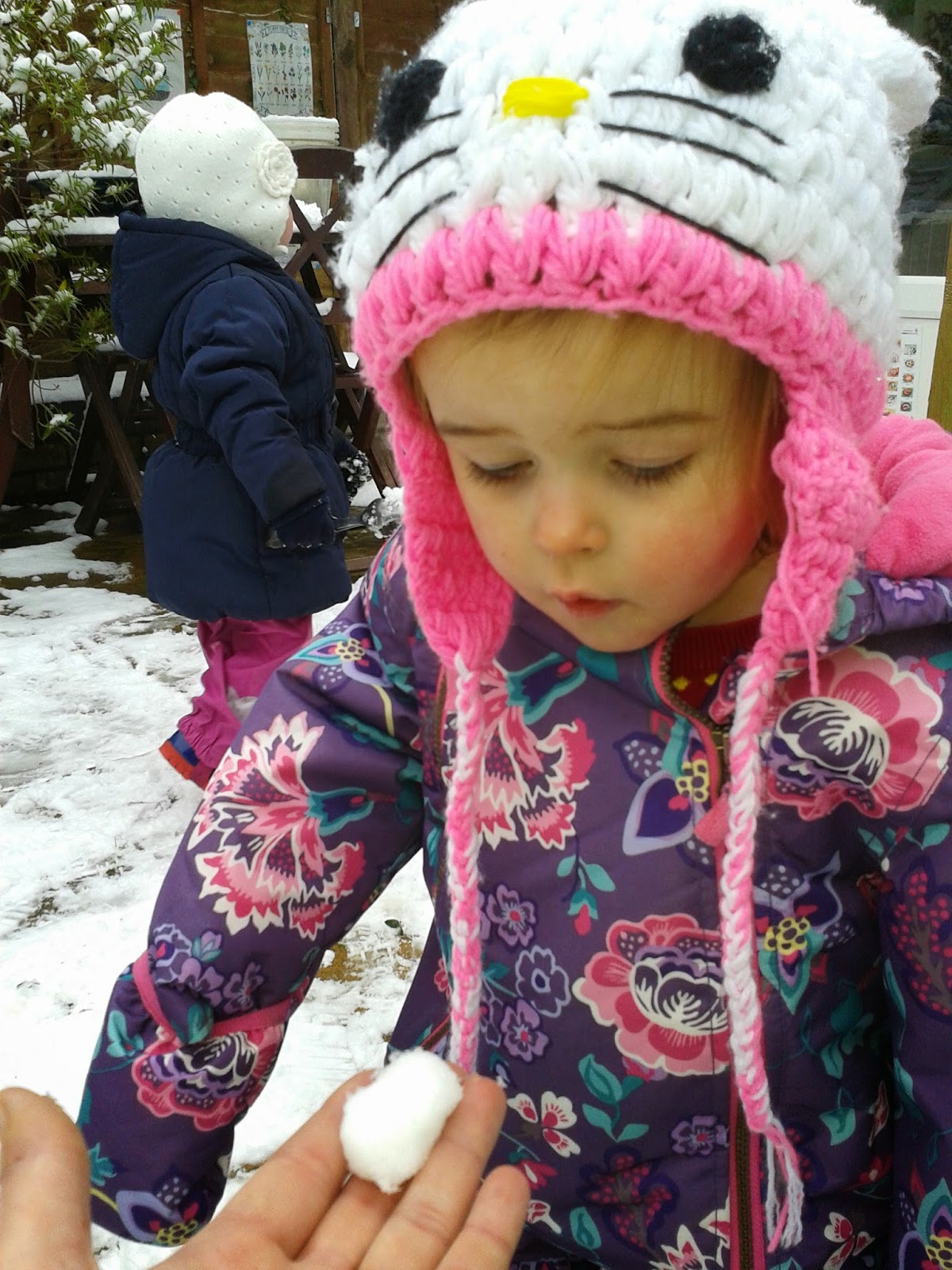 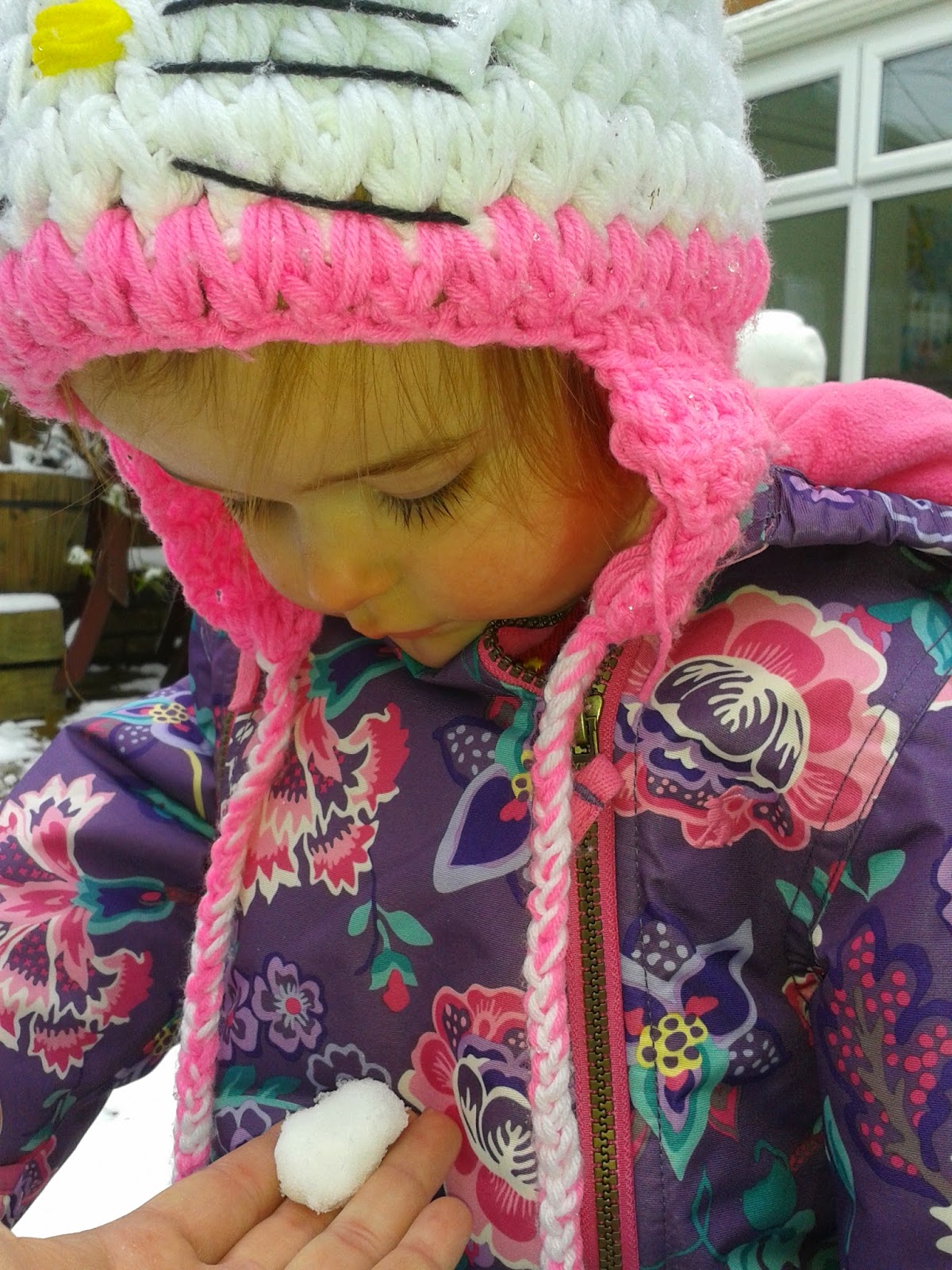 The animals in the herb garden were walked around in the snow. Making  foot prints and marks as they went. 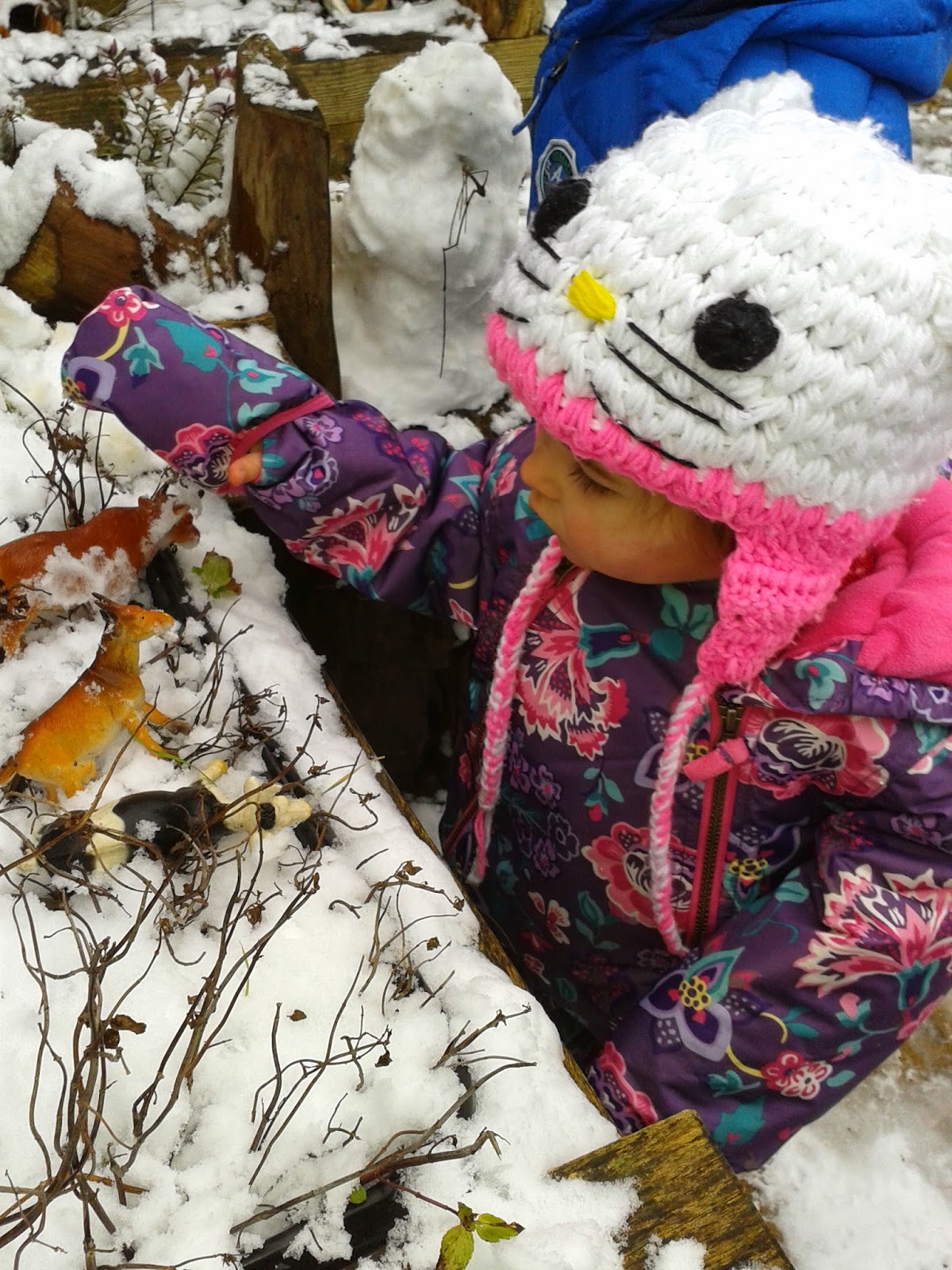 “X” had fun pushing the snow off things and touching items in the garden to see if the snow stayed on or fell. He span the windmill and watched as the snow slid off each paddle. 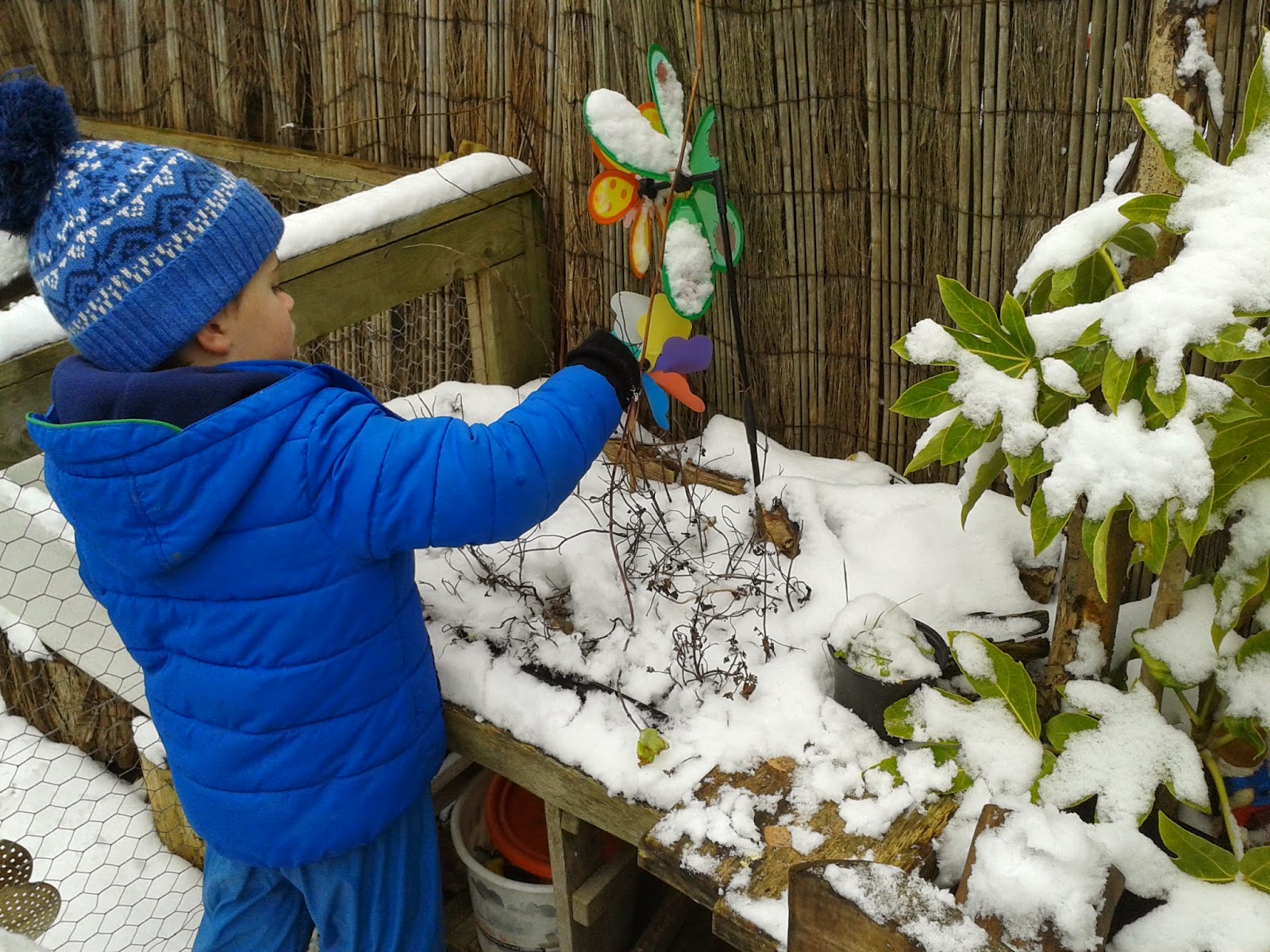 He asked to make a snowman. We talked about how big we thought it would be and decided that we had not enough snow to make a big one but we could make a small one. He also thought it best to make it on the log chair so that it didn’t get stood on. 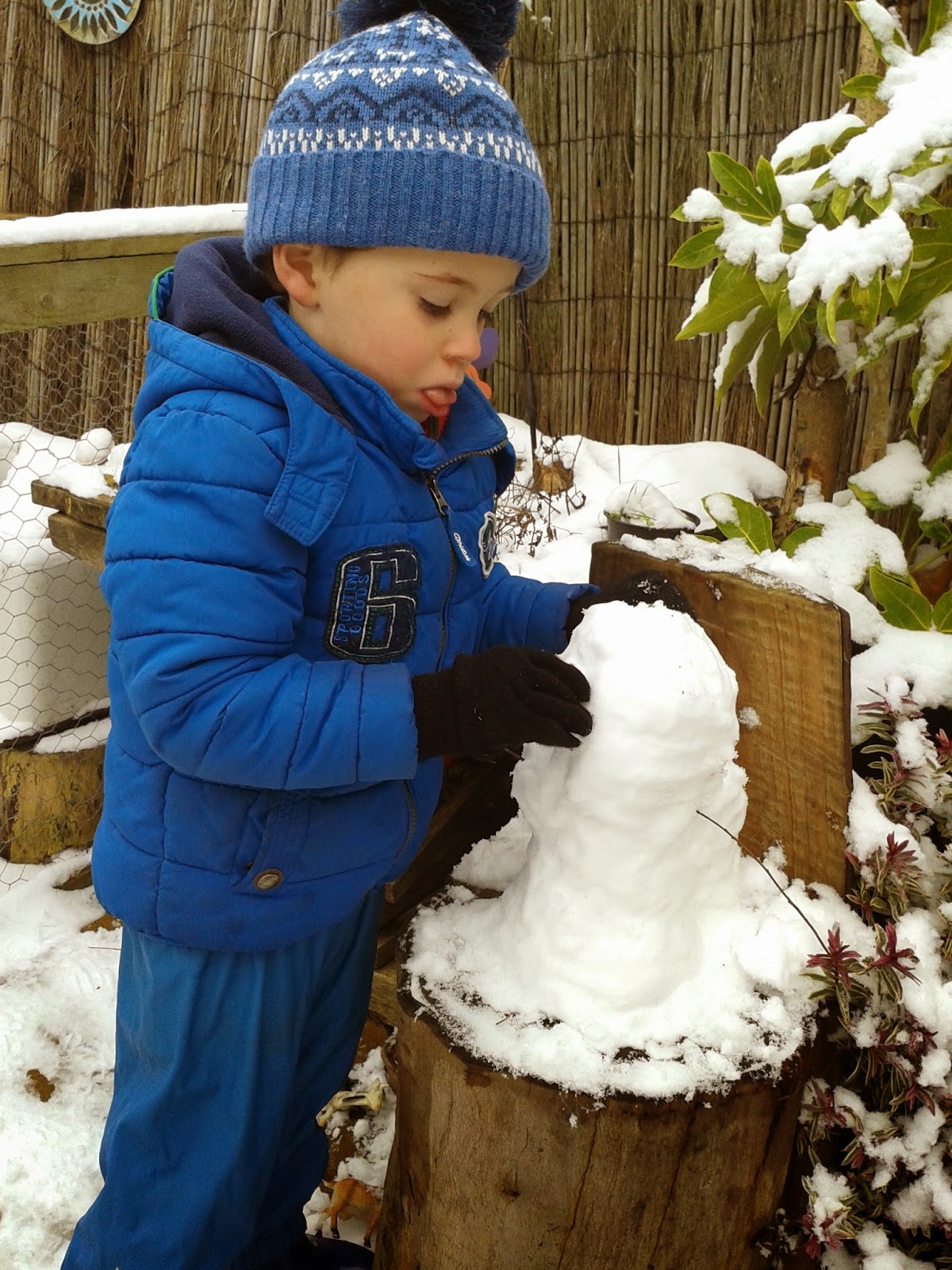 We had a lot of conversations about what we could use for the face and arms. “X” went on a hunt around the garden to see if he could find stones and sticks under the snow.

We also had many, MANY snowball fights! “X” really improved his aim after a few throws and managed to get me several times! He laughed and ran to hide every time I picked up the snow and then jumped out at me to throw one that he had made in his safe space! One snowball had a stone in and thankfully it hit the fence. This led to a conversation about safety and how we had to check the snow we were throwing. 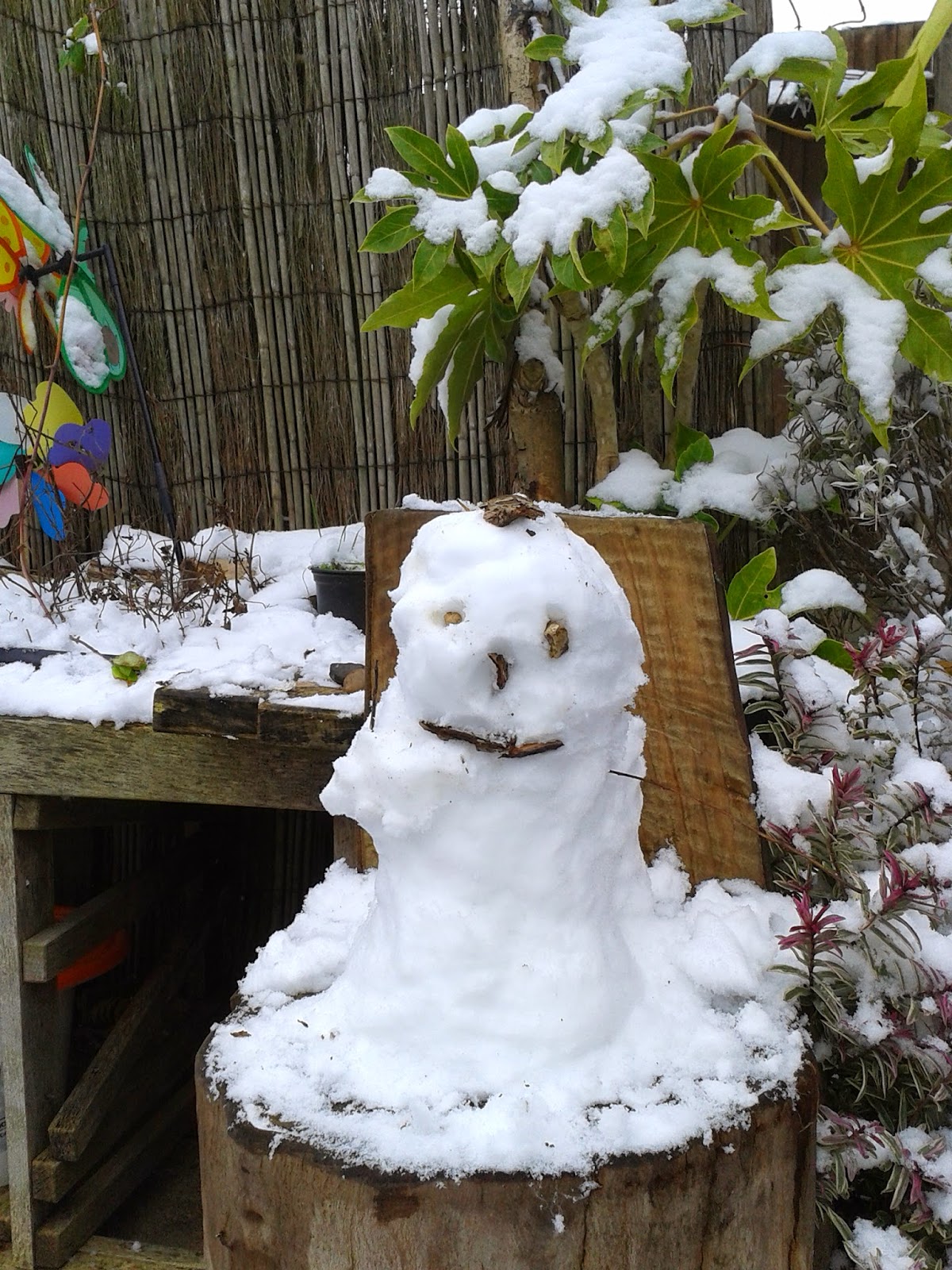 LEARNING INTENTIONS AND IDEAS FOR EXTENDING LEARNING:
NEXT STEPS:
CHARACTERISTICS OF EFFECTIVE LEARNING:
Little “Es”  showed high levels of interest and enjoyment in this activity. The snow was new and exciting for her and she enjoyed holding it and moving it around the garden. She often moves things around in bags and buggies and seems to have a Transporting schema forming. She used tools to help her lift and move the snow.

Little “X” was very focused in this activity and wanted to make his snowman like his picture last week. He remembered the parts that a snowman needs and looked around for things that would be suitable. He was using previous knowledge and understanding to complete this task and adapting things if they did not work. He took part in a snowbank fight and used turn taking to make the fight fair. He realized the danger that stones could create if they got caught up in the snow and was careful to choose a good spot to make the snowballs.
Little “M” was experiencing snow for the first time and her mum had shared a video clip of her watching the snow falling, with me. She can now say snow and spent most of her time relating new words to it.” cold, wet and snow”. She understood the signs her body gave her to know she was cold and wanted to go inside. She asked me to open the door. She told me she was cold and started to try and pull her boots off. Once she was warm again she stood at the playroom door and pointed at the snow. Repeating the new words she had learnt.
Today’s play, meets the following EYFS Prime and specific areas:

HOW TO MAKE…… WINTER PAINTINGS