I have recently been approached to review some toys for Early Years Resources and we were all very excited to be able to try out their EYR Rustic Play Blocks. When the box arrived it was my own, older children that had the pleasure of opening it. There was a lovely smell of fresh wood and each block had been sanded off to have smooth edges. They still had their rustic look which was lovely as so many blocks are finished to perfection. These have little knots and marks on them.
My boys enjoyed building with them for quite some time and commented on the size of them. They found them better for building with than the usual building blocks you can buy.
Monday morning came and I lay them out with some other loose parts to see what the children would do with them.
The first child called her mum in to see the “New toys” before she left for work. She sat with the blocks and built a road and garage for the cars that she took from the shelving unit. She spent a good half hour playing with the blocks and cars. Making long straight roads and bridges for the cars to drive along. 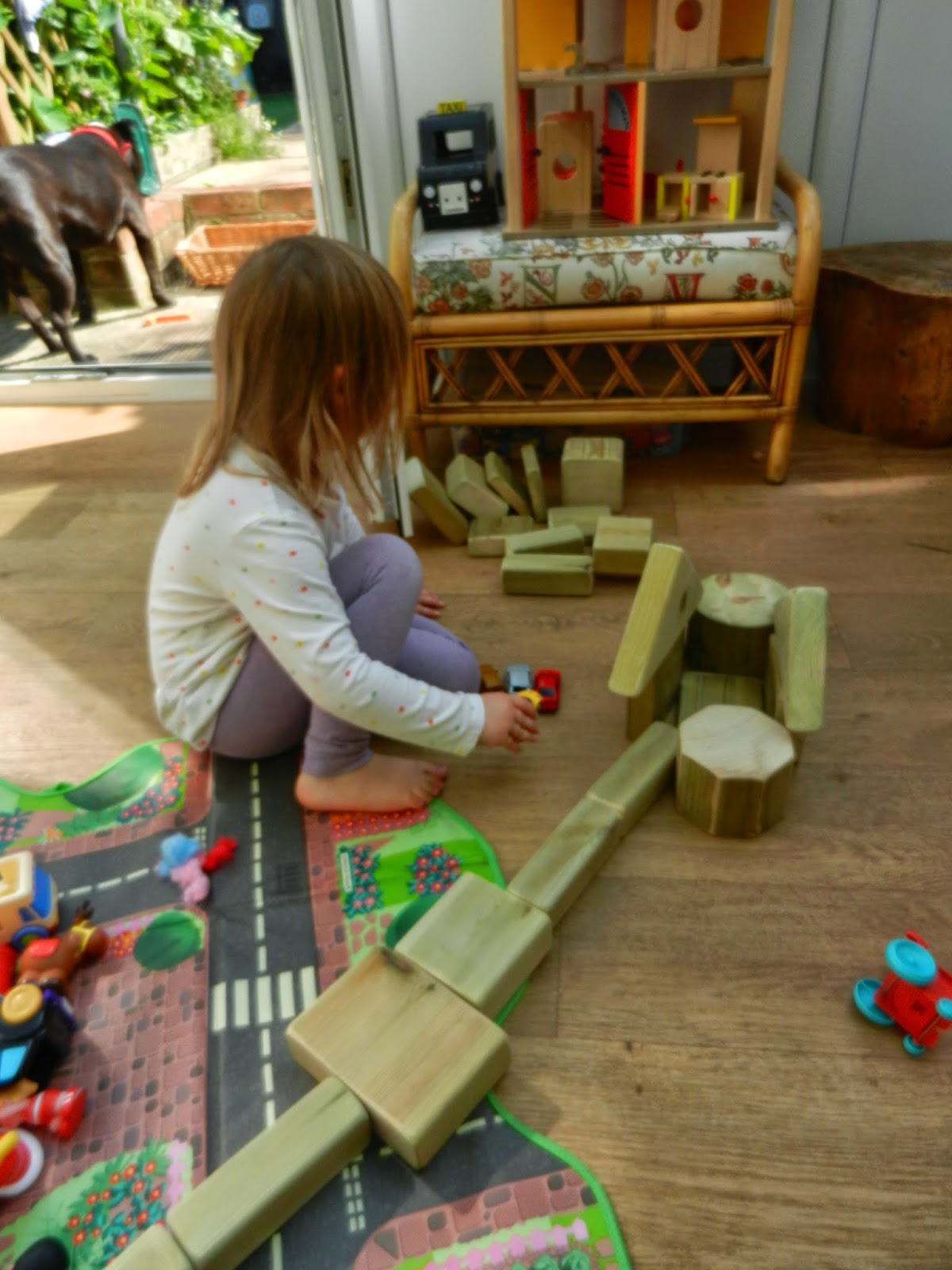 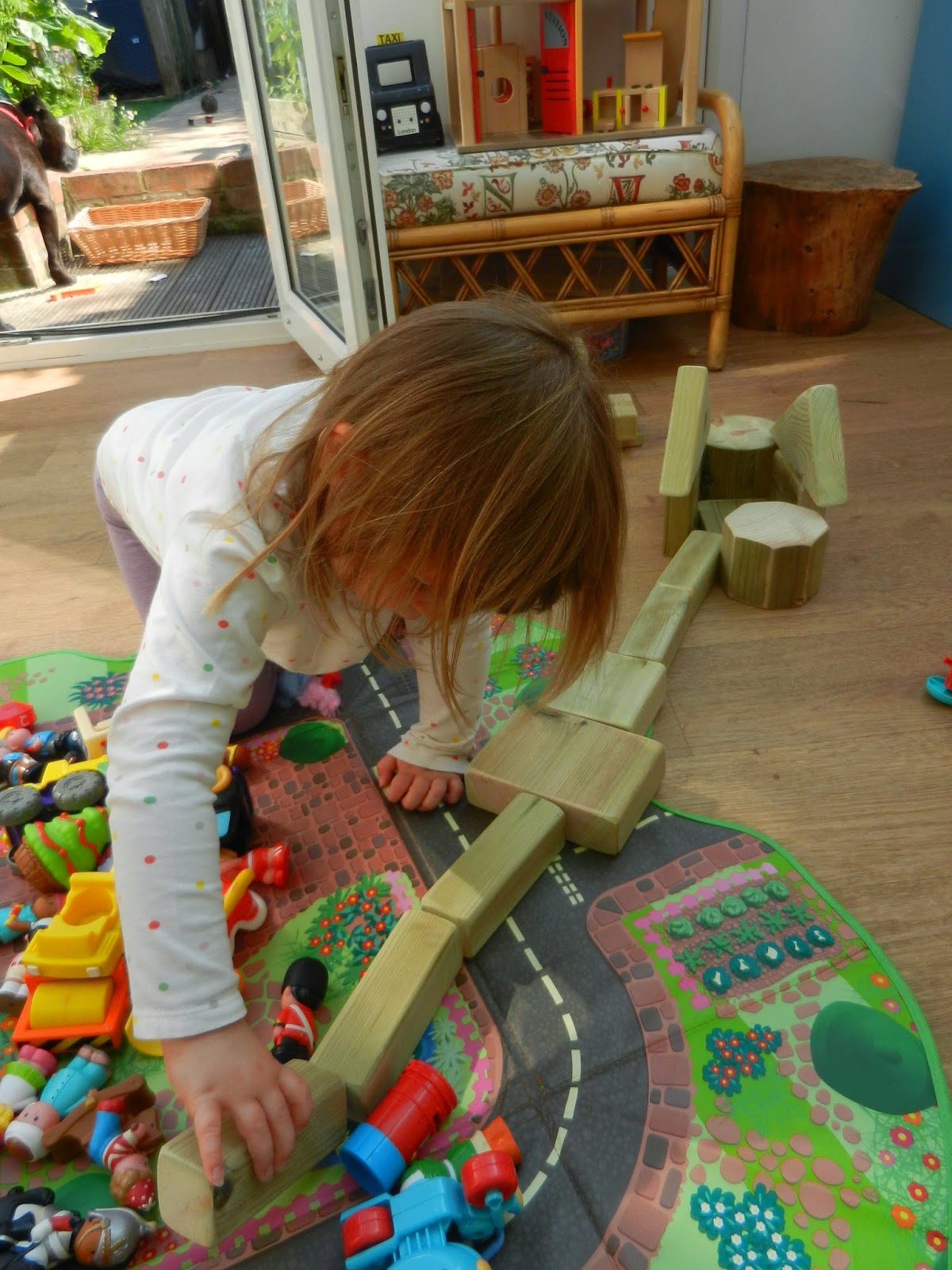 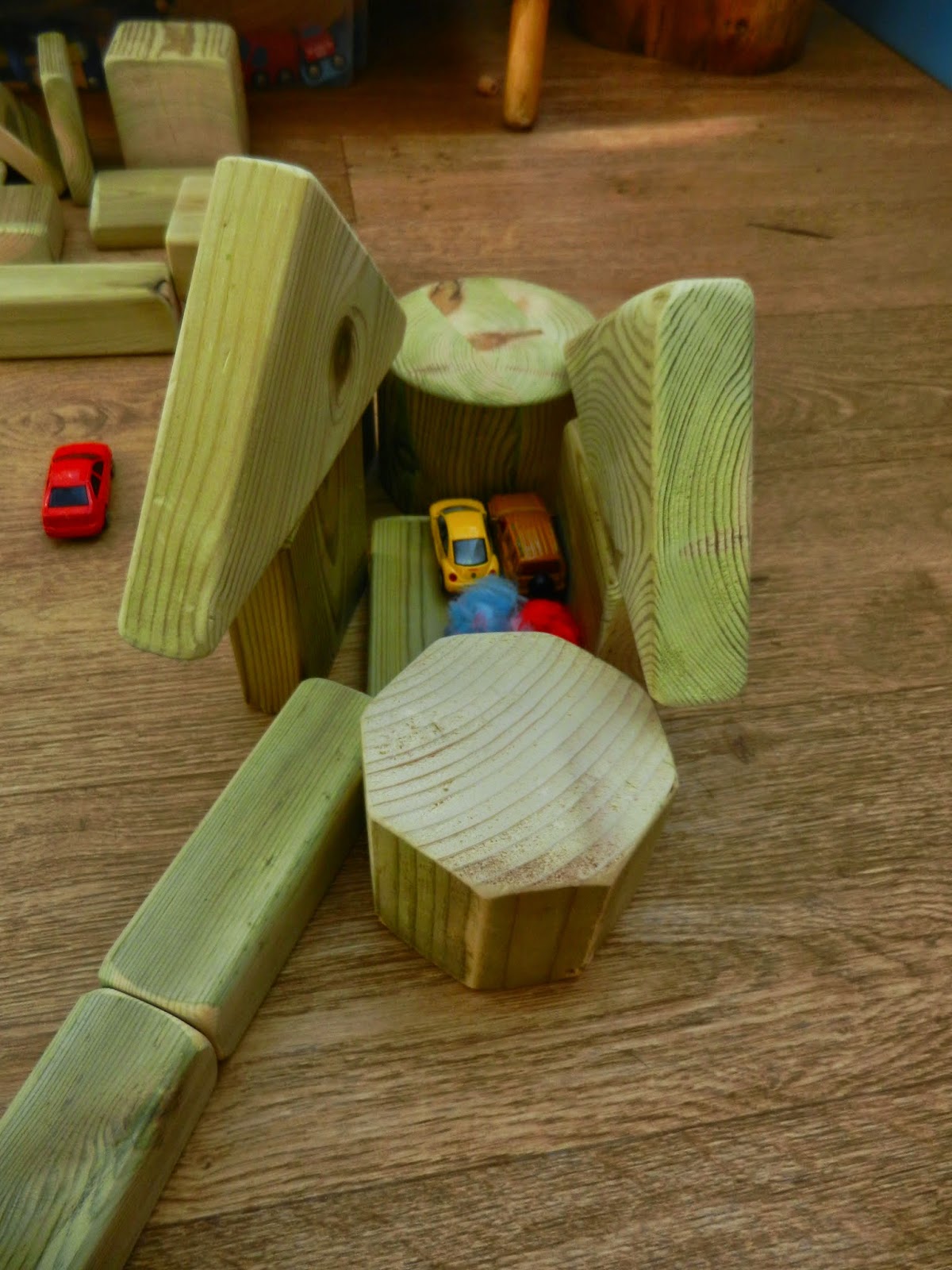 After some time she told me she was going to make a chair to sit on. She has not been able to build like this with our smaller blocks and she had a wonderful time making something that she could sit on. She carefully stacked the blocks, making them balance. 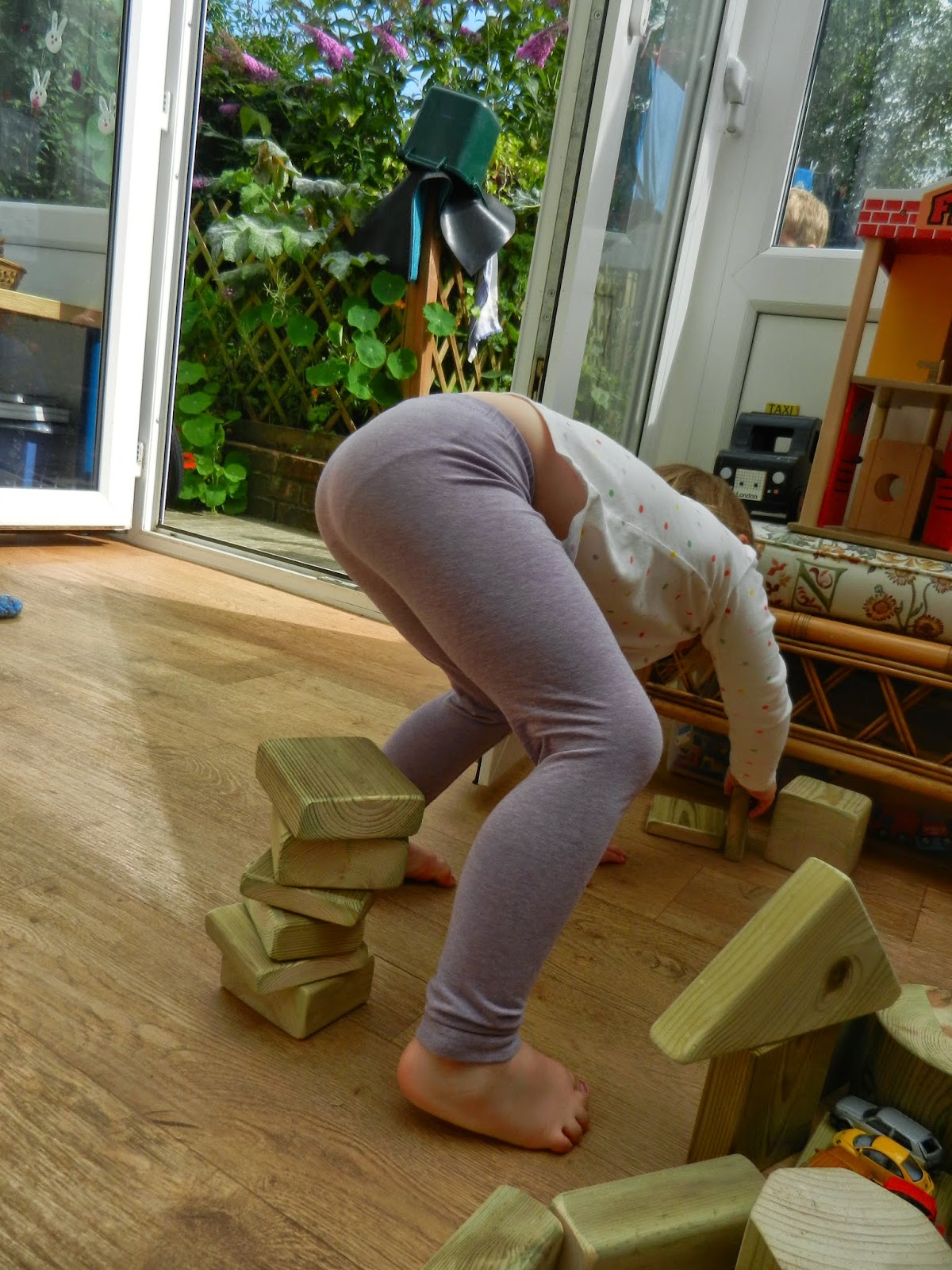 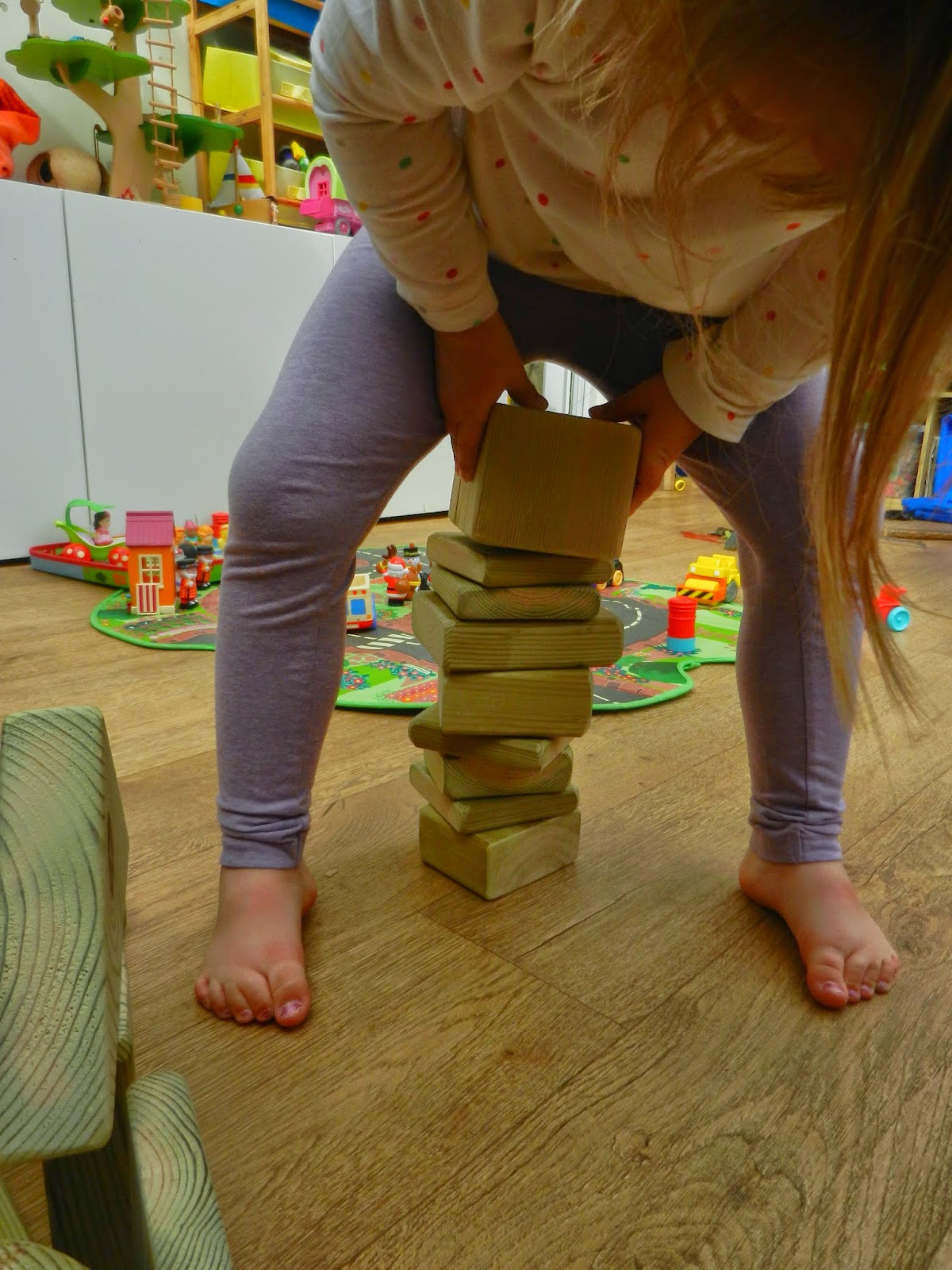 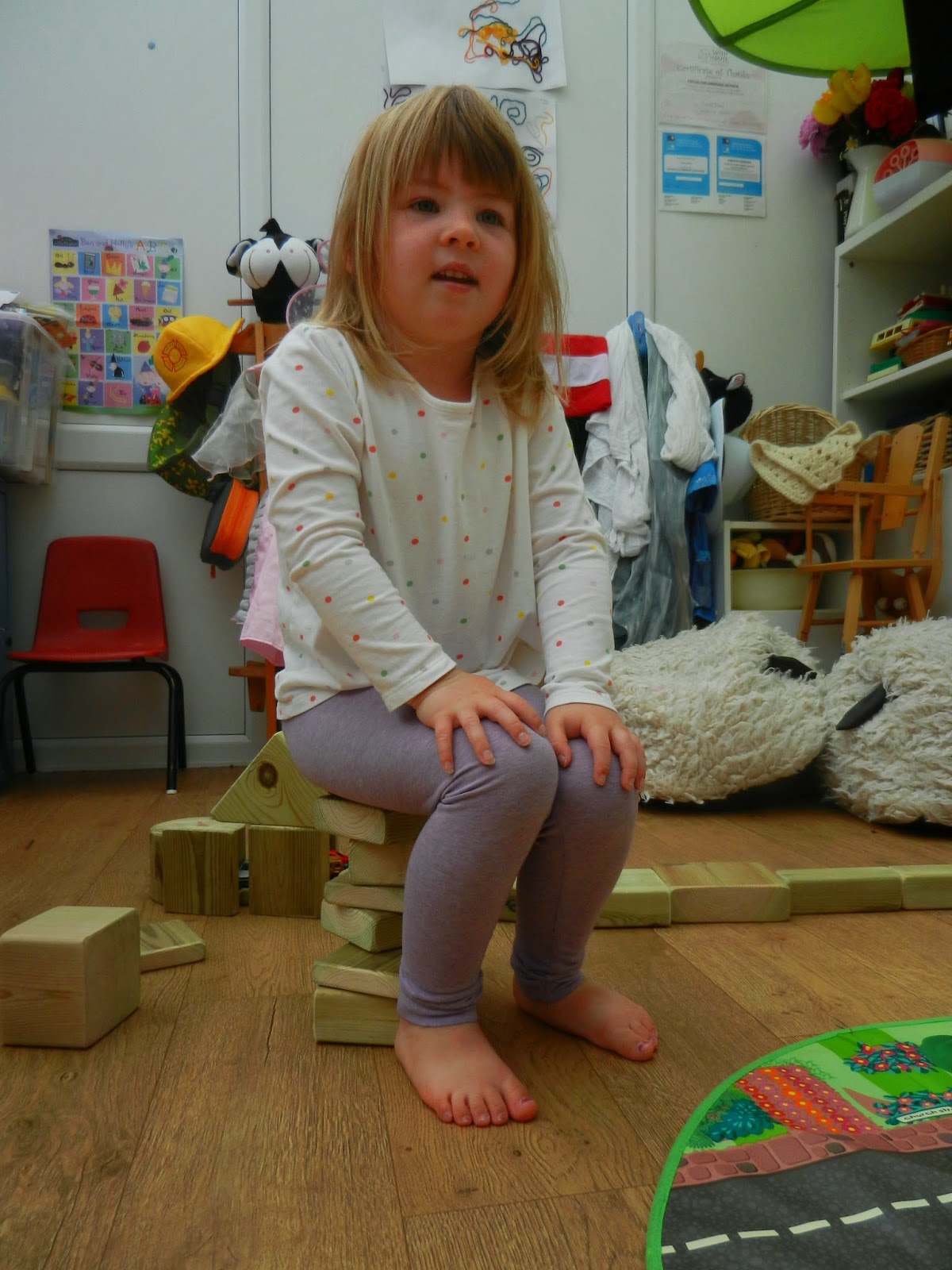 Little “X” arrived a bit later in the day and he also focused on the cool new blocks! He made a nest for his Eagle and filled it with bugs and reptiles. He told me he had made a house for his animals. 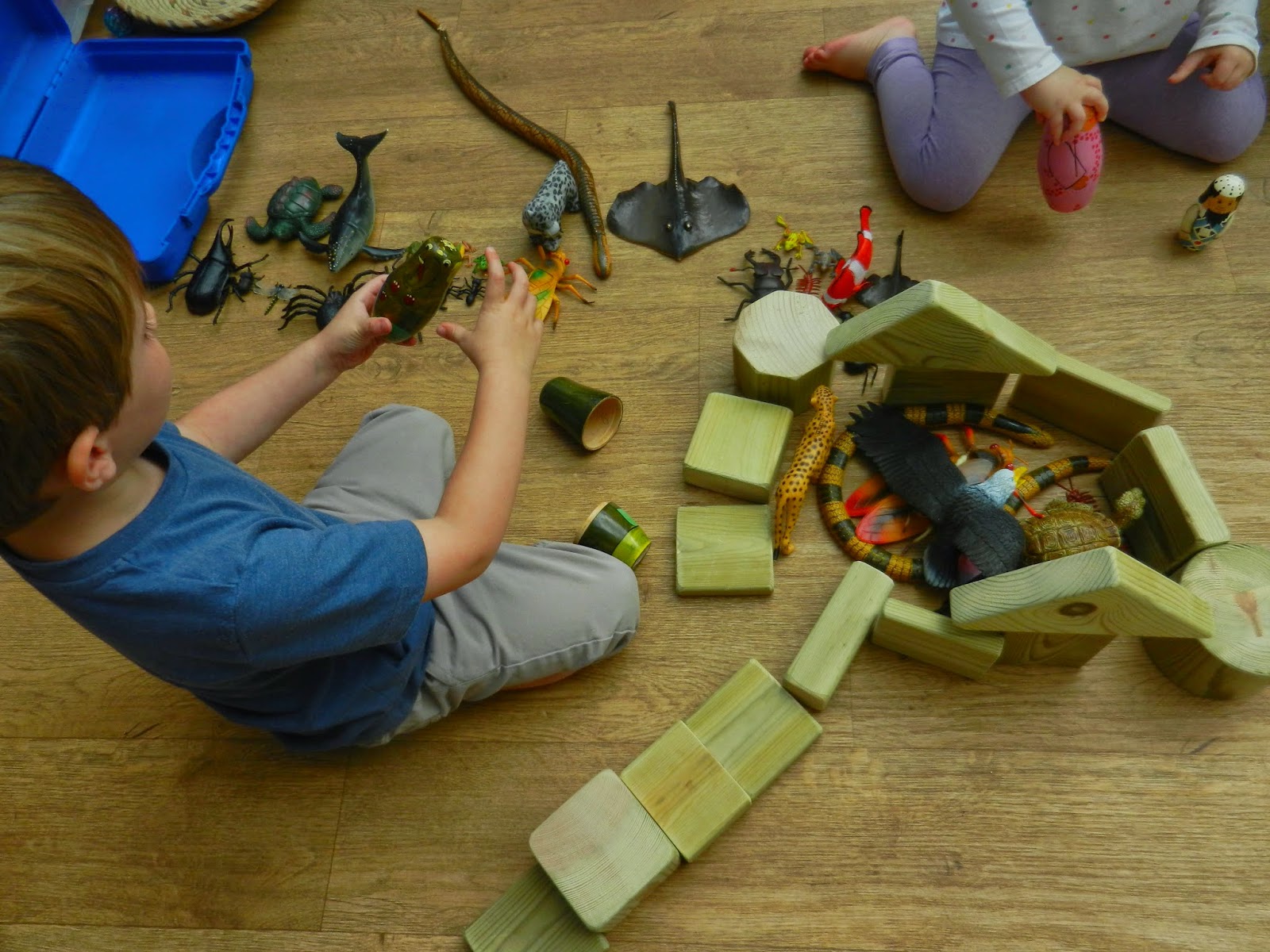 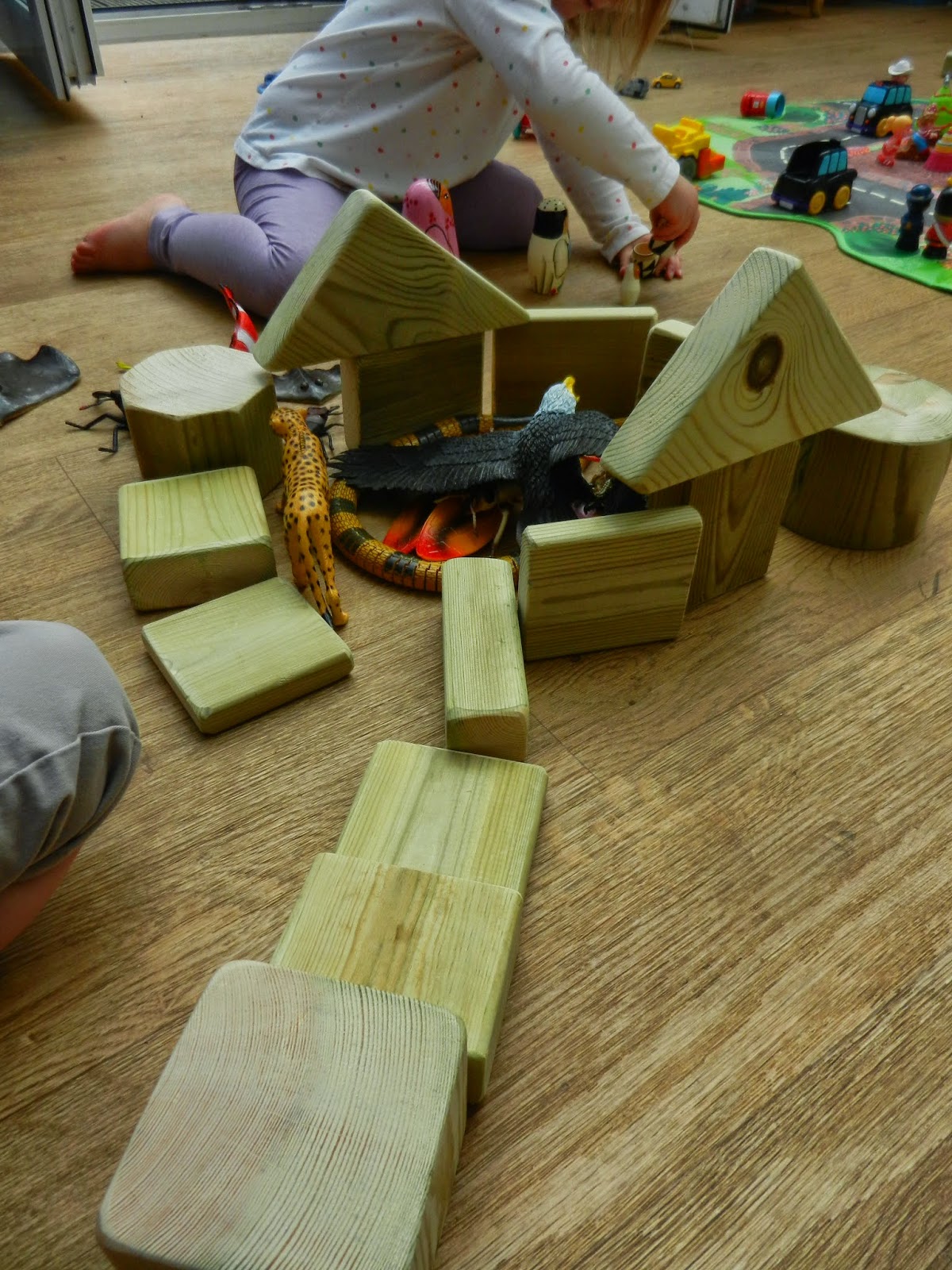 Later in the week I brought the train track out and again, the blocks were included and used to extend their play experience.  I came in from cooking dinner, to find this being built in the playroom.  The children also stacked the blocks up next to their bridge,s to make steps so that people could cross the railway tracks safely! 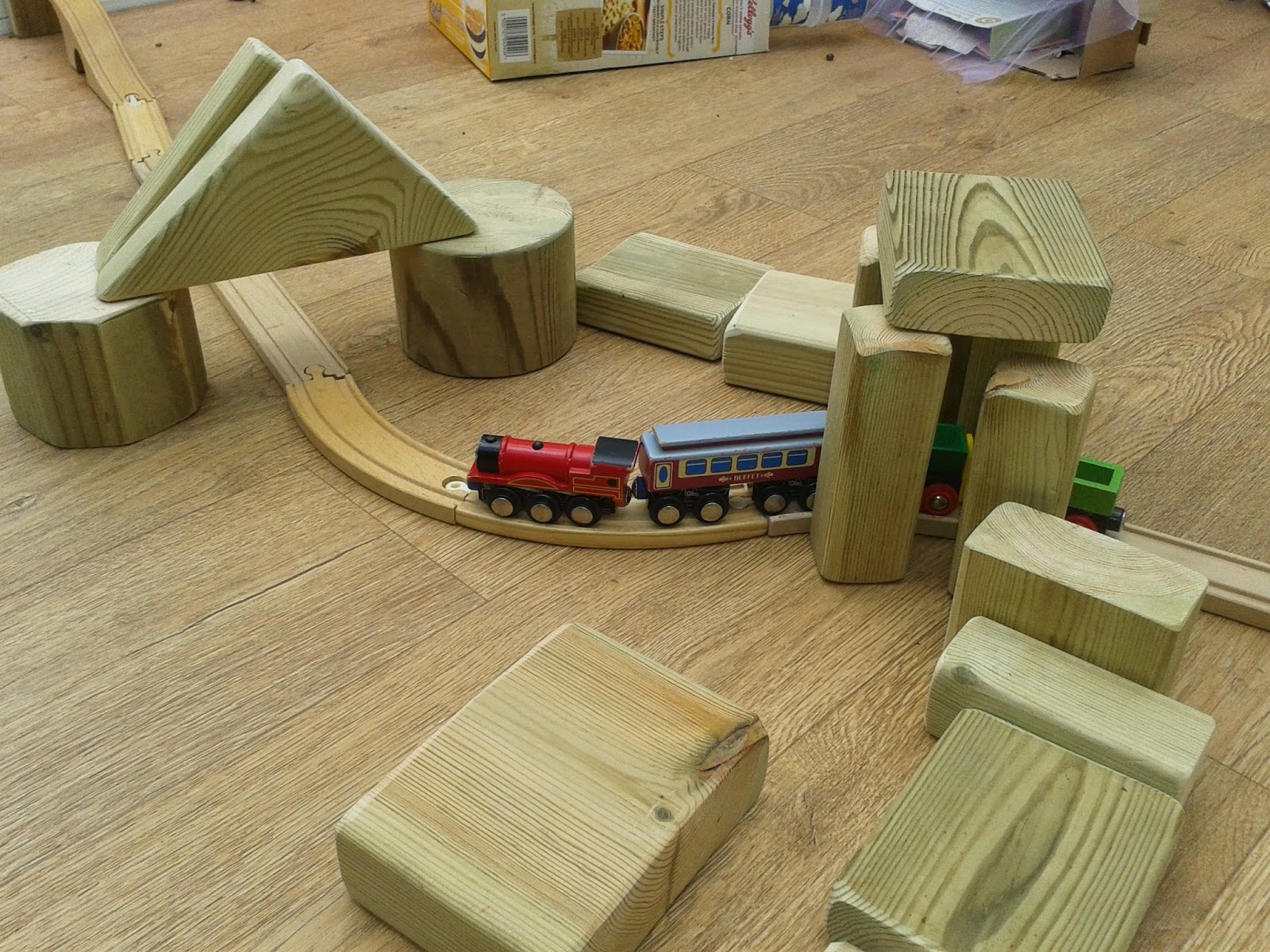 I like how they have also been used to make bridge supports! 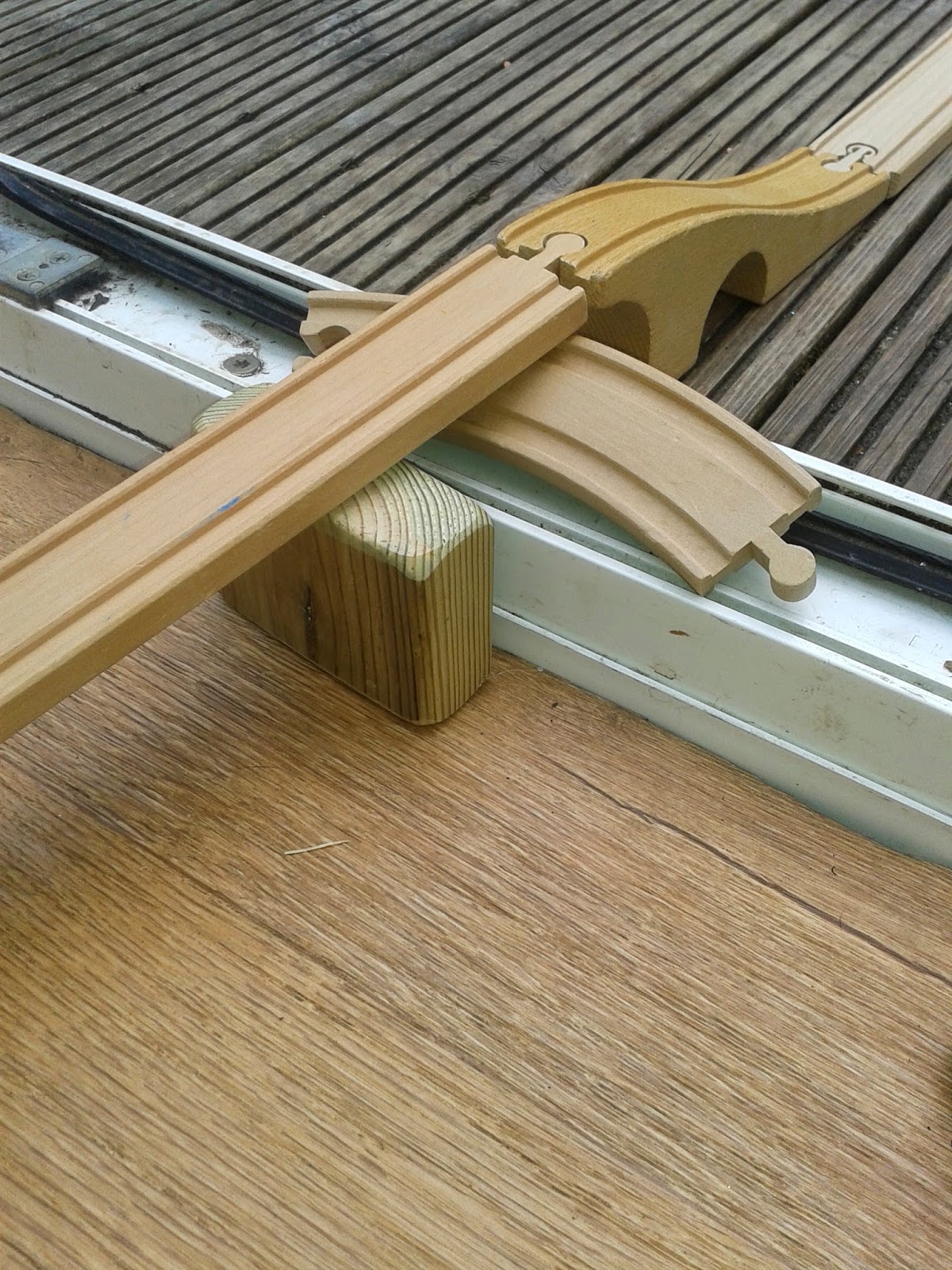 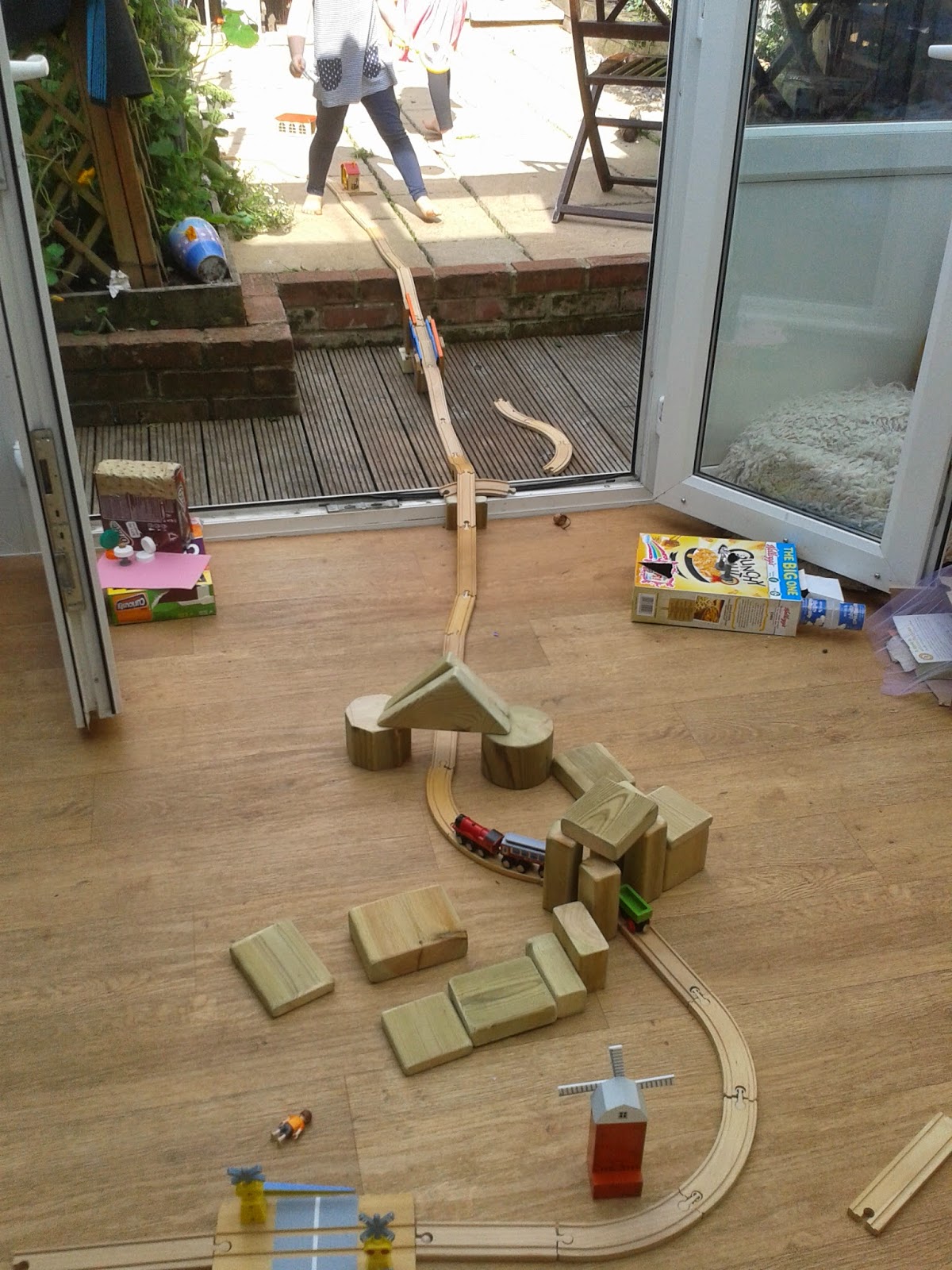 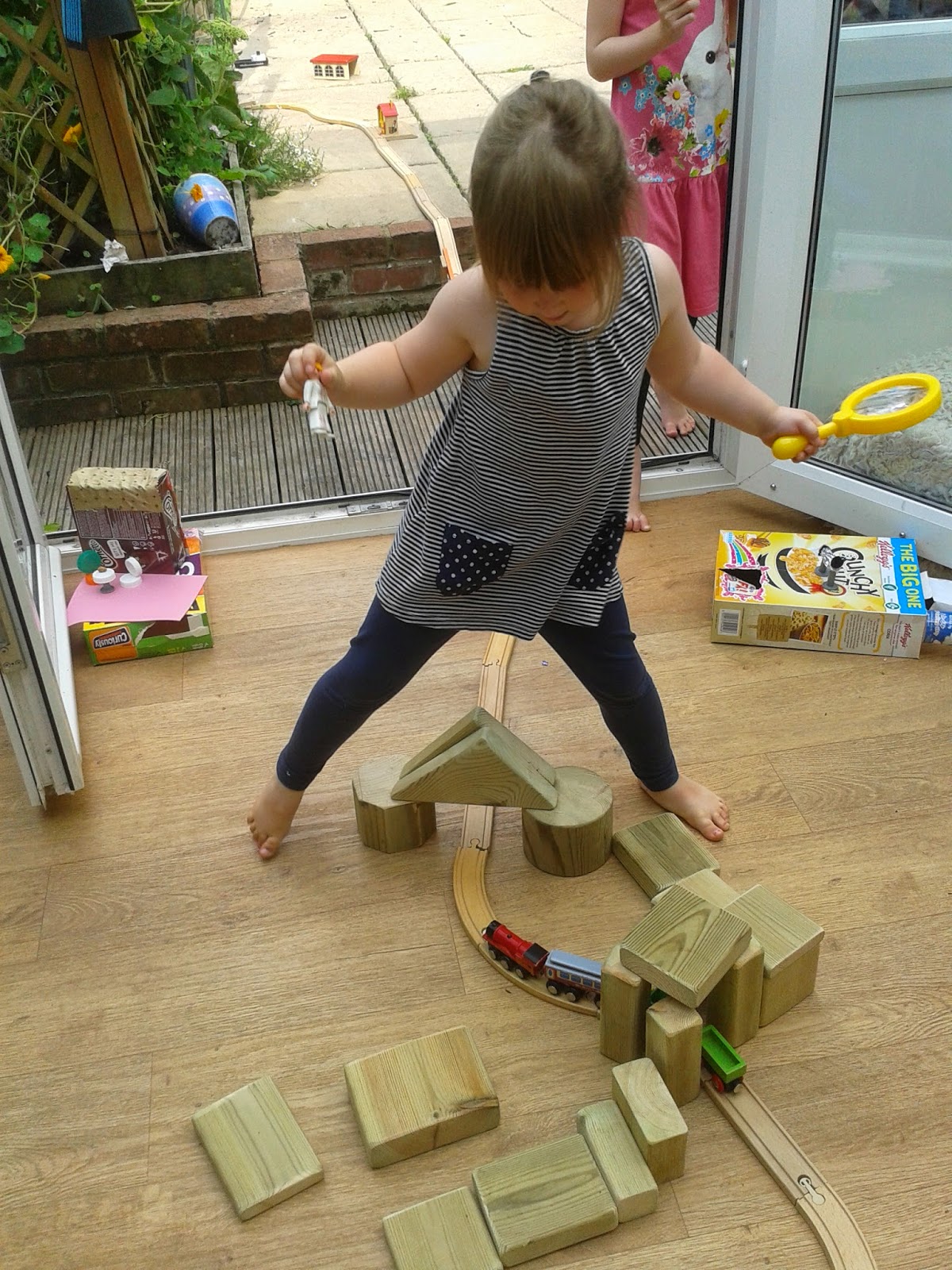 These have also been great when it comes to more physical play. Little “R” set up a Crocodile infested river and used the blocks as stepping stones. She re-created this several times a week over the 2 weeks that we have been testing these blocks. 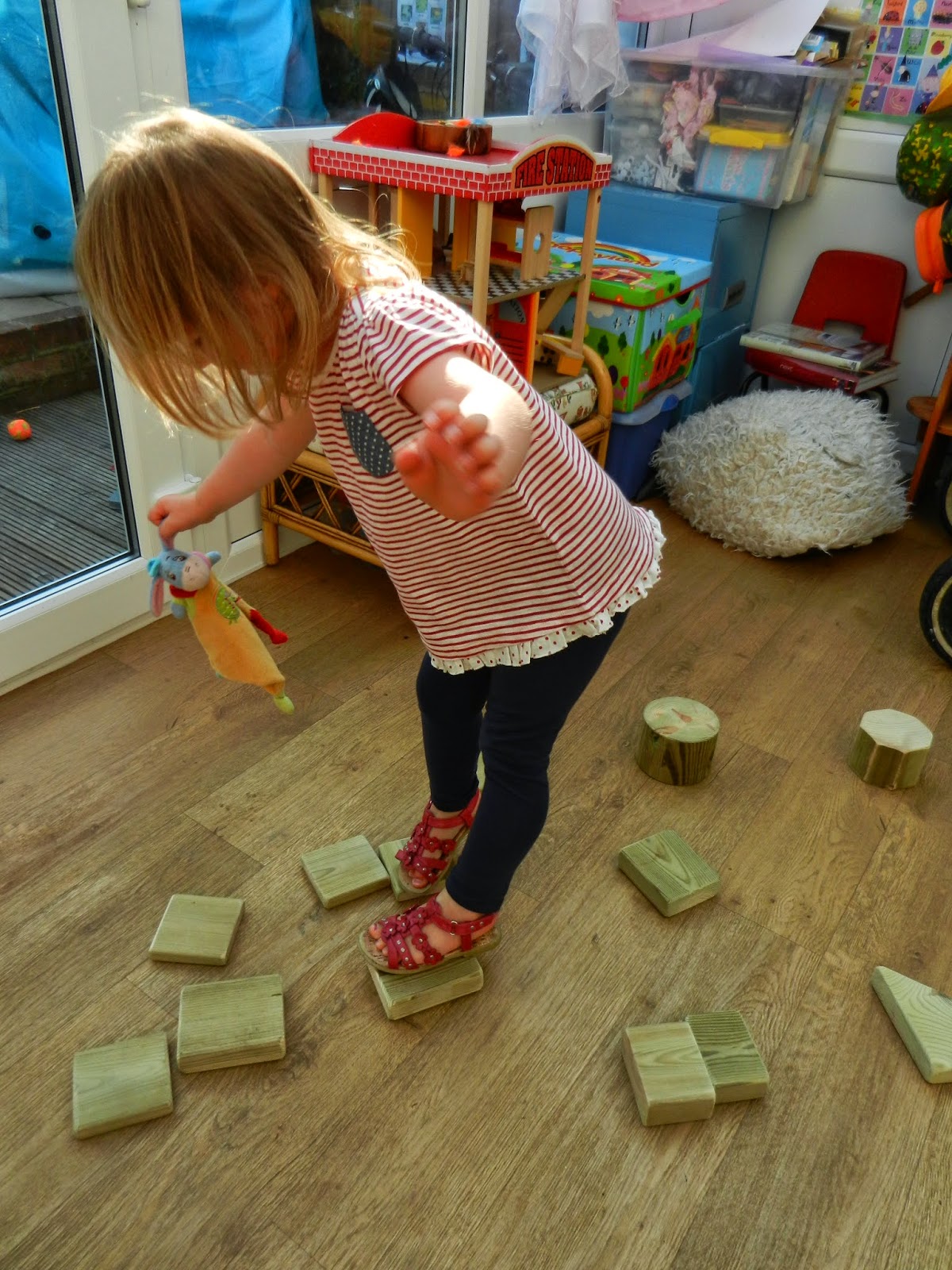 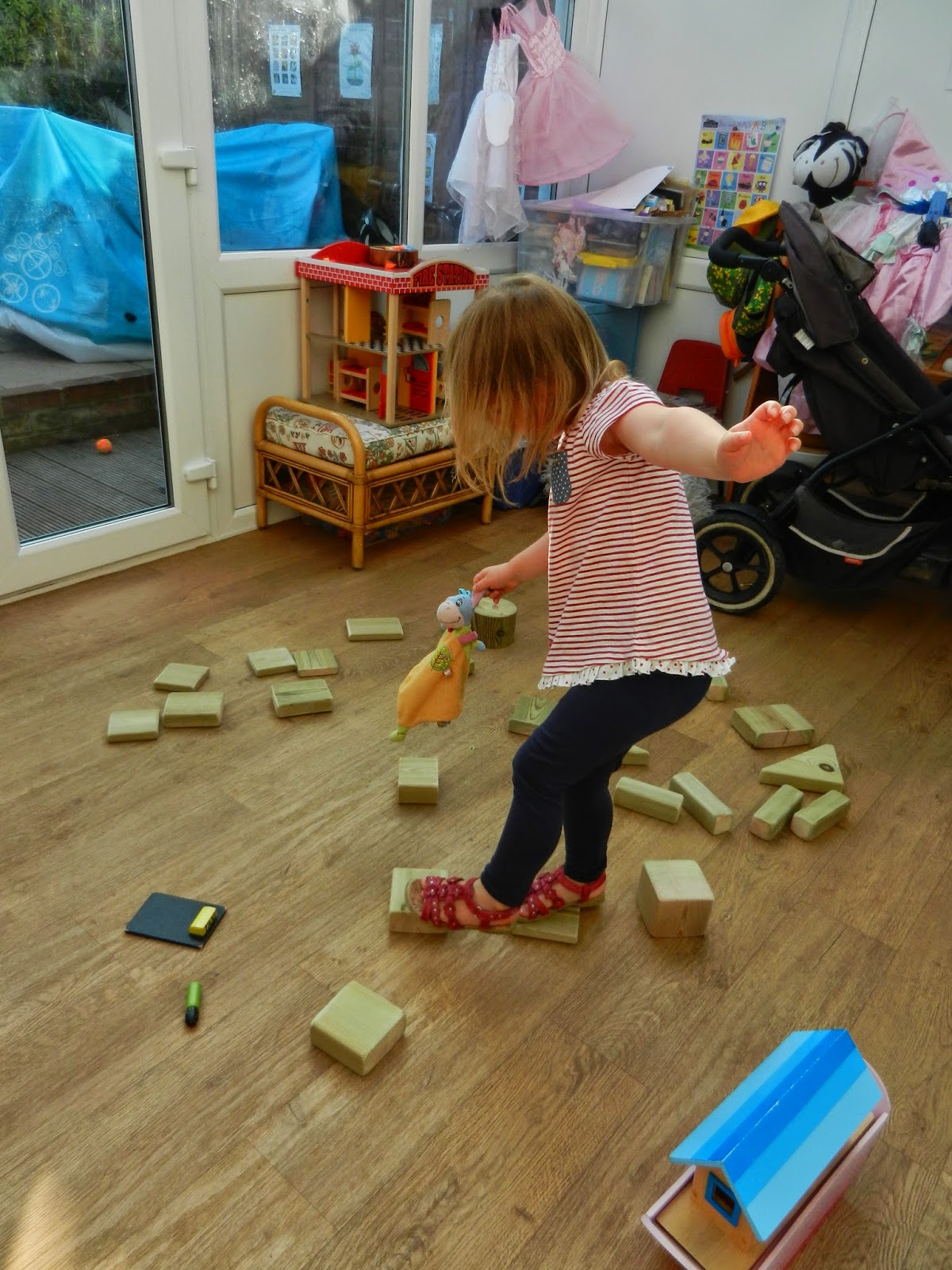 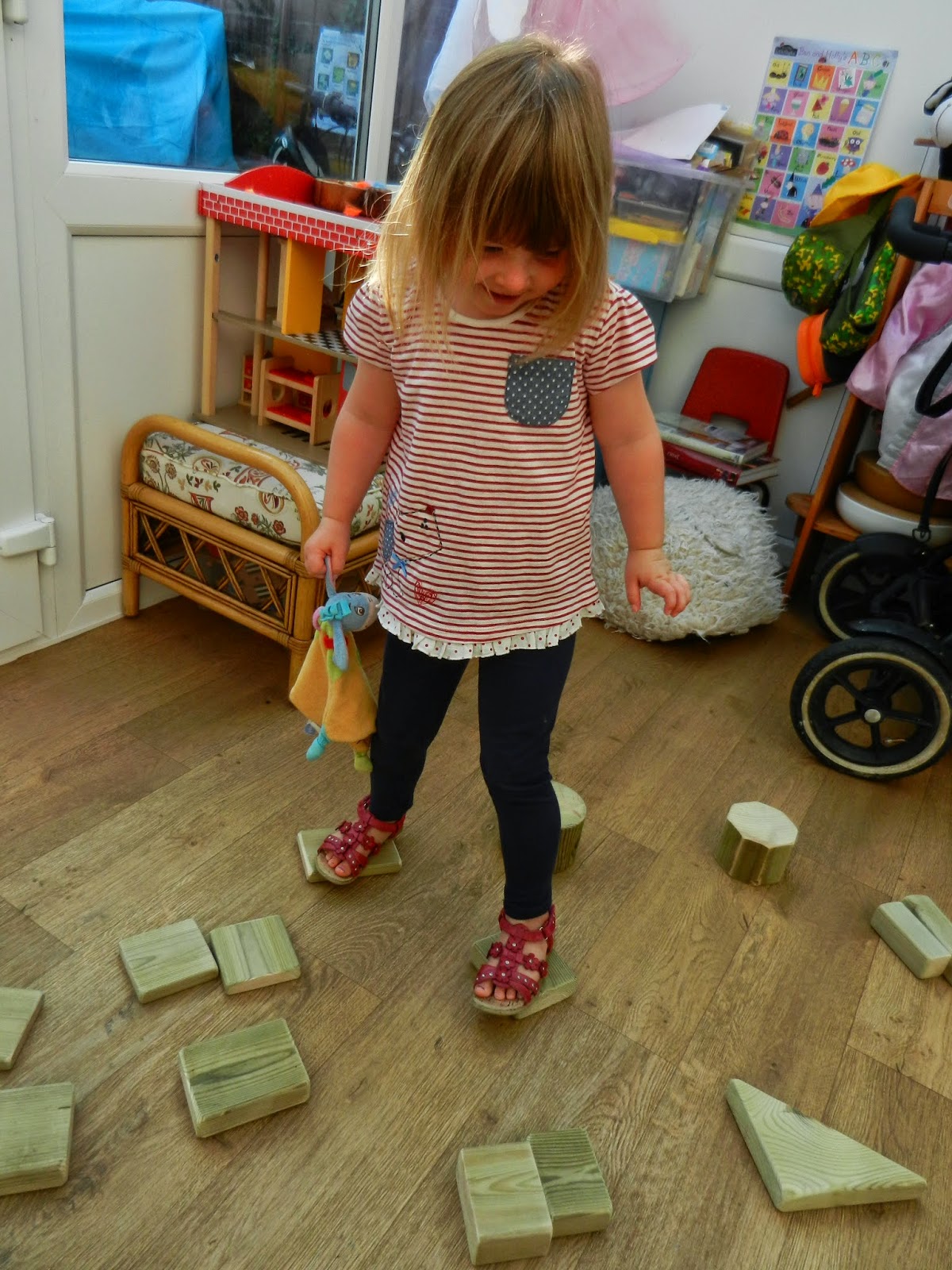 I would like to make it clear that I am not being paid to write this review and I want to be completely honest in reviewing them.
The children and I are enjoying the versatility of these blocks so much, that I will be purchasing a set. They are a good size, unusual shapes, light enough for little hands to build with and durable. They have withstood being used inside and outside, being stood on and being dropped.
They are now chosen by the children to enhance their small world and imaginative play and I have even noticed some of the blocks on the mark making table, being drawn around.
They encourage many areas of the EYFS including Physical Development and Expressive Art and Design.

Block play is a fantastic way to teach so many things through play and exploration. I have seen the children use them for problem solving, I have heard them talk about their size and shapes. Making comparisons and using mathematical language.

For the price of £29.99 I do feel that they are great value for money and I have just noticed that they have a special offer on for 2 packs at a reduced price of £39.99. The price is very competitive when compared to other, similar products that I have looked at. This makes me very happy, as my only negative point on this review is that I don’t think you get enough blocks to really use them to their full potential.

So a big thumbs up for these, from all the children at Worms Eye View!

TRAJECTORY SCHEMA GOES ON AND ON!