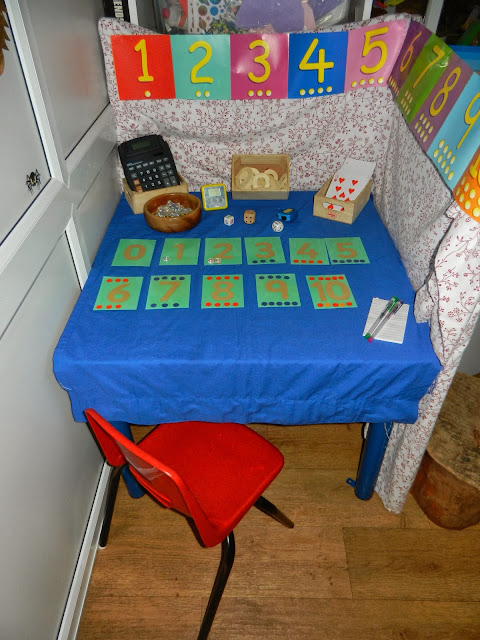 I wanted to have a week long focus on numbers and counting so started to explore the different ways we could do this. I felt the best way for children to start to recognise numbers and make connections with number names and counting, was to create a number rich environment for them. I wanted them to see how numbers have a purpose in our lives.  We use them to tell the time, count groups of items, number our homes, to gauge temperatures for cooking our foods. There are so many ways in which we rely on numbers to help us every day and by showing numbers to children in context, they can start to make links and understandings that are not as easy to obtain by just counting alone.

I set up a number station for the children to explore. I gathered lots of items that have numbers on them and placed them out for the children to use in their own ways.  I provided glass beads as counters, clocks, calculators, wooden numbers, sandpaper numbers, pens and pencils. I also added timers, dice, rulers and tape measures. Anything that I could find that involved numbers in some way. 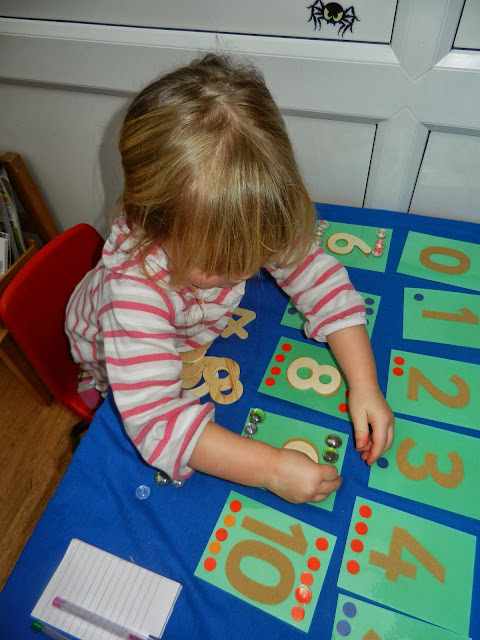 I added spots to the sandpaper numbers to encourage counting with the glass beads. I also used red for the even numbers and blue for the odd numbers. I am not sure if we will get as far as exploring this concept as the children are still very young but they may start to see a visual pattern with the spots, for themselves. 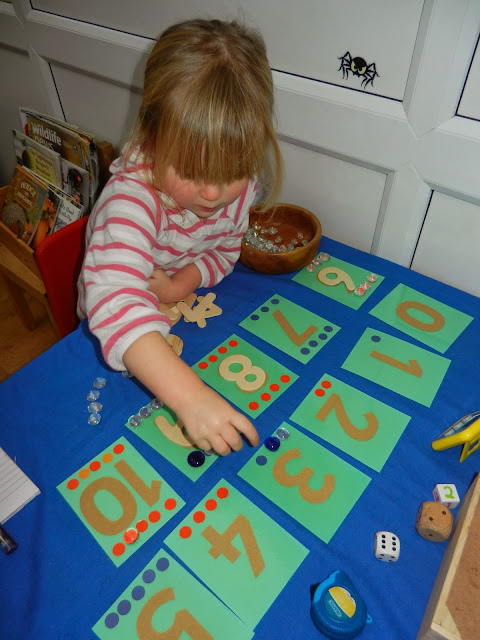 Little “L” used past knowledge of glass beads and spots from our Halloween counting activity and strait away started to add beads to spots. Counting as she did so. She then looked at the box of wooden numbers and found the number that matched. 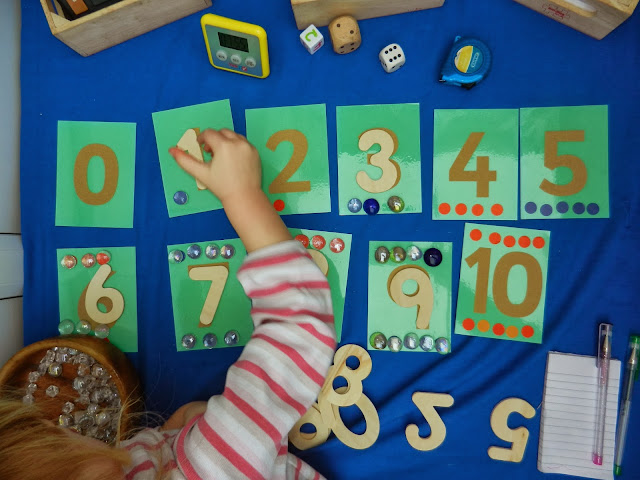 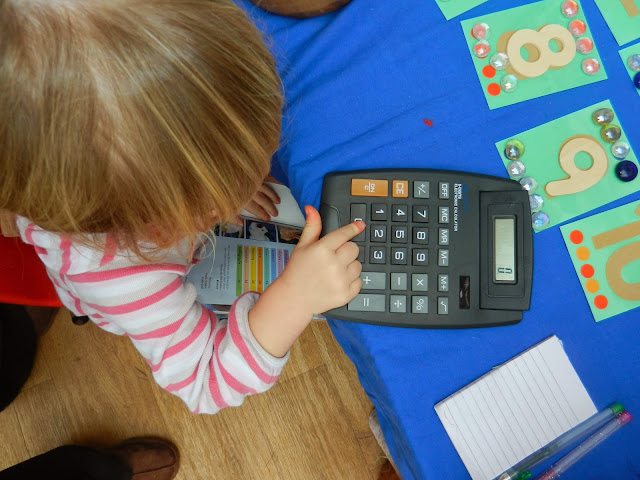 We spent several minutes pressing numbers and talking about what we could see and what numbers we were pressing. She had asked me to play too and passed me a calculator. These calculators were a great bargain from our local pound shop. The numbers are nice and clear. Big enough for the children to press the buttons with ease. 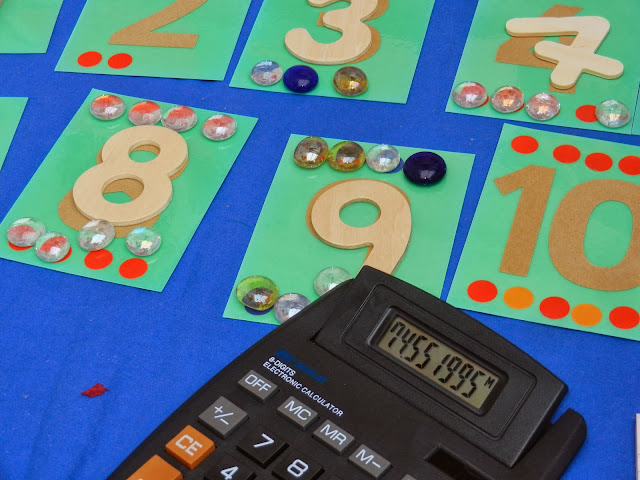 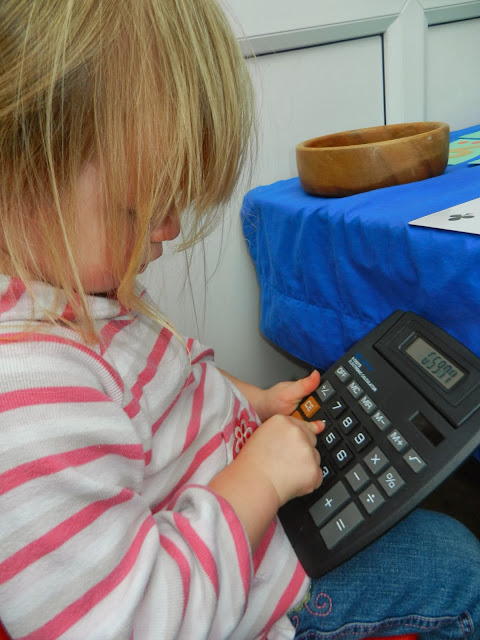 Some time later Little “L” moved on to look at the playing cards I had put out. Again these were over sized and £1 from the pound shop. She talked about the shapes on the cards and the colours. She went back to adding glass beads. This time to each of the suit icons that are printed on each card. Then looked for the matching wooden number. This was a bit tricky for the Ace cards as she needed a 1 but the card had an “A” on it. 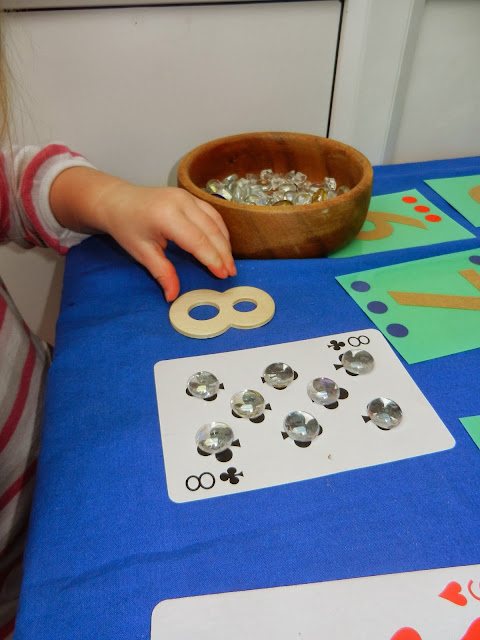 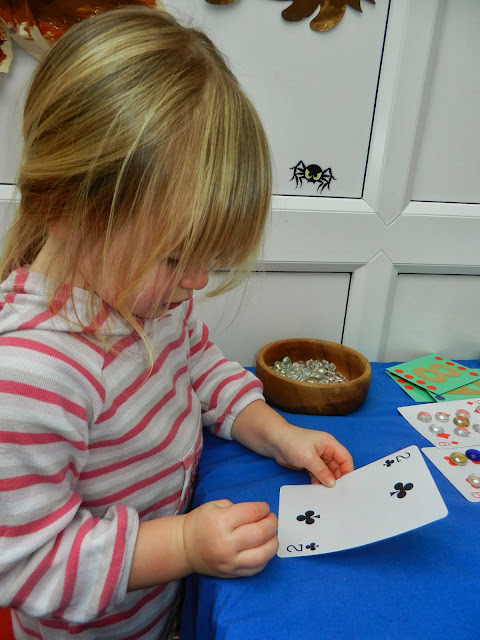 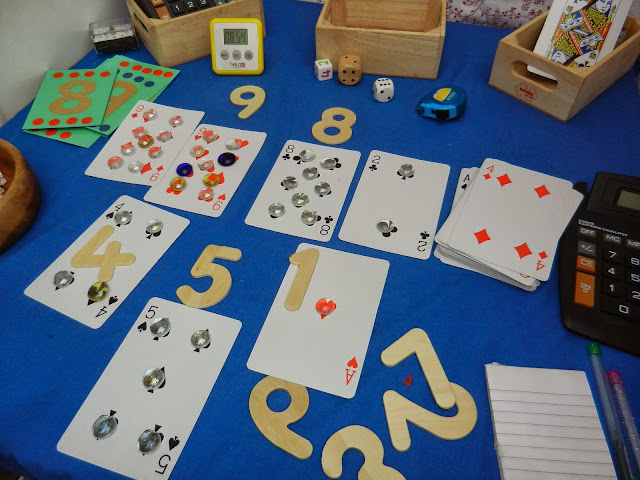 We looked at the penguin clock together. She set the hands on the clock and then asked me what the time was. We did this several times. Talking about what time is lunch, what time do we have naps, what time does mummy come? 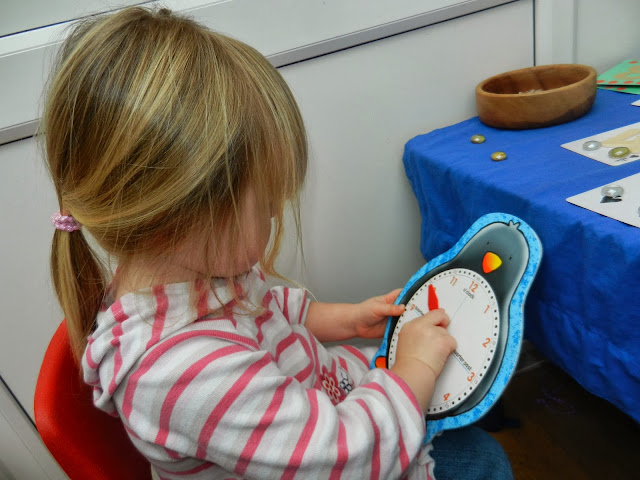 She played with the timer, setting the numbers and then waiting for it to beep! 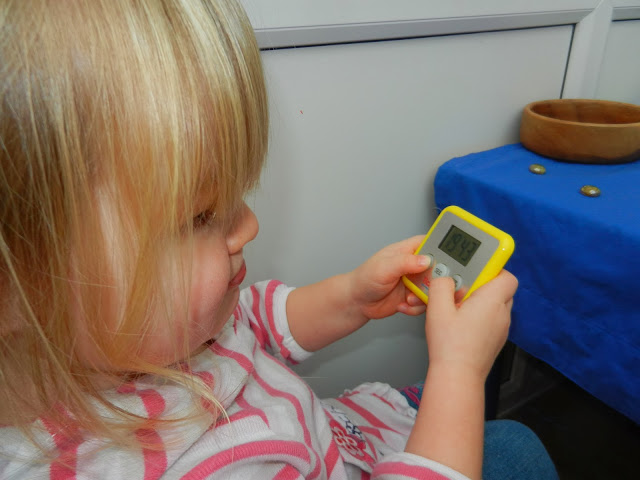 She played with the dice, rolling them, counting spots and stacking them up! 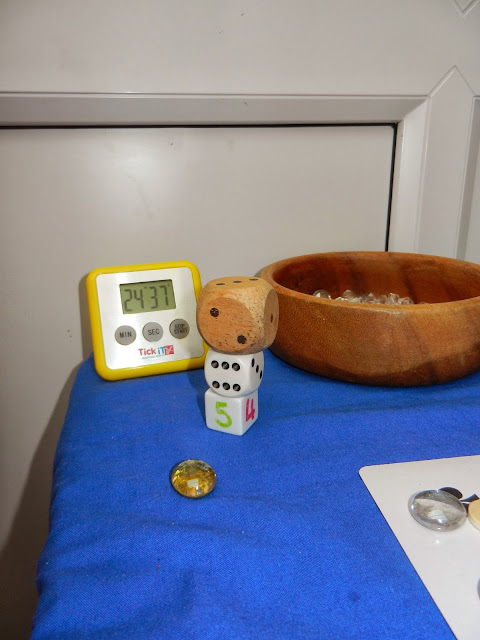 LEARNING INTENTIONS AND IDEAS FOR EXPANDING LEARNING:
This area was set up to help the children to become more familiar with numbers in our environment. To show that numbers have a meaning and a purpose, to show the different ways in which we use numbers every day. I hope that this will encourage counting, number language and number recognition. This was offered as a fun “Number Station” where the children could explore the resources and make links and connections in a safe place where there is no right or wrong way to do things. Where there is no pressure to get the answer right. As the week goes on I hope to add to this area with more pictures of numbers in our environment. The children and I will have number hunts when at home or walking outside and then take photos of numbers that we see. I can then print and display these numbers in our “Number Station” for the children to look at and talk about. Making the numbers more meaningful to these children.

Little “l” was first to explore the “Number Station . She showed instant interest and felt motivated to give it a go. She didn’t recognise any numbers when we started. But she did ask a lot of questions about numbers that were relevant to her life and the people around her. She used past knowledge from our Halloween counting activity and applied it to this area, using the glass beads as counters on the sandpaper number cards and also the playing cards. She was keen to keep trying even when she got stuck with the counting or could not find the correct wooden number. With gentle encouragement and the occasional prompt she could count to 10 and managed to match many of the wooden numbers to the numbers printed on the cards. This helped her to make the link  between the quantity and the number. She showed great enjoyment in achieving her goal of completing each card and came back to them frequently throughout the day.
She spent a long time exploring the calculator and clocks. Recognising that the clocks represented times in her day and making links with specific times of importance within her daily routine. At other times of the day she started to notice numbers within her environment. The numbers on the TV remote control and the telephone for example. Throughout the day Little “L” showed sustained times of concentration and involvement. Using her own ideas and thinking critically about how she wanted to use the items provided.
Today’s play, meets the following EYFS Prime and specific areas