Thursday was my first day back at work after the Christmas brake. I had been thinking about continuing our look at animals living in cold climates,  which I started before Christmas and thought it would be fun to set up a sensory tray with ice and some coloured water in.

I played a small storage box in the freezer with water on and added a pirex bowl to it so that there would be a pond indentation in the ice once frozen.  To remove the bowl I simply added a little warm water inside to heat it slightly and it soon came out with ease.  I mixed some blue food colouring to the water and added it to the pond indentation.
I added some animals that live in cold climates to the tray and also some ice cubes so that the children could build with them.

Once I presented the activity everyone seemed keen to come and explore it.  I introduced new words like “frozen, chilly and solid”. The children used lots of descriptive words like “cold, icey, slippy and hard” during their play and exploration.

Little R told me the penguins were slipping over on the ice because the ice was very slippery.

Little X told me that his hands felt cold after playing in the water and ice.

Both X and R wanted to warm their hands up on the radiator after playing and had made the connection between sources of heat and how to get warm after playing with cold water.

As the day went on,  the children would return to the tray and talk about the changes to the ice.

Little R told me that it was slushy and had melted.

Little X told me that there was more water and the ice was going now.

I introduced words like “defrosted and defrosting” and asked the children why they thought it was melting.

Little R told me it was because it was warm.

Characteristics of effective learning.
During this activity all of the children appeared motivated and interested.  They all seemed to have some personal knowledge of cold weather and the changes of water in to ice.  This has probably come from past play activities that we have enjoyed as well as noticing the changes in our own environment during winter months.  The children have also seen the change that takes place when we make ice lollies in the summer. They used current knowledge and transferred that to this. 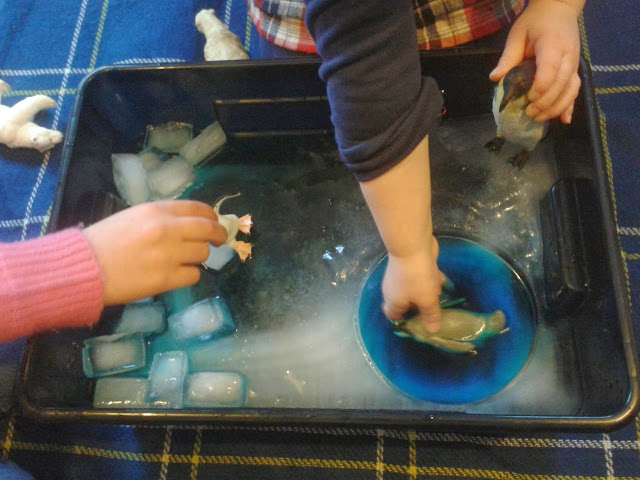 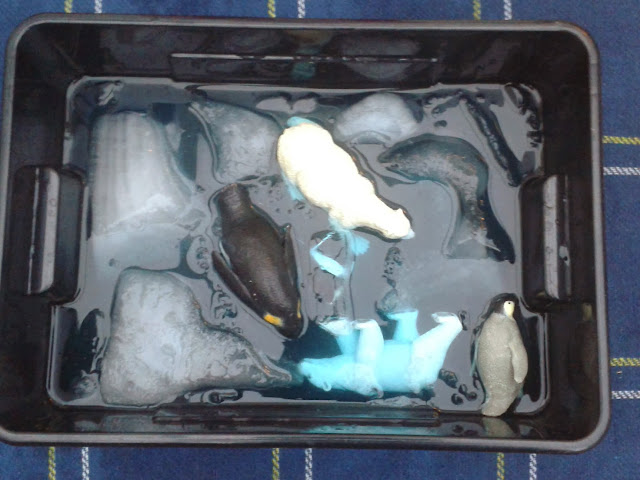