We have been enjoying a family week! It is a rare thing that i take time off but we all felt we could do with a week together. We have enjoyed several day trips and we spent Tuesday in Oxford. It is funny that the the things that are on your door step are the ones you visit least. Why is that? We often do the museum but we have never done the Oxford Castle. So we did both on Tuesday!

We started at Pitt Rivers museum. This has so many cool things to see and I have mentioned it in previous posts.

I noticed that this time, that Brendan spent more time reading the information cards, just like he did at the Zoo at the weekend. In the past he has zoomed past things and rushed around the place. Kenzie was also very much the same on past visits but he too was stopping and reading everything to me. He is really making use of his improved reading skills and I can see the pleasure it is bringing him.

Kenzie had one request on this visit. He wanted to find the Dodo. He had lots of questions about why they are extinct and why people would be so mean and hunt it to extinction. I explained that sadly some people feel they have the right to shoot and kill any animal they come across, in the name of “sport”.

The boys wondered if we could extract any DNA and recreate a Dodo in a lab and bring it back…… i think they have been watching too much Jurassic park! 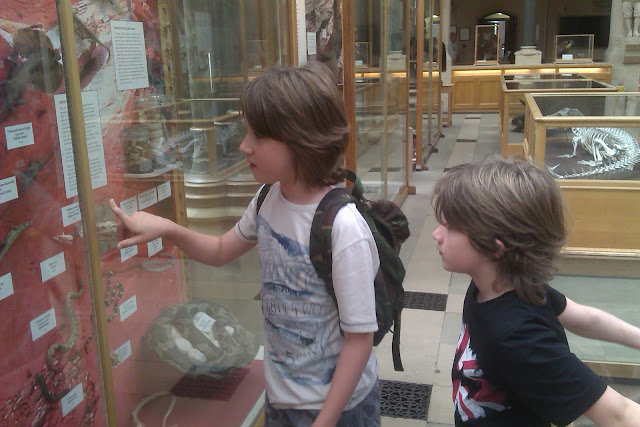 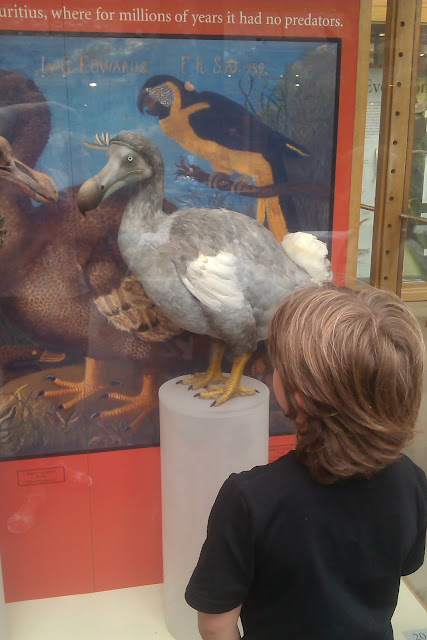 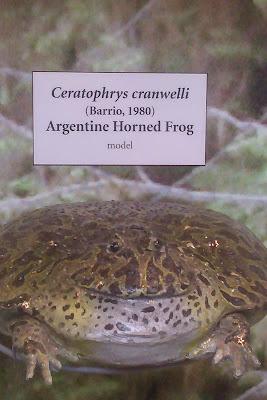 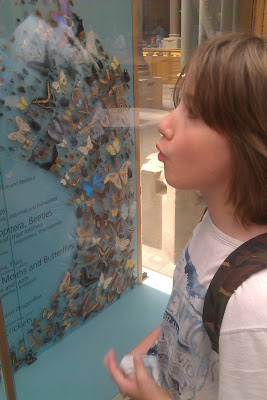 After a very long time of exploring old fashioned toys, magical wort cures from olden day witches, dinosaurs and shrunken heads we popped in to town for a spot of lunch before going on to visit the Oxford Castle.
We didn’t have long to wait after buying our tickets, so the boys had a run around outside and found some stocks to explore! I did explain to Brendan that this was not designed for his head, but for his hands and feet.  He thought his way was better though….. Kenzie was only too eager to help! 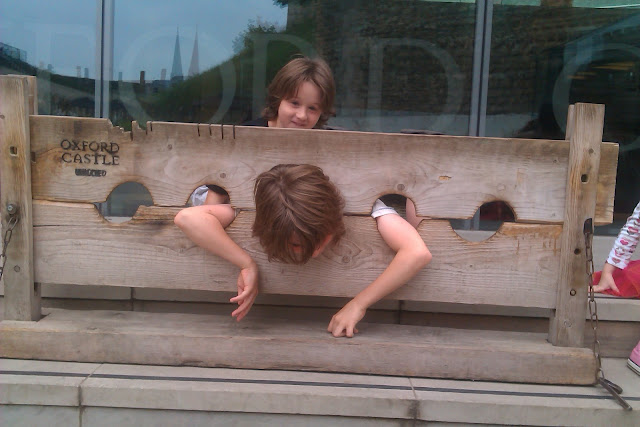 Now he can’t move….. Kenzie thought it would be funny to smack his brothers bottom! 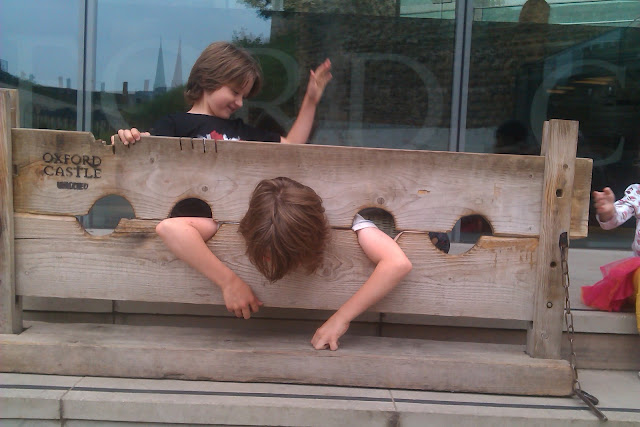 We had a wonderful tour guide who played her part fantastically. We learnt how the castle became a prison were told some of the stories of the people held there. I was stunned at how harsh the conditions at the prison were even up until 1996 when it was finally closed.
We got a wonderful view of Oxford from the top of St Georges Tower, after climbing the 101 very steep spiral steps! 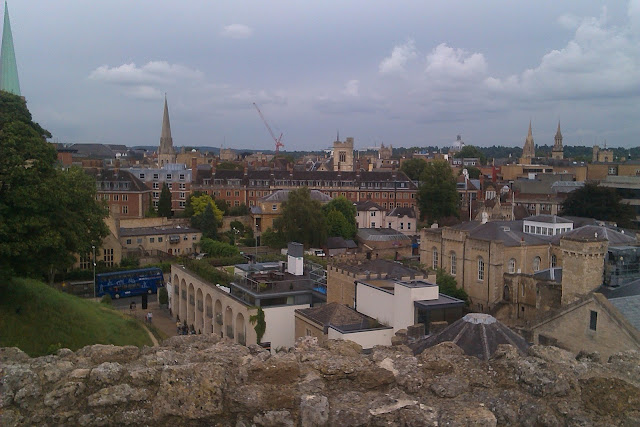 Kenzie walked around the tower looking through all the holes! 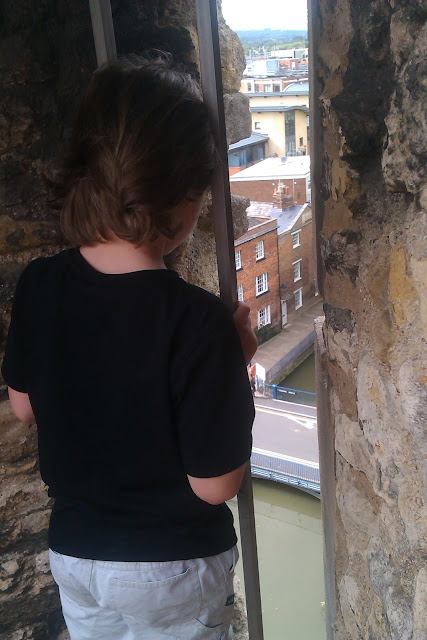 A highway man was waiting for us on our return but he gave up when he realised we had nothing for him! 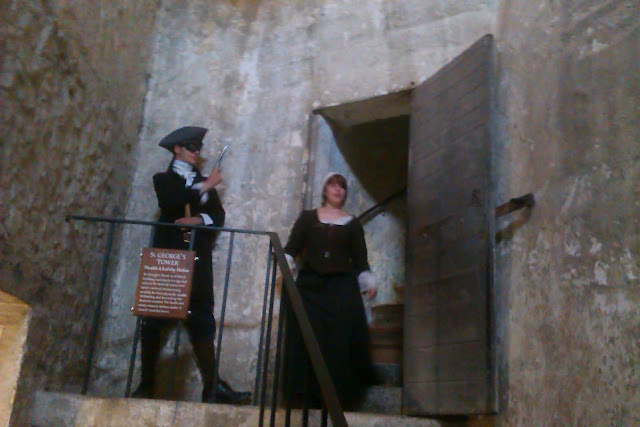 We went down to the crypt and were told all about how it was used for storing food as it was so cool down there….. and for storing dead bodies as well…. Ewwwwww!
The boys stood for a photo in the Haunted corner! 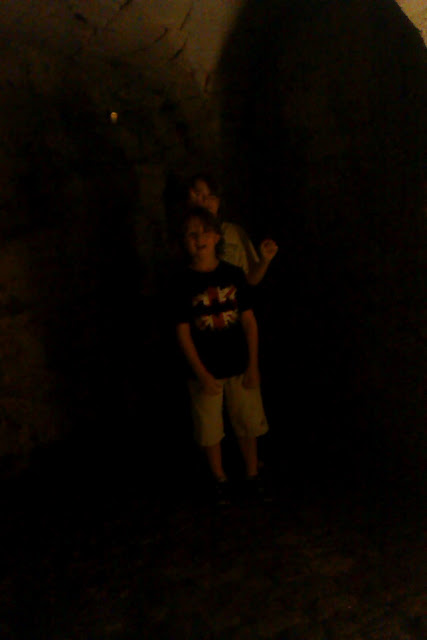 The boys then got to check out the cells and had their photos taken, ready to be processed in to the prison. 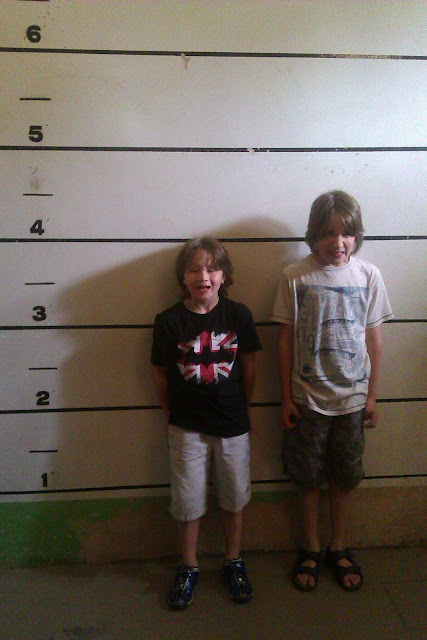 Brendan had his mug shot taken as well. He put on his most evil face……. I was scared! 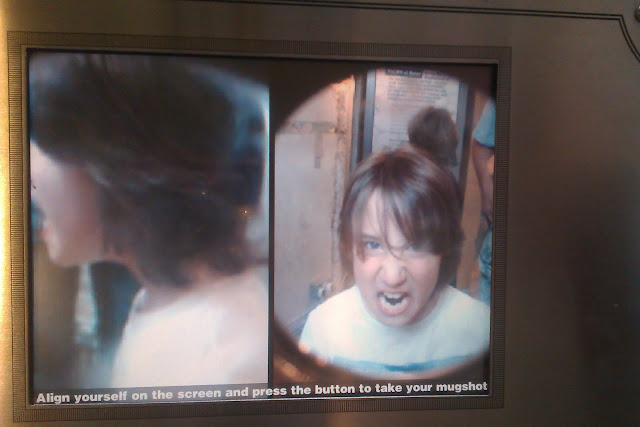 The boys got dressed up for the part! 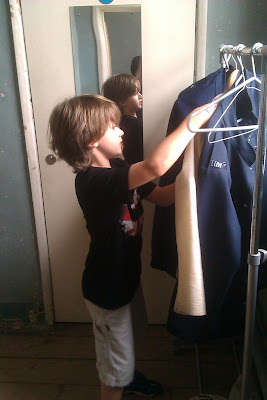 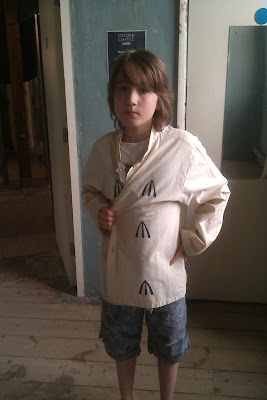 And then they were put to work. They tried out the treed mill. Brendan did 100 steps and I explained that prisoners would have to do about 57,000 steps each day! Kenzies little legs really struggled to make it move. He was too light bless him. He did 10! 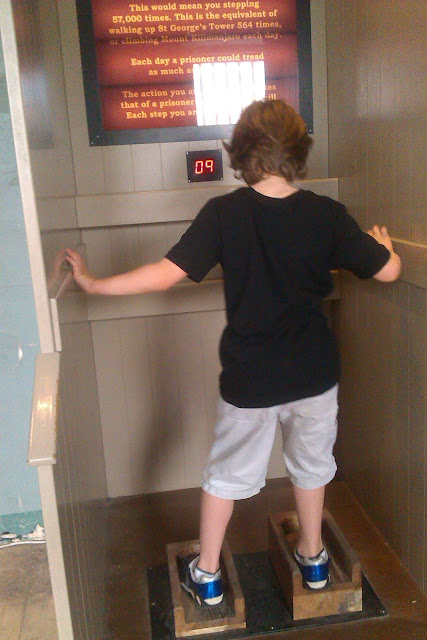