Phobias….. I am not really scared of many things. I am in no way a big brave soul either, but I don’t have many day to day fears. I love bugs and reptiles. Birds are my friends, heights make me a bit dizzy but I wouldn’t say I was scared of them!

Big spiders…. and I mean the sort that crawl in the house during Autumn and decide to run across your floor or worse still….. your BED! WITH YOU IN IT!! They can stay away from me! I guess I am actually scared of them. I will not touch them and run the other way if I see one. I worry about them being in my room at night and if I see one then I will not rest until it has been shown the door…. via the window!

I don’t know why they bother me. They are no different from little spiders. But I guess you can see their fangs and hairy legs in more detail when they are bigger. If they were not an ominous black colour then I would probably like them more. If I imagine a pink or purple spider of that size then it doesn’t seem to worry me as much. 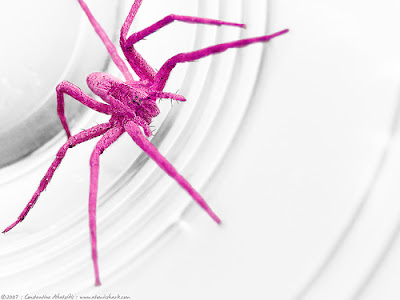 Ok….. actually that is not as great as I had imagined!

I did actually hold a tarantula at  Easter this year! 40 years I have been building up to that! It was a bit scary and I am sure if she had crawled on my hand rather than sat still I might have panicked a little.

I guess the one thing that really does scare me though is being buried alive! I think it stems back from a comic my brother had when I was little. He is 6 years older than me and had these spooky comic books. One story was a bout a guy locked in a tomb and forgotten about. All that was found years later was his bones and scratch marks on the lid of the casket. EWWWWWW!!!!
I can’t stand anything that leaves a person with such a sense of doom and hopelessness. I can not watch any film that has an element of this.
I hate small spaces too. I can’t even sleep in a sleeping bag. Far too enclosed!

So those are my fears! I guess worse still would be trapped in a small tomb filled with big spiders……

ok I will stop now before I totally freak myself out!